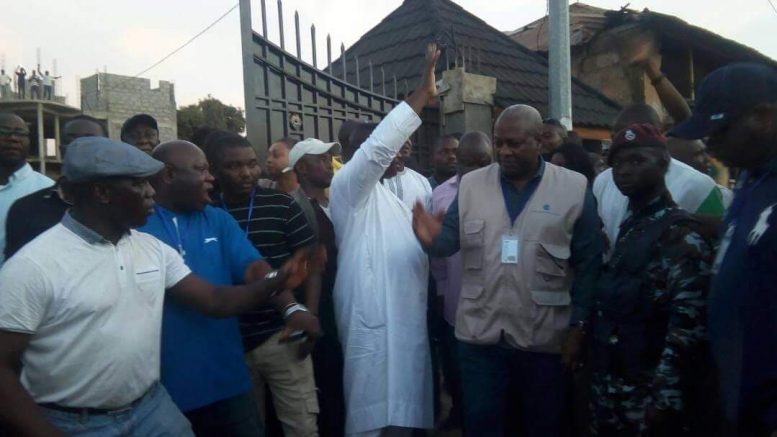 One thing should be very clear to everyone: the FAILED APC cartel is using their latest satanic “TACTIC” as a ploy to undermine the vigilance of SLPP supporters and derail the election in their crooked direction by creating chaos in the country.

This is a really dangerous stunt that shows just how very desperate the APC has become.

The problem for the APC was that having appointed a gravely unpopular candidate over and above much more deserving others they found themselves strapped to an unwilling fumbling academic and moral FAKE whose only legitimate credential was his proximity to EBK, the one man who appointed him and anointed himself as “chairman for life” of a very unhappy party.

Sensing that his “stooge” cannot make the count the president and his confidantes launched into another phase.

No wonder when the retired brigadier and his team of patriots were crisscrossing the country campaigning day and night for votes, the Tolongbo Talabis were busy dishing out wads of money, T-shirts etc to rented crowds to dance for them on the streets.
No wonder when the retired brigadier was busy drawing up his policies to lift the people of this country out of poverty, the Tolongbo miscreants were busy attacking every other party supporter and fighting with lifeless posters just to intimidate voters.

Then they went for their “ambulance tactics” and used their “powers” to stop vehicular movements throughout the country, hoping that they would be able to ferry their thugs from place to place intimidating voters and violating their votes.

But the Tolongbos grossly underestimated the determination of the people to get rid of them forever. And they also failed to consider the fact that the WWW (web) has torn the veil of secrecy from the darkest of far-flung places.

So when news started streaming through of their unmarked vehicles with unmarked number plates being caught loaded with people and suspected to have election materials, even the dumbest of APC leaders knew that their day is over.

So to distract us and create chaos around the country they decided on this latest stunt (surrounding the office of the SLPP presidential candidate) which is at once laughable as well as tragic.

The tolongbo thieves have just behaved like madmen playing with fire and threatening to burn a house down because the bailiff is on his way to ask for the key.

In all of these unfolding shenanigans we are confident that democracy will survive, our people will regain their hopes and Sierra Leone will rise again.
And to aid that rise the SLPP has made its position very clear:
WE WILL NOT ACCEPT THE RESULTS OF A RIGGED ELECTION!
NEVER!!!

ONE COUNTRY, ONE PEOPLE!
Forward to victory!