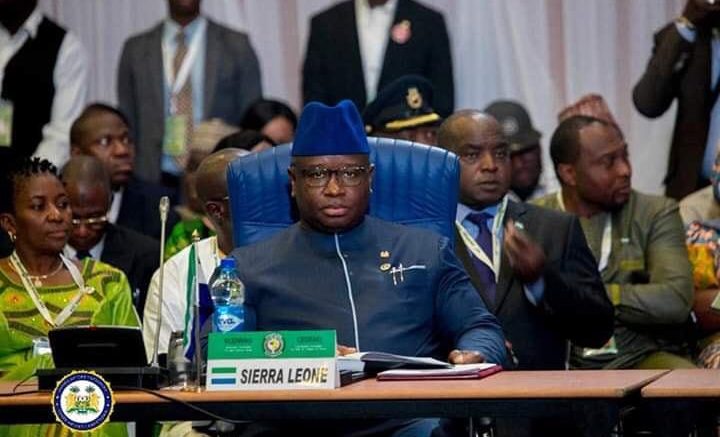 President Julius Maada Bio to urge ECOWAS to follow through on commitments to fighting corruption, improving defence and democratisation.

Transcorp Hilton Hotel, Abuja, Nigeria 22 December 2018– The fifty-fourth Session of the Authority of ECOWAS Heads of State has opened in the Nigerian capital, Abuja, where His Excellency President Julius Maada Bio will urge a close meeting to address corruption, defence and democratisation in the region.

In particular the President hopes to call on the authority, which comprises a selected number of former and sitting presidents, to make public the full outcomes of the forensic audit of its finances. He has always emphasised that ECOWAS must lay bare the full extent of systemic corruption and put in place systemic, cultural, and personnel changes needed to restore probity and transparency in the economic union.

The President will also engage the day-long meeting, which brought together President of the ECOWAS Commission, H.E. Jean-Claude Kassi Brou and the UN Representative of the Secretary-General for West Africa and the Sahel, H.E. Dr Mohamed Ibn Chambas, to fast-track the effective and coordinated implementation of the defence and security sector reform programme, especially regarding support to the ECOWAS mission to restore democracy in The Gambia.

He believes that the commitment to contributing troops to the ECOWAS regional defence and security effort is very important and welcomes the decision of the sub regional group to escalate funding of the construction of the Lungi logistics depot in Sierra Leone.

President Bio will emphasise the need for democratic good governance in the region, the establishment and respect for governance institutions and instruments that ensure presidential term limits and the promotion of peaceful and credible elections processes.

Earlier in the opening session, the host, His Excellency President Mohammadu Buhari of the Federal Republic of Nigeria and current chair of the ECOWAS Authority of Heads of State, said he had promised a peaceful, credible and fair general elections which are due on 16 February 2019.

ECOWAS is the Economic Community of West African States, a union of fifteen countries established on 28 May 1975 with the signing of the Treaty of Lagos. It mission is to promote economic integration across the region.