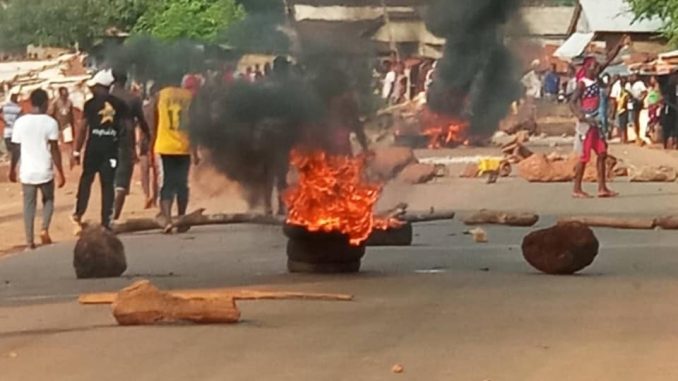 ADEBAYOR WANTED FOR ACTS OF TERRORISM IN SIERRA LEONE

There’s only one paradise for Sierra Leoneans on the face of Earth. We all know what we went through during the 11 years war that took the lives of thousands of innocent citizens of our country. The madness was beyond description. Innocent people were amputated, pregnant women were dissected alive with their live fetus taken out of their bowels. We saw the madness that beats all human imagination.

For the past two years, we have heard people claiming to be supporters of the APC persistently fanning the flames of war, lawlessness, and subversion in our country. As Sierra Leoneans, we are all bound by the duty of care for our compatriots and the peace and tranquility in our country.

Abdul Will Kamara, an asylum seeker in The Kingdom of Netherlands has for the past two years been inciting war and violence in our country which has degenerated into all-out mayhem that has started to threaten the hard-earned peace the International community and Sierra Leonean authorities fought painstakingly to secure in the interest of peace and prosperity for the people of our country.

In light of the aforementioned, I am calling on all Sierra Leoneans to call the Dutch Police from where ever you are in the World and submit a report against Abdul Will Kamara (Aka Adebayor). It is our duty to protect lives and properties in our country, because the life you save may be your own. Let us call the Dutch Police and remind them that it’s a known Dutch law that no individual, both foreign and indigenous shall use the Dutch territory as a launchpad for rebellion and subversion anywhere in the World. That we hold The Kingdom of Netherlands in very high esteem and regard the people of that country as peace-loving and very law-abiding. A country that stands at the forefront of the Global campaign for peace and human rights, hence the reason why the International Criminal Court is hosted there. It is, therefore, counterintuitive for a man who sought asylum in such a highly respected country, who told the immigration there that he ran away from war to be inciting War in the country he said he escaped War from.

If you are a peace-loving citizen of Sierra Leone who loves our country dearly, regardless of your political affiliations, I urge you to the herein posted Dutch Police contact number to make a report against Abdul Will Kamara and request their email address in a bid to send them videos and audio evidence of his numerous inciting messages and the videos of the outcome of the said messages.

I trust the resolve of the average Sierra Leonean when it comes to the love of our beloved Sierra Leone. It is my fervent hope that we will take up the responsibility bestowed upon us as Sierra Leoneans by birth to stand up for our country and report Abdul Will Kamara to the Dutch Authorities and ask that they enforce their laws in an effort to protect the peace in Sierra Leone they played a pivotal role to secure, by expelling Abdul Will Kamara of EINDHOVEN, Southern Netherlands from their country in accordance with their Penal code which clearly states that it is an unacceptable criminal offense to use Dutch territory as a launchpad to promote War, hate, and subversion anywhere I’m the World. Certainly not by an asylum seeker who is not even a Dutch citizen.

Let us overwhelm them with calls and put the level of outrage in context. Let the Dutch Police know that Sierra Leone as a nation expects them to take swift action against Abdul Will Kamara AKA Adebayor in a bid to send an emphatic message to anyone who may want to be a copy cat of that felony in The Kingdom of Netherlands, that the Dutch government doesn’t condone anybody using their country as a haven for terrorists and warmongers. Arise and fight for Sierra Leone
GOD BLESS YOU AND GOD BLESS OUR BELOVED SIERRA LEONE.