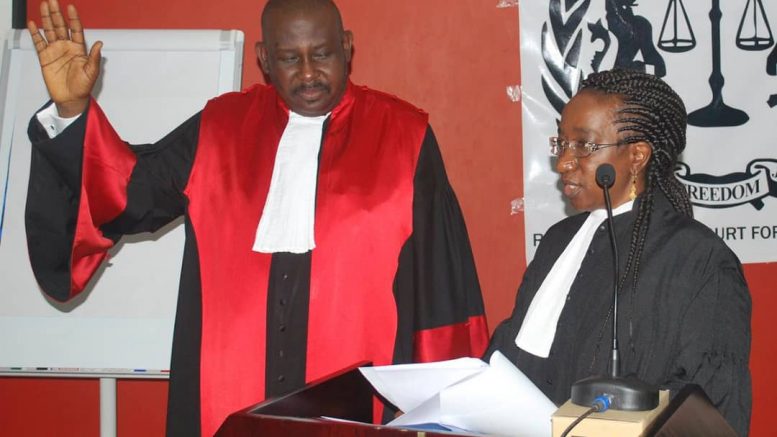 The verdict of the Treason Trial, pronounced yesterday in a Sierra Leonean high Court in Freetown, should go viral. That singular judgment is highly significant on many fronts. It knocks down a huge scab of the many decades of crusted rot from a usually heavily shackled judiciary and it signals to the world that the Rule of Law is being freed from the imprisoned strangleholds of its historical filth. Whatever other interpretations may emerge from this, one verdict should be clear: under this bright and brave New Direction, Sierra Leone is emerging from the medieval bloodletting politics that characterised many of our past regimes to embrace a level of democratic decency that most had long decided had dissolved in the dreams of our independence illusions.

Of course, for any fair minded observer of our tortuous national political journey, it would have been easy to spot the emerging strand of freshness. Right from the start, the signs were quite clear that this was going to be a very positive and potent presidency. Some only began to notice President Bio’s resolve when one of his centre piece outfits, the very grabby and sharply toothy ACC went to court with the SLFA presidency, and lost. People couldn’t believe that any African (never mind Sierra Leonean) government (agency) could “go to any court in its own country and lose a case”. A case as high profile as that put forward by an outfit as solid as the current ACC. The government didn’t “push” for anything “dirty” and the brilliant ACC boss came out with a golden line: the ACC is not fighting corruption to win foully but to win fairly for all Sierra Leoneans.

For many, the truth became increasingly apparent that President Julius Maada Bio’s rightly earned title “Talk and Do” was not forged from the idle furnaces of our suspect political wordsmiths who coin phrases from the air and dish it out at will. It was a title of “Thank You” from those who actually know the man- the people themselves. Did he not shock the political world by seizing power and cleanly handing it over, in just three months? Was that not the time when he was far younger and therefore more likely to be trapped into the cocooning softer bellies of tempting state power? Was that not also at a time when the fierce and feared RUF rebels wanted to talk Peace that had eluded us for all those many years and were urging the postponement of elections as a pre-condition? And did Maada not have to contend with a war-weary army that was understandably reluctant in handing back power, so soon, to civilians “to mess it up again”? Who chose democracy over all of these potential minefields? Are we then surprised that President Julius Maada Bio is credited as the champion of democracy in modern Sierra leone? First, he joined his comrades to overthrow a deeply corrupt autocracy with a stench oozing from pillar to post. Then he risked his life, again, to rescue that democracy and went on to honourably exit the stage without wasting a wink.

Welcome to the country of “Talk and Do”! For here is one African president who truly says what he means and really does what he says!
Let us just accept the facts: this is the first time that a treason case has gone to court and the “First Accuse” is allowed to walk free from the charges, without even a single slap. Does that golden line from the ACC boss not loudly re-echo the wonderful underpinnings of the moral foundation of this New Direction?

Those who would like to judge the latest court judgement as purely a matter of law would be certainly right, but in their certainty they would be missing one crucial point: no matter what anyone tells you, in Africa in general, the laws can (and they have) bowed down, low, to the whims and wishes of a ruling Head of State and worship his every whisper. That is, if he is so inclined towards such a wish. And in Sierra Leone in particular, when it comes down to a question of “treason” the verdict has always been read as red a long while before the charge sheet is pronounced. Never the reverse. And that is just the ugly fact that our country has been used to. We have a pile of bodies starring at us from the archives to prove that!

When a case is titled as TREASON, forget your grammar. Forget your laws. Evidence? You do not even need to have a pen under your pillow ten miles from State house, talk less of a loaded pistol taken into State House. Bash Taqui only had his Parker pen. Too potent for comfort. Minah had his “walkie Talkie”. No, he didn’t. It was seen with GMT Kaikai. That, and the fact that he was seen attending a “Public chiefdom meeting” with Hon Vandi Jimmy was enough for Abdulai Conteh to nail Minah to the gallows. Public figures should never attend public meetings with other public figures. Period!

And S.O. Williams? We don’t know what he had. Some claim the man had too much knowledge about the disappearance of monies too huge to call. So he was not allowed to come to court. Easier to shoot a man in his sleep!

The damning history of our political drama is definitely not a smooth stagecraft. It runs like a leprous school of witchcraft: under the APC, we have seen an elected Vice President dethroned without him spitting a mucus; we have witnessed another Vice president hanged by the throat. We have seen men thrown over balconies to crash to their untimely deaths. We have seen others rounded up while asleep and choked around the throat, on the basis of a lie, until they coughed their last. We have seen a man shot in the head after he had been forcefully retired from the army and we have heard about a past love-rival burnt in his own home.

Not a pretty sight. Not a pretty history. Not at all!
It has been the sadness of our story that in the past, many have hanged from the gallows and parted with their ghosts, some of whom never even touched a gun talk less of daring to head to the seat of power with a lethally loaded “metal”. So the fact that Palo Conteh has been pronounced “not guilty” of treason is one solid proof that Sierra leone is indeed heading in a New Direction in the best of senses.

That is why I would strongly applaud President Julius Maada Bio for mercifully standing back and allowing the Judiciary to act in total freedom. Very strange in a country that puts such a high premium on crushing one’s political opponents once they put themselves in the cross-hair!
But then, this is not the first time president Bio is acting so fairly and selflessly, even when his own life is dangling in the scale.

This should take us back to the day he overthrew Strasser in a palace coup. It would be easy to speculate what Strasser would have done had that ouster failed and it is even easier to guess what many military men would do to those they overthrow. Before the dust is settled, a very different announcement would have been heard. But even at the height of things when Strasser was at his absolute mercy, Brigadier Bio refused to call up the firing squad. Instead he decided to commission a helicopter to fly his ex-boss to the safety of Guinea. Before the pilot and his crew left they got strict instructions warning them against any harm inflicted on Captain Strasser.

President Julius Maada Bio is a very fair and a truly God-fearing man. Whoever gave him that “best behaved and most disciplined” accolade in the Bo school certainly got it right and Sierra leone is lucky to have him here. For it is indeed “Manners” that “Maketh Man”. Not just in school, or in the army, but in politics and in life, generally. For a majority of the time, Sierra leone has not had much “manners” in our politics and public life. That is why we failed so much for so long. Suddenly, we are told to expect MANNERS everywhere and what a pleasant new era for all patriotic citizens.

Sierra Leoneans have to be very proud of and should fervently pray for this president who (very much unlike so many others) is never swayed by sentiments to inflict punishment as a way of political entertainment but is led by his strong undiluted love for a country that we all love and his deep abiding faith in the God that we all serve.

So help us God to recognise and embrace that which is good!

Be the first to comment on "This Verdict Should Go Viral!"