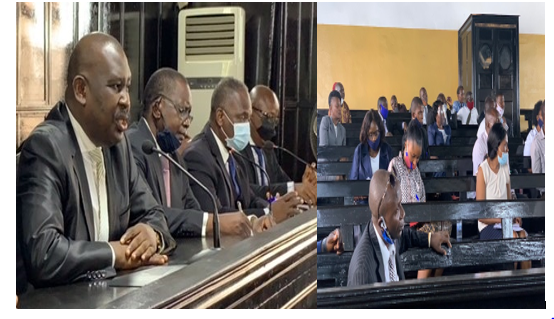 Amb. Hon. Justice Edwards was speaking at Court No. 1 of the main Law Courts building marking the official commencement of the training for Court Registrars, Baliffs, Administrative and other Support staff of the Judiciary. The training which caters for one hundred and twenty-eight (128) staff members is fully funded by the Judiciary with funds from the Government of Sierra Leone.

According to him, the training is the first to have been organised in the annals of the Judiciary. He told the trainees that the Judiciary and Legal Training Institute has identified seasoned facilitators with huge span of knowledge on all the courses ranging from the Roles of Registrars in Civil and Criminal Courts; Roles of the Bailiffs, Court Secretaries in both Civil and Criminal proceedings; treatment of vulnerable and special witnesses, Bail and Bond Regulations, Bail/Bond requirements, management of records, Judiciary as an Arm of Government: Relationship with the Bar, Law Office, Sierra Leone Police and the Legal Aid Board, facilities and assets, ethics with particular reference to the code of conduct for support staff and many more to develop their capacity.

Speaking on the adverse effect of corruption, Amb. Hon. Chief Justice Edwards said some staff members are either just too wicked or not good at their work which is why they mostly renege on their sacred duties to allow files to be missing, allow accused persons to jump bail or sometimes stalled some cases from coming up for hearing.

Amb. Justice Edwards vowed to have a new Judiciary that is transparent and accountable to the people. He inspired the trainees to invest their best as the training will also empower those who are weak by capacitating them to be resourceful and productive.

He added that after the training staff members who engage in corrupt activities under the guise of inexperience or lack of training will have no place to hide.

“You either do what is expected of you or face disciplinary action,” he warned.