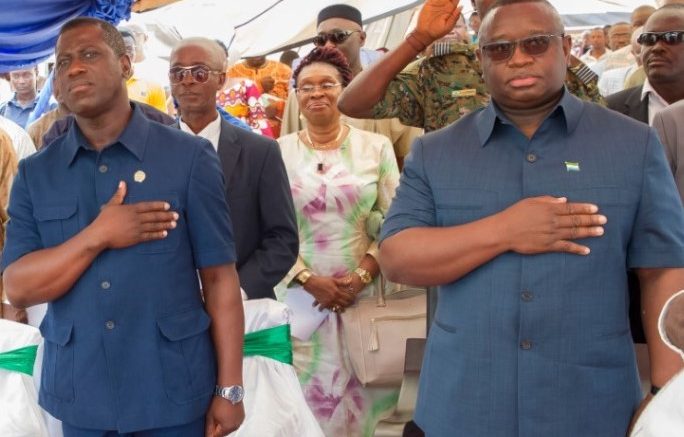 The Commonwealth Heads of Government interim report: “A New Direction of Leadership in Sierra Leone,” has featured the commendable efforts of the New Direction Government to transform the nation to a peaceful and prosperous middle-income country by investing in human capital development.

Full details below written by the Chief Minister

Mention the country Sierra Leone and it immediately conjures the usual stereotypical images of civil war, blood diamonds, and Ebola. Sierra Leone today is a very different country from this rather lazy caricature of the 1990s, just like Rwanda 26 years after genocide and Ethiopia, 29 years after civil war and famine. However, Rwanda and Ethiopia are no longer defined by their pasts. Sierra Leone today, under the leadership of President Julius Maada Bio and his New Direction Government since April 2018, is a stable, peaceful, and effectively governed country. Five successive democratic elections have successfully seen the peaceful transfer of political power from incumbent governments to opposition political parties in 2007 and 2018 – a rarity in Africa.

Sierra Leone is now ranked as the third most peaceful country in sub-Saharan Africa and is emerging as the investors’ destination of choice in the West African sub-region.

The New Direction political governance and inclusive development philosophy of President Bio are predicated on the five key pillars that embrace the Commonwealth Heads of Government Meeting (CHOGM) themes, to inspire the development trajectory of the country after 59 years of political independence, and to change and transform the poverty and underdevelopment narrative of Sierra Leone.

It is common knowledge that Sierra Leone’s abundant strategic mineral and natural resources have not supported the development of the country. Instead, it has become a typical example of the resource-curse debate, with the country ranked at 181 in the UN Development Programme Human Development Index of 2019.

It was determined that to change and transform Sierra Leone, the governance and development focus had to fundamentally shift from excessive dependence on natural resource extraction to investment in Human Capital Development (HCD) as the foundation for achieving a middle-income country status, based on inclusive development and inclusive politics.

President Bio often tells the inspiring story of attending primary school in his village bare-footed because his mother could not afford to buy him any shoes, and how he literally walked bare-footed from his village to the State House Presidency. He has identified three key pillars for the HCD flagship programme: education, health, and agriculture. Free quality education was launched in September 2018, despite the government inheriting a near-bankrupt state and with no funding for development partners.

To date, it has allocated 21 percent of its recurrent budget to the education sector and created two distinct but interrelated Ministries of Education including the Ministry of Basic and Senior Education and the Ministry of Technical and Higher Education.

The National Development Plan is entitled ‘Education for Development’, to emphasise the importance of education in the change and transformation of Sierra Leone. New investment in education has funded the building of more schools, classroom blocks and associated facilities, recruitment and training of more teachers, and increased teacher salaries. It has also enabled the launch of 170 nationwide pilot projects to improve learning outcomes for basic literacy and numeracy, operationalized ten technical and vocational institutions with curricula focused on skills training and entrepreneurship education, and approved two new universities for science and technology and technical and entrepreneurship education.

In support of the HCD health pillar, the government has increased healthcare budget allocations from seven percent in 2018 to 11 percent in 2020 and recruited and trained 2,500 healthcare workers with a focus on midwives, pharmacists and pharmacy technicians, epidemiologists, clinical and surgical community health officers.

A budget of US$19.8 million has been provided for the construction of an ultra-modern National Diagnostic and Radiotherapy Cancer Treatment Centre, and these new facilities will significantly reduce costs on overseas medical expenditure, end health tourism, and broaden healthcare access to more Sierra Leoneans. Importantly, one-third of this government funding comes from the Anti-Corruption Commission, as part of the monies recovered from its corruption prosecution.

President Bio has simplified the conceptualisation of HCD as ‘feed the mind/brain’, in other words, for education: take care of the body (health security) and feed the stomach (food security).

Nearly 70 percent of the population of Sierra Leone depends on some form of agriculture for their livelihoods. With significant potential in the agricultural sector for economic diversification, growth and massive job creation, eight percent of GDP are allocated to agricultural development transformation in a range of areas, including mechanized and commercial rice value-chain production, animal husbandry and industrial cash crop production such as cocoa, coffee, and cashew nuts.

The government currently spends US$200 million on rice and US$20 million on onion importation annually, despite the vast fertile and arable lands available within the country. To end importation of the staple food, rice, and to develop sustainable food self-sufficiency to support the education and health HCD pillars, the government is funding the Ministries of Youth

Affairs, Defence, the Correctional/Prison Services, and Local Councils to establish mechanised and commercial large scale institutional farms across the country.

Implementation of the HCD social and development intervention pillars is capital intensive, and so priority has been given to the efficient political and economic management of state and natural resources, to enable funds from the country’s abundant strategic mineral resources to be used to pay for HCD social service delivery and economic development.

With support from the World Bank, the first nationwide airborne geophysical survey has been completed, to provide high resolution magnetic and radiometric data on Sierra Leone’s mineral assets and deposits. This has confirmed the economic and financial potential of the country’s mineral assets and wealth, and will now be used as sovereign collateral to secure major funds to finance large-scale infrastructure projects, such as the transformative Lungi-Freetown

Bridge construction project at an estimated cost of US$1.2 billion.

For 59 years, Sierra Leone has been taxiing on the tarmac of the development runway, but with the implementation of HCD under new, committed leadership, Sierra Leone is set to take-off towards middle-income country status in the coming years.

If post-war Ethiopia, Rwanda and Uganda can do it, why not Sierra Leone?

This is the New Direction in Africa!