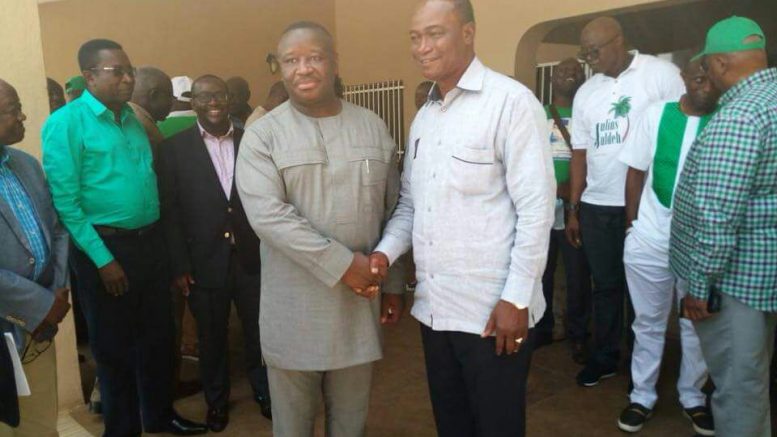 It has been a long journey with lots of potholes and breaks and slush in the way which was much worse than those on the notorious 17 mile stretch of road between Pendembu and Kailahun.

I recall with amusement the blizzard delivered to you by former Vice President Solo B when you vied for the flag bearer position of Sierra Leone Peoples Party which was in governance.

You sat through it, looking at Solomon Berewa but without uttering a word then or after that. All I remember was you turning to me after the meeting and saying, without anger in your tone, “Doctor did you hear all that?”

Mr. President this old man could go on an and on but to cut a long narrative short, YOU ARE NOW PRESIDENT OF SIERRA LEONE repeat you are now PRESIDENT JULIUS MAADA BIO OF SIERRA LEONE. The battle was rough as only the APC are capable of doing.

The next was the Sylvia Blyden factor during the contest for flag bearer and later for the Presidency as the official candidate of the opposition.

Your popularity remained very high within our party, and although you were aware of all those who continued to stab you in the back, you did not hold any grudge.

On the contrary, you repeatedly declared publicly your willingness to work with all in the interest of our party.  (Photo: Dr. Sama Banya, author)

Mr. President may also recall the occasion of the Laying out ceremony of the remains of the former President Tejan-Kabbah at the SLPP headquarters.  I urged the faithful that to maintain the legacy and policy of the late President for party unity; I declared during my tribute that there was no member at the time who was more famous or as popular as you were within the party and admonished all to rally behind you.

The outgoing government MUST BE MADE TO RESPOND TO THE AUDITOR GENERAL’S NUMEROUS QUERIES as well as how they have acquired all their wealth.

Some of your detractors led by Andrew Kelly could no longer contain their anger and burst out in a scathing attack on me. His newspaper to which I was a columnist joined in the attack.  Mercifully the vast majority of our membership came to my defense.

Usu Boise Kamara, your primary opponent in the 2011 contest, left our party and joined the ruling APC where he and others were received with great fanfare.

The 2017 flag bearer contest came and the same group of disaffected members who had not backed you since 2011 and led by the likes of Ambassador Foday Dabo, Brima Keita, Dr. Alusine Fofana, Madam Isata Jabbie, the widow of late former President Tejan-Kabbah and their supporters, left our party.  The started the nucleus of the KKY movement which later formed an alliance with itself and called it the National Grand Alliance NGC.

They lulled poor Dr. Kandeh Yumkella that they were a favorite group with a large following and the poor chap fell for their self-deception.

The result of the February 27 ballot tells the whole story.

There was a further rearguard action from John Benjamin who had carried a grudge since 1996.  Eddie Momoh, the editor of the Metro newspaper which was very close to John Benjamin, continued with a series of false attacks on you during which repeated a falsehood that you had attempted two previous assaults for the Presidency and challenged your attempt to go for the third time.

Mr. President this old man could go on an and on but to cut a long narrative short, YOU ARE NOW PRESIDENT OF SIERRA LEONE repeat you are now PRESIDENT JULIUS MAADA BIO OF SIERRA LEONE. The battle was rough as only the APC are capable of doing.

In my humble opinion you inherited a sick, divided, and economically deprived country, thanks to 10 years of APC’s divisive governance, naked tribalism and regionalism, aided by massive corruption on a scale not hitherto experienced.

Your immediate task is a healing process.  Next, stop that crazy Mama Airport project with immediate effect!

The outgoing government MUST BE MADE TO RESPOND TO THE AUDITOR GENERAL’S NUMEROUS QUERIES as well as how they have acquired all their wealth.

Have absolutely no confidence in the activities of the Anti-Corruption Commission as it continues to run after head teachers and court clerks while turning a blind eye to what has stared them in the face for ten years.

I do not intend to resume this column, but with one more entry, I will continue my retirement activities.