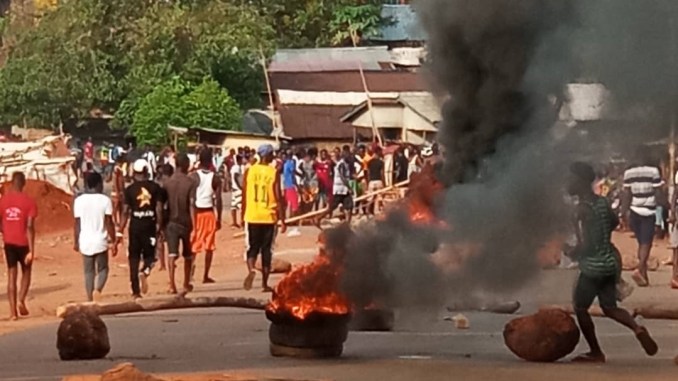 1. Today, I want to call on all Sierra Leoneans to celebrate the ties that bind us as a nation and not the angers that blind us. We convened a national convention that agreed to institute a permanent commission for peace and national cohesion that would identify and address all triggers of conflict in our nation. Over and over again, I have asked every Sierra Leonean to contribute to building inclusive and resilient national institutions, to consolidate our democracy, and to build a peaceful Sierra Leone.

2. The Sierra Leone Association of Journalists has acknowledged that they practise journalism freely and we are working with them to repeal obnoxious laws and further enhance professional development in journalism. Civil society organisations speak up freely and hold Government accountable and we are grateful that they are playing their part as citizens. Organised labour organisations, professional organisations, religious bodies, Paramount Chiefs, community stakeholders, the private sector all continue to contribute positively to our peaceful co-existence as a nation. The international community in Sierra Leone continues to engage with Government and Sierra Leoneans in general in fostering peace and supporting development.

3. In this Holy Month of Ramadan, Sierra Leoneans, irrespective of ethnicity and political party, buy and sell in the same markets, live peacefully in the same communities, and break fast and worship Allah Subuhanah wa T’Allah together and in peace.

4. Presently, Sierra Leone is contending with COVID-19 that has already killed over two hundred thousand people worldwide including Sierra Leoneans at home and abroad. We will remember them and their families. We will also continue praying for our compatriots and their families who are currently battling with this highly infectious and deadly disease. I thank and urge all my fellow Sierra Leoneans to continue complying with all hygiene and public health directives as we work hand-in-hand to rid this country of the Corona Virus.

5. I also call for solidarity and cooperation from all wellmeaning Sierra Leoneans across this great nation to join us in informing and mobilising our communities to prevent, curtail, and protect against COVID-19.

6. It is at times like this, in our country’s greatest hour of need, that we should all voluntarily stand up for our shared values, our common destiny, and the only place we call home. When Ebola ravaged our nation, I did not wait for an invitation or a telephone call to lead my party’s social mobilisation and fight against Ebola. I travelled to every part of this country that was accessible to me and delivered a message that was in consonance with the government’s strategy and objectives in fighting Ebola. That is what serving the national interest is -not waiting to be begged pleasantly to serve your country and putting your country’s interests always above all else.

7. As President, I have reached out to all Sierra Leoneans to work together to make this country a peaceful place for all of us. I dispatched the Honourable Vice President to former President Ernest Bai Koroma to initiate dialogue on fostering peace and resolving the acrimony of division. I followed that with a personal invitation of the entire leadership of the All People’s Congress party to State House, (including former President Dr. Ernest Bai Koroma), to discuss the way forward for a peaceful and united Sierra Leone.

8. In the post-meeting memorandum of understanding, we resolved on working urgently on building a united and cohesive Sierra Leone free of patronage, threats, hate, virulent partisanship, and corruption.

9. But within those two years, there has been an unrelenting barrage of attacks against the state, state officials, public and private persons and properties. This hearkens back to  a public threat issued by the losing Presidential candidate that the All Peoples Congress party would make the country ungovernable.

10. One would therefore expect that the leadership of the All People’s Congress, like the leaderships of the other political parties in Sierra Leone, would have publicly and staunchly condemned as well as dissociated the party from any persons or groups of persons who incite hate, associate with and support violence, or participate in violence against the state. They have not. Instead, the leadership has made public statements that have heightened tensions.

11. Evidence emerging from investigations have named known local leaders and members of the APC as being responsible for inciting, planning, financing, mobilising, and in some cases actively participating in violent terrorist attacks against the people of this country.

12. The silence of the national APC leadership on the active participation of their members and executive members in these acts of terrorist violence, senseless loss of lives, injuries and wanton destruction of public and personal property is truly disconcerting.

13. And let us be very clear, fellow citizens. The actions of these persons are not peaceful political expressions as one expects in a democracy. Their actions are carefully planned, coordinated, well-orchestrated and executed acts of violent terrorism targeting the state, state officials, public buildings, and private persons and property. Like terrorists elsewhere, they even record their acts with telephone cameras, run self-valorising commentaries on their acts of extreme violence and killings, and share those synchronously in WhatsApp forums.

14. For each of the attacks at Lunsar, Foredugu, Tombo, and the prison breakout at Pademba Road Correctional Centres, known agents and associates of the All People’s Congress party have publicly predicted the precise date, target, and nature of the attacks. There is an obvious pattern. These attacks are therefore premeditated, orchestrated, and executed with a clear objective – to make the state ungovernable.

15. Persons who have been arrested are not being held because of their political beliefs or their professional work as journalists. Beating a journalist to death, persistently inciting people to violence against the state, the unauthorised carrying of loaded firearms, burning down the homes and vehicles of Chiefs, burning down hospitals and community health centres, burning down police stations, destroying telecommunications  installations, burning down large parts of prisons, violently killing persons with machetes and iron bars, are all criminal offences. What each and all of them have done are not peaceful political expressions. They are either being held on criminal charges or being investigated for criminal violence and terrorism-related offences.

17. The right to free speech is guaranteed in our democracy and in our constitution. But no democracy guarantees a right to speech that incites criminal violence, foments hate and divisiveness, causes public disorder, and threatens the security and stability of the state.

18. I am certain that our international partners agree with us that prosperity and development are possible only when there is peace and stability. Countries that have prospered have always ensured first that peace and security are maintained. Our international partners, as moral guarantors of our peace, should therefore single out and wholeheartedly condemn persons and organisations associated with these acts of extreme violence against the state.

19. In peaceful democracies, citizens strive for the common good, peacefully cohabit with other citizens, and advocate for and protect their rights through peaceful norms and practices.

20. Our enforcement agencies and the justice sector will ensure that every citizen’s right to due process is respected and justice is dispensed speedily and without hindrance, fear, or favour.

21. The rule of law is supreme. No citizen, absolutely no citizen, is above the law.

22. My Government has been closely following events of the last few weeks. The security sector has closely analysed the prime movers, financiers, causes, nature, and patterns of violent acts. Our responses are therefore well informed.

23. As Commander-in-Chief, I have ordered the intelligence and security forces to use all available resources, and take all measures necessary within the laws of this country to deal promptly, decisively, and robustly with all acts of violence against the state.

24. Anybody who incites, plans, supports, undertakes, or is involved in any manner of violence in this country will  be dealt with harshly. We will use all instruments of state power and resources permissible under the laws of this country to deal firmly and decisively with these violent terrorist attacks against the state of Sierra Leone.

25. I have also ordered urgent reforms within the security sector. The objective is to make their leadership more decisive, more effective in crime prevention and deterrence, and to maintain peace and stability in the face of extreme acts of terrorist violence against the state.

26. I have called for more citizen engagement so that communities are more intimately involved in preventing crime and the causes of crime. I want to personally encourage civil society organisations to expand their scope of work to capture these dynamics in their daily work with communities.

27. I have also ordered urgent reforms within the correctional system to provide for safe and secure custody in line with international best practices while developing a reintegration component focused on skills training and entrepreneurship.

28. I am aware that the courts are closed because of COVID-19. But given the prevailing circumstances, I will appeal to the Chief Justice to consider appropriate measures to adjudicate the cases that emerge from this widespread insecurity.

29. Equally, given the destruction to the Pademba road Correctional Centre and the burning down of police stations in parts of the Country in addition to overcrowding in the Correctional Centres and police cells, there is a need to think about decentralizing court hearings.

30. In conclusion, let me re-state that any act of violence will be dealt with within the broad spectrum of the law.  Citizens have an obligation to obey law and order. Those who think that by fomenting trouble and inciting violence in this country, they can derail and distract the government from fighting corruption, attracting investors, and meeting its promise to deliver development of this nation, know now that you will lose this fight.

I thank you and God Bless Sierra Leone.