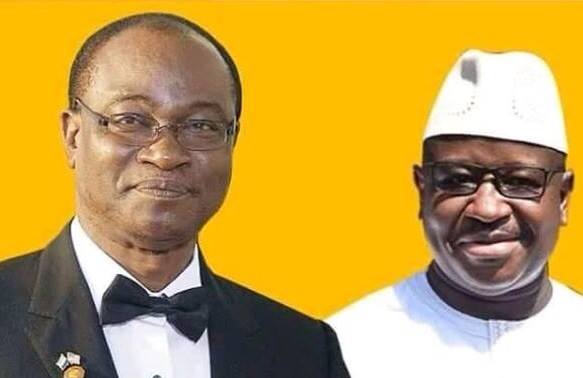 The next President of Sierra Leone is going to be one of these Statesmen, Dr. Wilson Samura-Karmara and Brig Gen ( Rtd) Julius Maada Bio.

Coincidently both are Catholics, both are not known for violent, both attended high schools in Bo City, Southern Sierra Leone. Wilson went to UCC and Maada attended The Bo School.

I think both Statesmen are still friends, perhaps that was demonstrated last when the International Observers for our elections invited the two political leaders on Palm Sunday. Maada put the ” Palm Cross” in Wilson’s chest pocket, and Wilson asked Maada to lead and move together.

Sometimes the problem is with some of the supporters.

Apart from few isolated issues, I believe the 31 March 2018 Presidential Run Off was relatively peaceful. And I think the Nation’s Security Sectors did play some responsible professional roles as compared to other elections before this. I will urge our national security personnel, especially the Republic of Sierra Leone Armed Forces ( RSLAF) and Sierra Leone Police ( SLP) to remain Apolitical and limit themselves to their specified constitutional roles in the best national interest of our beloved country – Sierra Leone.

There was, however, a reported attack on the Main opposition presidential candidate, Brig(Rtd) JM Bio last night by armed men allegedly believed to be part of bodyguards to the Minister of Trade and Industry, Momodu Allieu Pat-Sowe who lives few meters away from Brig (Rtd) Bio’s residence at Juba Hills.

Perhaps what I will strongly recommend is the immediate withdrawal of all military personnel from cabinet ministers and other State functionaries.

I think the SLP should be able to provide guards for all other cabinet ministers and State functionaries that may really require security guards.

Perhaps we should also be thinking of providing very responsible armed security to all those leaders who win their National delegate conventions to become the leaders of the PPRC certified and registered political parties for a general election till the election is conducted. ONS Chief please take note of that for the 2023 General Elections.

My Sierra Leonean brothers and sisters, lets patiently wait on Chief Electoral Commissioner IA Conteh and his team to announce the winner of the 31 March , 2018 Presidential Run Off , and our outgoing President Ernest Bai Koroma makes a peaceful transfer of the political power from him to the NEC declared winner on same day according to the dictates of the 1991 Constitution of Sierra Leone.

Wish all my friends happy and blessed Easter Sunday.