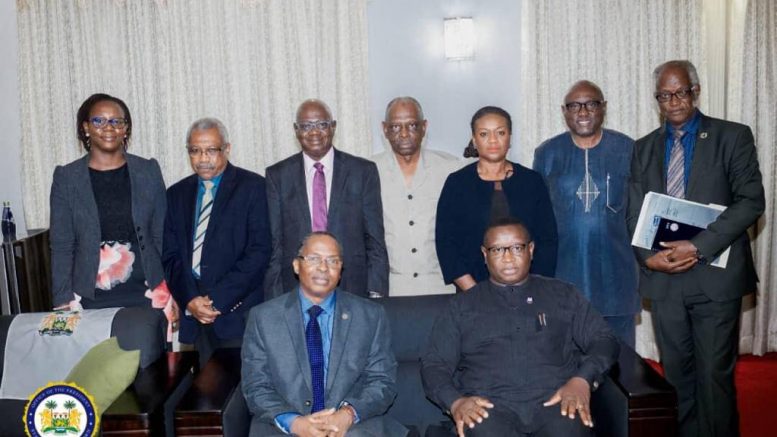 State House, Freetown, Thursday 31 January 2019 – The Sierra Leone Institution of Engineers, SLIE, and the Professional Engineers Registration Council, PERC, have met with His Excellency President Julius Maada Bio at State House to update him on their activities.

Professor Jonas Redmond-Sawyer of SLIE said the institution was a body aimed at fostering the practice of engineering in Sierra Leone, saying that they were delighted about the President’s pronouncement, during his State Opening address in Parliament, to partner with professional bodies like SLIE in addressing issues of development in the country.

He mentioned that that was a brilliant step because it would create a forum for dialogue and interaction between the government and professional bodies, which in turn would create a more efficient pathway to development in the country under the New Direction.

President of PERC, Engineer Tani Pratt, said they were a body empowered by an Act of Parliament of 1990 to regulate and control the practice of engineering in the country. He said they were beginning to fulfill some of their wider regulatory mandates, adding that they had started providing certification services to the Mining Industry by introducing a scheme for Mine Manager’s certificate of competency for surface.

He noted that despite the successes, PERC was concerned that its 1990 Act was unable to adequately provide them with the mandate to address all of today’s challenges, disclosing that they had started discussions with the Ministry of Works on ways to strengthen PERC and the engineering profession for greater impact on the ground as well as to facilitate the body’s increased involvement in national development.

“Failure to implement the improved regulations is one of the greater risks to the safety of our citizens as multi-storey buildings continue to be built without adequate regulations. These are incidents waiting to happen as have been demonstrated in similar situations in Sierra Leone and the subregion,” he said.

On his part, President Bio thanked the two bodies for updating him on their various activities, saying that that had given him an insight on the ways they could help in developing the nation. He said different nations chose different pathways to development but noted that whatever ways a nation chose, engineers would form an important component. He added that the experiences already gained by members of the two bodies would be vital for the development of the country.

President Bio also said that he had always grumbled about engineers when considering the level of experienced engineers in the country as opposed to the kinds of poorly constructed buildings around, especially in the capital city, which was becoming a perennial problem.

On the proposed new Act, he said: “The Act itself must be made current and as soon as you present us with the reviewed Act, we will quickly move it through the natural stages of governance and get it back to you so that you have a new document that will empower you and also bring you to date.”