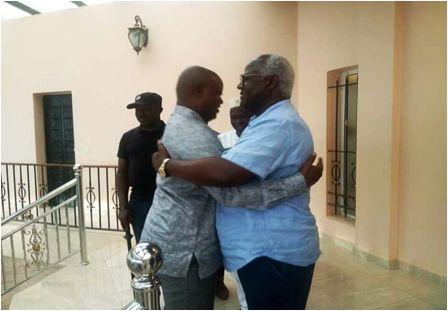 Why did Ernest Koroma unconstitutionally expel Vice President Sam Sumana, in 2015? Ernest Koroma and Osman Yansaneh plotted Sam Sumana’s expulsion because they decided to tribalistically eliminate a Kono Vice President and create a presidential path for a northerner, Samura Kamara. A shameless clown without self-respect, Sam Sumana stunned the whole nation when he traveled to Makeni in 2019, knelt down before Ernest Koroma like a brainless slave, and pledged loyalty to the same man who DISGRACED him in public.

Languishing in opposition, Ernest Koroma and Osman Yansaneh have opened the gates they once closed. Stunningly, the clownish Sam Sumana has HAPPILY returned to his ABUSERS within the APC party. Sam Sumana’s desperation is partly fueled by the sad truism which asserts, at least for now, that no one can march to the Sierra Leonean presidency without belonging to either APC or SLPP. However, Sam Sumana’s humiliation in 2015 was so intentional that the man should have thought twice before returning to an APC party buckling under Ernest Koroma and Osman Yansaneh.

Sam Sumana has NO RESPECT for himself. I would not be surprised if Ernest Koroma and Osman Yansaneh try to permanently eliminate the idiot by either poisoning him or via another Mephistophelian plot. As long as veteran crooks like Ernest Koroma and Osman Yansaneh continue to prevail as political gladiators, APC cannot be trusted. Sadly, Sam Sumana is too dangerously shameless to see an unmissable truth.

As long as veteran crooks like Ernest Koroma and Osman Yansaneh continue to prevail as political gladiators, APC cannot be trusted. Sadly, Sam Sumana is too dangerously shameless to see an unmissable truth.