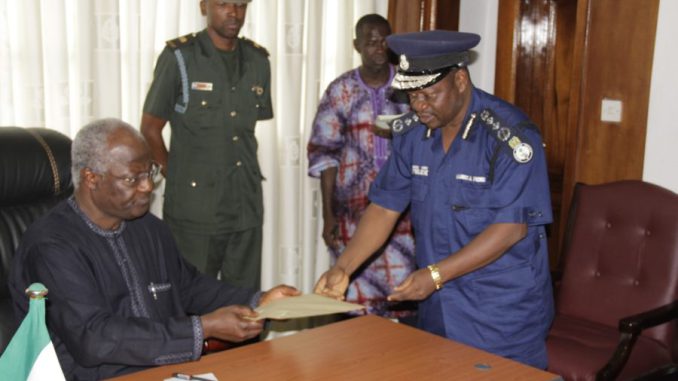 GOVERNMENT’S WHITE PAPER ON THE SHEARS-MOSES COMMISSION OF INQUIRY INTO INCIDENTS OF POLITICAL VIOLENCE AND INTOLERANCE OCCURRING IN GENDEMA, FREETOWN AND KENEMA

1. The Shears-Moses Commission of Inquiry into incidence of political violence and intolerance occurring in Gendema, Freetown and Kenema was established by His Excellency Dr. Ernest Bai Koroma, President, by Constitutional Instrument No. 8 of 2009.

(i)  incidents of political violence and intolerance that occurred during the month of March, 2009 in Gendema(Pujehun District), Freetown(Western Area) and Kenema (Kenema District);

(ii)  the roles and responsibilities of political parties, law enforcement agencies or other persons or groups in relation to the incidents of political violence and intolerance referred to in (i) above;

(b)   to make necessary findings or conclusions that shall provide a full understanding of the circumstances that resulted in the incidents referred to in (a) above, and

(c)   to recommend measures to be taken and mechanisms to be put in place to effectively prevent the occurrence of such incidents in the future.

4.  The commission after its investigations observed that the root cause of the unrest and violence in the areas investigated has been the spate of political intolerance which if not nipped in the bud can have the tendency to recur.

5. As a consequence of the observation made in paragraph (4), the Government accepts the following recommendations of the Commission:-

(a)   that to eradicate political intolerance there must be-

(i)    effective education in primary, secondary and tertiary education  institutions;

(ii)  workshops and seminars to be conducted for the security forces, consisting of the Army, Police, Prisons and Fire Force to enable them perform their functions fully, effectively and most importantly, impartially;

(b)  that Parliamentarians, both from the majority and minority sides, should through concerted and peaceful means pursue their political objectives and be role models for their constituencies. They should also display respect for all shades of opinions and organize campaigns in their constituencies with strict adherence to electoral codes of conduct;

(c) that traditional rulers who constitute the nearest arm of government to the vast majority of people and have the ability to put them under restraint should be accorded due respect and be divorced from any form of political influence whilst encouraging them to guide their subjects to be peaceful and law-abiding;

(d) that in view of paragraph (c) partnership between the traditional rulers and the Political Parties Registration Commission should be encouraged;

(e) that civil society groups which have influence over a sizable percentage of the populace be encouraged to lead in the efforts at eradication of political intolerance and violence. They are also to be encouraged to work with local communities and authorities to prevent the making of malicious statements;

(f)   that Government recognizes that both the print and electronic media are vital if political intolerance and violence are to be eradicated, since they have the ability to reach all corners of the country. Government will therefore encourage them to give the necessary information in the public interest without being biased or partisan;

(g)   that the media must be objective in their reports and comments and avoid inflammatory comments or statements which may have the tendency to inflame passions and promote political intolerance and hatred;

(h)   that the Independent Media Commission should have improved monitoring machinery of the media and ensure strict observance of the code of conduct.

6.   The Government further accepts the following other recommendations of the Commission:-

(i)  that the Political Parties Registration Act be amended to empower the Political Parties Registration Commission to penalize parties involved in political violence and other related political offences. This amendment should also empower the Commission to require every political party to organize seminars or workshops on the eradication of political violence in every constituency failing which a party should not be allowed to field candidates in any constituency where such requirement has not been fulfilled.

(j)  that Government re-affirms its absolute abhorrence of violence, political or otherwise, and restates its implacable opposition to the use of the youths of Sierra Leone in that venture. Progress has been made in that regard, through the implementation of the National Youth Policy by the Youth Commission. Government further accepts that there is the need to get the youths to be more gainfully engaged.

7.  Government notes the recommendation that steps be taken against persons allegedly responsible for acts of violence in Freetown and Gendema to be relieved of their responsibilities and banned from holding public office for a period of at least five years.  Government, however, regrets its inability to legally effect that recommendation as the banning of citizens from holding public office (other than by law) recommended by the Commission is not provided for in the laws of Sierra Leone accordingly;

(a)   In the case of the Mayor of Freetown, Herbert George Williams, he was duly elected by popular vote for a term of four years. This mandate cannot therefore be overturned by the government through administrative action;

(b)   Government notes the findings and recommendations of the Commission relating to the erstwhile Resident Minister, South, Musa Tarawallie, and assures the public that appropriate action will be taken in due course in that regard.

8.      Government further notes the recommendation of the Commission in respect of Mr. Mohamed Turay (alias Yete Yete) and Idrissa Kamara (alias -Leatherboot) and considering their respective ranks in the police force, will refer the matter to the Police Council in respect of the former and to the Inspector-General of Police in the case of the latter.

Government is of the view that the violence under reference was perpetrated not only by members or sympathizers of political parties but also ordinary persons who may not have belonged to any political party. To combat or forestall this, Government is actively considering the enactment of the Political Violence Act which will provide for punishment and the banning of convicted individuals from holding public office for a number of years.

9.      Government accepts the recommendation of the Commission that members of the security forces who betray public trust to protect citizens and are found to have acted unprofessionally should be disciplined to serve as a deterrent to others. Government also wishes to state that in addition to the Police Council created by the Constitution, which is empowered to discipline serving police officers, it is in the process of creating an Independent Police Complaints Committee that will be staffed by persons and organizations of integrity and good standing. The proposed body will add an extra layer of disciplinary processes of serving police officers and will enhance public confidence in the Police.

10.  Regarding the recommendation for the restructuring of the Police, Government wishes to state that a restructuring exercise of the police was carried out a few years ago, and that the current challenges confronting the police are being addressed by the Police Council.

11.  Government intends to set up a Victims Board to alleviate the pain and suffering of victims of serious offences such as attempted murder, sexual assault, etc. It is therefore, in the light of this, not appropriate to establish a board only for the single offence of “political assault”.

12.  Government reiterates its firm and total commitment to a democratic Sierra Leone in which the rule of law, good order and fairness are the hallmark. In consequence, Government notes and applauds the observations of the Commission that “in any liberal democracy there must be a determined willingness to accord basic rights and liberties to all persons everywhere. There is always a variety of ideas and beliefs in such a situation which run contrary to various segments of the population. If majority rule does not safeguard the free and divergent expression of the opinions of the minority, there is a risk of tyranny. Political tolerance at its height ensures protection of the rights of individuals with whom we strongly disagree, and dislike their view”.

13.  Government would like to highlight the fact that the above principle is of general application. It also presupposes that the minority is equally committed to respecting the democratic rights of the majority, in particular, the right to government and carry out its constitutional mandate. The minority must abide by this democratic tenet as well as respect and enhance the integrity of our national institutions and not seek to disrupt the good order of society and in so doing impose a “tyranny of the minority” on the general populace. It is only through the adoption of this patriotic and national consciousness that our nascent democracy can be developed and strengthened.

14.  Government wishes to register its thanks and appreciation to members of the Commission and its support staff and all those who in various ways contributed to the achievement of its task.

Attorney-General and Minister of Justice

Story originally published in the sierraexpressmedia.com in 2012 and republished with credits