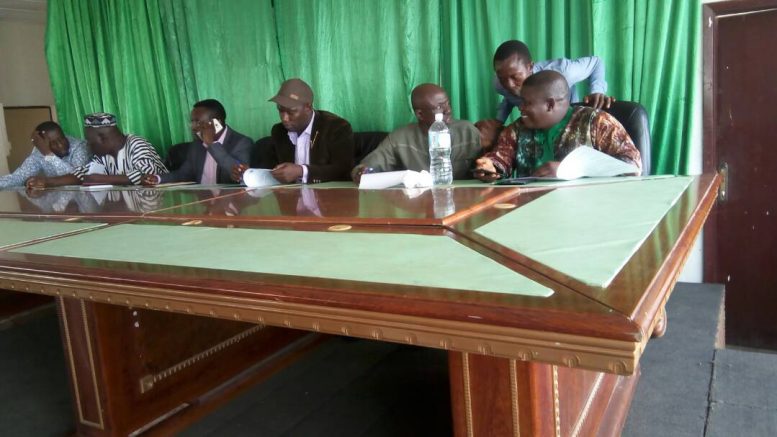 [NEC] Unanimously resolved to devolve its powers of consultation to the Flag Bearer and Presidential Candidate to appoint his Running Mate for the March 7, 2018, Elections.

We the Members of the National Executive Council of the Sierra Leone Peoples Party (SLPP), representing the entire membership of the Party, here assembled at the Conference Room of the Party Headquarters 15th Wallace Johnson Street Freetown in the Western Area of the Republic of Sierra Leone on Tuesday 2nd Day of January 2018. 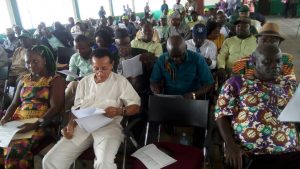 RECALLING the provisions of Clauses 6(A) and (C) of the Constitution of the SLPP 1995 (As Amended) and Clause 5 (D) of the Rules and Regulations for the Election of the SLPP Presidential Candidate dated the 7th March 2017.

RECALLING AND REAFFIRMING our commitment to comply with the relevant provisions of the Constitution of Sierra Leone 1991 (Act No. 6 of 1991), in particular, the provisions of subsection (2) of Section 35 thereof, requiring all political parties to ensure, among other things, that their internal organisation conforms with democratic principles;

HAVING BEEN DULY REQUESTED BY THE NATIONAL ELECTORAL COMMISSION TO SUBMIT THE LIST OF ALL ENDORSED CANDIDATES FOR PARLIAMENTARY ELECTIONS ON THE 10TH DAY OF January 2018:

DESIROUS OF COMPLYING with the laws of Sierra Leone as stated in the relevant provisions of the said National Legislations and the party constitution stated above;

AND ANXIOUS to strategize and prepare our party for winning the 2018 Presidential, Parliamentary and Local Council Elections on the 7th March 2018;

Having thoroughly discussed all issues and listened to all members of NEC.

IT IS HEREBY RESOLVED AS FOLLOWS: 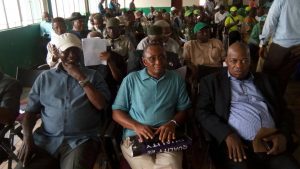 That all intending aspirants for the position of Member of Parliament Shall be fully paid up members of the Sierra Leone People’s Party.

The National Secretariat ensures that all vacant executive positions within the party structure be filled with immediate effect.

Unanimously resolved to devolve its powers of consultation to the Flag Bearer and Presidential Candidate to appoint his Running Mate for the March 7, 2018, Elections.

Our members were admonished to be law abiding and abstain from all forms of violence and be tolerant as we go into the elections of March 7, 2018.

Passed by the National Executive Council (NEC) meeting at the FREETOWN this 2nd day of January 2018.