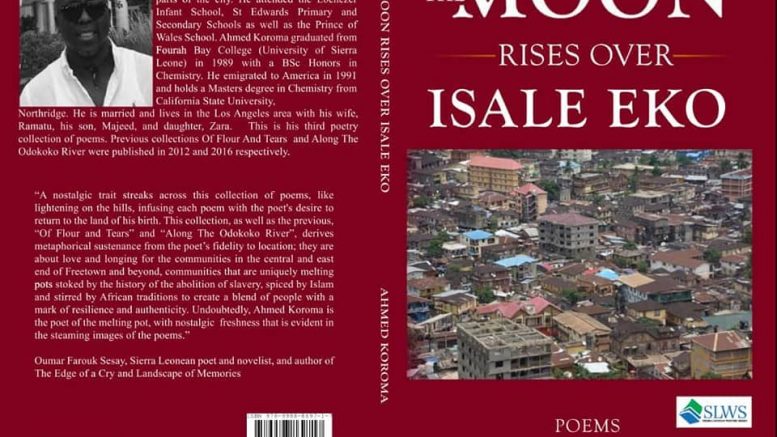 The Moon Rises Over Isale Eko

The Moon Rises Over Isale Eko

Ahmed Koroma begins his third poetry collection with a quotation from the legendary accordionist Salia Koroma (no relations): “I was present when lightning rent the sky at Ngeblama.” It is a startling image, but it is not at odds with the general tone of nostalgia (or ‘saudade’) of the poems, thirty five in all. In the first and longest (661 words), “Dear Freetown,” Koroma’s mood of longing and melancholy, of a refusal to romanticise something about which he is so affectionate, is made clear. He is writing from a distance about a Freetown he left while still a young man, a Freetown that has changed radically, but a Freetown he insists must be shown in all its grits, its glories and its terrors. In his long absence, Freetown had suffered armed invasions, massive demographic changes, population explosion, had lost its once fabled placidity. Koroma does not yearn after that bucolic charm, doubting indeed whether there ever was one – “the pretense of a blissful town”, he says. He yearns after an ‘authentic’ Freetown, “the battle scars down your tired face/reminding me of your stunning past.”

When he returns to that city:

I want to be greeted by gentle fumes
the smell of hot pepper soup on concrete
mixed with odor of decayed compost
sewage rats and roaming pigs
I love you for who you are
and for who you once were.

It is part of his great merit as a poet that Koroma commands many tones of voice. In his earlier paeans to the city he grew up in and loves – in the poems of Along the Odokoko River (2016) – the tone is lyrical, sometimes priapic, and finally elegiac. It was the voice of the child within the poet, the boy at home in his Isten Freetown. In this new collection, Koroma’s musings are sombre and melancholic, but he still manages to convey a longing, nostalgic mood. The musings seem very much like those of a middle-aged man finally deciding to return to that home after decades away. This accounts for the inchoate anxiety that suffuses these poems. When he returns, the poet says: “I do not want to be welcomed/with buntings, flags on crisscross wires/on steel poles and wooden fences.” Rather

Place my picture next to the woman
who spits at passersby
in broad daylight
let her scream my name out loud
as my vehicle gallops through a heap
of dirty rags.

Is the poet laying it on too thick? Earlier poets of Freetown – Gladys Casely-Hayford, particularly – tended to idealise the city they so loved and missed, from a distance. Koroma takes a different approach, embracing everything, warts and all, and loving the stew. His are not the typical “nostalgia poetry”: Koroma does not romanticise or idealise. Instead, he expresses his emotions without affectation, with no effort to induce starry-eyed emotions in the reader.

With the exception of “Dear Freetown,” the poems in this collection are short to the point of terseness, the average length being around 75 words. Read together, however, they convey a powerful sense of authority and nuance: the voice is that of a mature craftsman at his peak. Koroma is unquestionably the best Sierra Leonean poet of his generation, a very thoughtful, conscientious and accomplished wordsmith.

The poems in this collection were written over a period of time, and the poetic sensibility fluctuates between longing, hope and outrage. In “Mystic Road,” about terrorised villagers fleeing amidst the depredations of the civil war of the 1990s: the “numbing toes could not keep up/with the ragtag militias/that ransack the village square.” There would be massacres, but the terror would pass. And “the sun will come out another day/and the lives lost will be celebrated again.” Here, the poet, in spite of himself, confuses optimism – vacuous, unrealistic hectoring – with hope, which, as Terry Eagleton has reminded us, guards us against despair, and must be based upon realistic possibilities. The same sort of tendency is found in the “Dance”, where “a sudden feeling of resurrection” places the poet in “a gratifying trance.” In this state, one assumes, he encounters a derelict dugout – the title of the poem is “Broken Canoe” – but is held back from rowing away by the approaching tropical storm: to escape he “will fly away on top of a mat that lay besides me.”

Hope and optimism, the magical flight of fancy, suddenly give way to three sources of ‘infuriation’ (the title for three poems at the end of the collection). The first is Mount Auroel, where Fourah Bay College sits on the Freetown Peninsula. The poet sees:

And he muses about the:

“futility of hope, of courage, betrayed Of the refusal to speak truth to power It is a denial of the ominous signs and lessons From yesterday’s war, of the litany in history
That infuriates the crap out of me.”

A similar, more virulent infuriation is brought out of the poet by the sight of Pademba Roads Prison and

“the lawlessness in the streets
The evil and utter disregard
Of dark suited men in luxury cars
And the cliques in ominous alleys
That seamlessly blend love and hate
It is the pulpit call for the gallows
By those who wrote the books
That should be thrown at them
Many times over.”

Finally he encounters the notorious slum settlement of Marbella. Out of his outrage emerges pure beauty, a fiercely exact description of the settlement, literature:

It is the downpour on dirt roads and alleys
The overflowing streams at Susan’s Bay
The coffee colored aqueous concoction
And the broken bottles and fecal mess
It is the clogged drain on the hillside
The storm that once cleansed our souls
Our possession of conjugated compost
It is the carcass of salmonella laden fowls
A desperate feast for the forsaken folk
The negligence, the apathy and greed
Of those who plant seeds that refuse to grow
And insist we wait for many moons to show
It is the deliberateness of their inaction
That infuriates the crap out of me.

In Koroma’s company, poetry becomes both a source of real pleasure, and a prick on the conscience. He lets you see, and he nudges you to act. For that, he will be read for long.