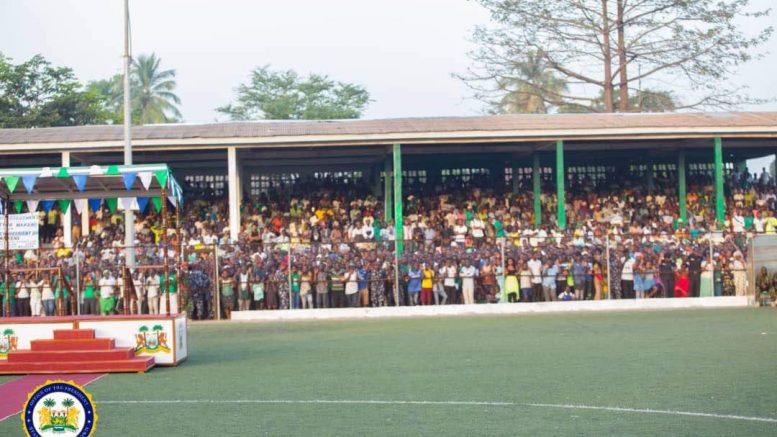 As part of his “Thank You Tour” nationwide, November 23rd, 2018 marks the day president Bio entered the city of makeni to say thank you to those who voted for him and those who did not. We can acknowledge that the welcome he received from the people of makeni is one of the best if not the best in contemporary presidential receptions we have covered. Graced by thousands of residents of makeni, the program was well organized with speaker after speaker either thanking the president for what he has achieved within a short period or pleading with the president to add on the good things he has in store for makeni, the north and the country as a whole.

Irrespective of their political beliefs, thousands came out to welcome Mr bio as the president of Sierra Leone and tell him thanks. The climax of the program was a touching speech given by a little girl thanking the president for the free education and how it will help to ensure personal and national development and also the presentation of a set of ambulances for distribution across the country based on a quota system. The ambulances were recalled, fixed and programmed with effective emergency response systems.
Thousands of people filled the Wusum Stadium to see the president. Others could not get in. In his maiden speech to the people of makeni and the north, President Bio emphasized three things:

The composition, style, and substance of the president’s speech had many in makeni have a rethink about embracing president Bio and his policies because according to them “it is all now about personal development “

This scenario has sent panic in the camp of the opposition APC because they were not expecting this. Before the president’s visit, many APC operatives were on social media making incendiary statements urging the people of makeni to either ignore president Bio or stage a massive demonstration against him. But their inciting comments fell on deaf ears as thousands of people lined the streets from the outskirts of the town all the way to the Wusum Stadium. Many APC commentators are so mute because these are early signs of 2023.
Here is advice to the APC that you cannot continue inciting one set of people against the others. The people want to see pragmatic policies and not rhetoric. The people of Makeni, especially the young generation now have an understanding of governance issues, and they can tell if a system is designed in the interest of the people.

They know Bio is making the effort for the people.
And this Makeni scenario is an early sign that 2023 is a lost cause for APC