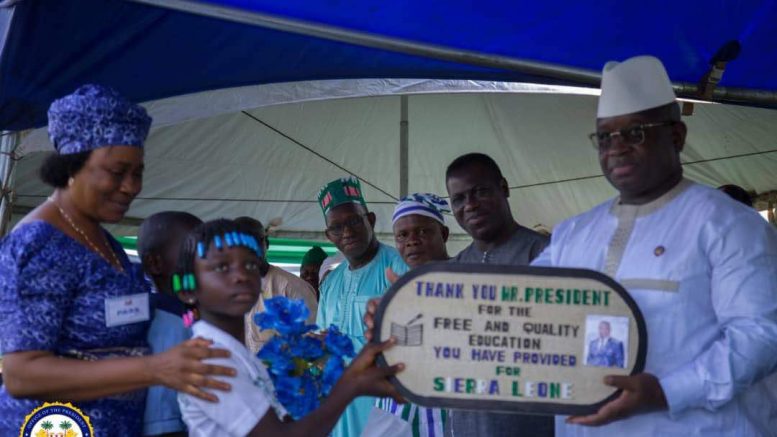 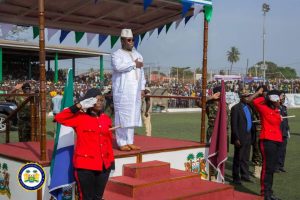 Makeni City, Northern Province, Friday 23 November 2017. His Excellency President Julius Maada Bio has concluded his thank-you tour of Makeni, northern Sierra Leone, where he pledged his government’s commitment to national unity and cohesion and called on parents and teachers to support the free quality education program.

President Bio told the mammoth crowds, who had thronged the streets of Makeni City and converged on the Wusum Field, that after the elections of March 2018 and his assumption of office in April, his government has been busy with inclusive development projects that are devoid of political or tribal considerations. He added that his responsibility as President of the Republic of Sierra Leone was to take tangible and sustainable developments across the country.

The President also used the occasion to condemn all forms of political violence across the country, emphasizing that the elections were over and citizens had made their decisions in electing him, President. While he urged the jubilant crowds not be seen to be accepting or promoting hate and division, he called for everyone to embrace one other for the good of all.

“Today, I am President for all Sierra Leoneans and not one tribe or region. We must stop all forms of tribal and divisive messages to allow the development process to succeed. Elections are now over, so the focus should now be turned to development. My government will continue its efforts to change and transform every district in this country and will ensure that development reaches every corner,” he assured.

President Bio also mentioned the introduction of the free quality education, his government’s flagship project, as a testament to his determination to improve on the country’s human capital. He reminded them that education was good for both personal and national development. He added that he had made the conscious effort to choose education as his mega project because it was the bedrock of development. Noting that human beings were the most valuable assets of any country. He, therefore, called on parents and teachers to support the education project to succeed throughout the country.

Fatmata Bah, a senior secondary school pupil who spoke on behalf of her colleagues, said that they were particularly happy with the president’s tremendous strives to transform the country. She also commended the new administration for providing free quality education, which she said had reduced the burden on their parents. She expressed appreciation to President Bio for improving the welfare of teachers across the country and for following through his campaign promise with action.

Deputy Mayor of the Makeni City Council, Santigie Mansaray, said the visit of President Bio to Makeni “demonstrated his commitment to opening up the democratic spaces, promoting democratic dialogues and creating a more just and equal society”. He added: “I will particularly thank your Government and for the positive steps you have taken to address issues of financial management, cleaning communities and the free and quality education”. He closed by pledging his council’s commitment to pushing forward all development programmes in Makeni.

Minister of Primary and Secondary Education, Lawyer Alpha Osman Timbo, who spoke on behalf of the appointees from Bombali District, said they were delighted to have been given the opportunity to serve their country under the New Direction. He said as an inclusive government, the Sierra Leone People’s Party government would continue to bring more development projects to every region across the country. He noted that President Bio was here to stay and to deliver on his campaign promises.