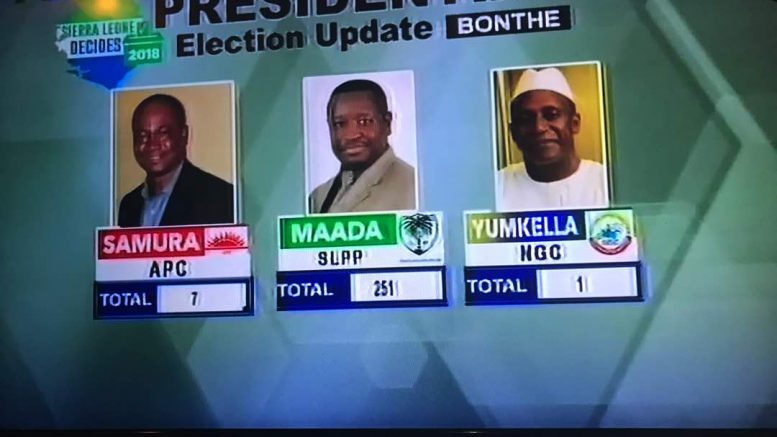 It Is Mathematically Impossible For APC To Win This Election.  Although these facts are manifest, some ruling All Peoples Party (APC) bid guns are hell-bent on subverting the will of over 60% of the people of Sierra Leone, who have already voted against the incumbent party.

In the run-up to the March 7th election, the All Peoples Congress (APC) spin masters circulated an internal memo in which they predicted that they might win the elections by 52.7%, although they conceded that there might be a runoff. 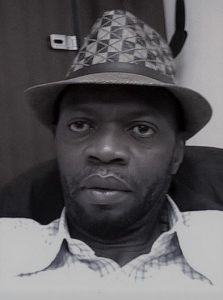 They based their predictions on an assumption that they will win 60% of the votes in Western Urban, 80% in Western Rural, 70% in Portloko district, 60% in Kambia, 80% each in Bombali, Tonkolili, Falaba and Kerene districts, 70% in Koinadugu district, 40% in Kono district and anywhere between 25% and 35% in Bo, Pujehun, Kailahun, Kenema, Moyamba and Bonthe districts as a whole.

But as they say in English, if only wishes were horses – but they are not! And as election night wore on, it became evident that the ruling APC’s share of the votes in Western Urban has decreased from around 70% in 2012 to about 46% in the 2018 elections (far less than their 2018 predictions); while the main opposition Sierra Leone Peoples Party (SLPP) increased its share from 25% in 2012 to 40% in 2018.

As a demonstration of this increase, the SLPP is also believed to have won at least 3 Parliamentary seats in the Western Urban.

The prediction by the same pundits that they will score 80% of the votes in the Western Rural did not quite pan out. Instead, they would only come up with 52% of the votes, while the SLPP increased its total to 38% of the votes while winning at least one Parliamentary seat in the district.

Incontrovertible evidence in the possession of this writer indicates that the ruling APC could only muster 53% of the votes in the Port Loko district, far short of their 70% prediction.

Although these facts are manifest, some ruling All Peoples Party (APC) bid guns are hell-bent on subverting the will of over 60% of the people of Sierra Leone, who have already voted against the incumbent party.

It has also emerged that contrary to their predictions of carrying the Kambia District by 60% has faltered under the heavy barrage of Dr. Yumkella and his National Grand Coalition (NGC).

The SLPP and the NGC combined to give a stiff competition to the APC in Koinadugu, while the two also skirmished with APC in Falaba and the SLPP took at least two Parliamentary seats in that newly minted district.

The APC took its last stand in Bombali and Tonkolili Districts, but even there, their vote percentage decreased to around 70%, lower than their 80% predictions.

The vote share of the ruling APC and their Presidential candidate in Kenema, Kailahun, Bo, Pujehun and Bonthe districts stands at less than 10%.

Meanwhile, the SLPP scored 90% on average in those Districts, except Moyamba where they scored over 70% of the votes.

From the foregoing, one can agree that it is mathematically impossible for the APC to win the March 7, 2018, elections.

As a matter of fact, the APC Presidential candidate, Dr. Samura Wilson Kamara has lost this election to the SLPP candidate, Ret. Brig. Julius Maada Bio by 10% (+/- 3% margin of error).

Although these facts are manifest, some ruling All Peoples Party (APC) bid guns are hell-bent on subverting the will over 60% of the people of Sierra Leone, who have already voted against the incumbent party.

Usually, reliable sources have informed this writer that some unscrupulous elements within the ruling party are allegedly working with some officials of the state to rig the process by replacing the real RR Forms with fake ones that give Samura Kamara victory.  If this allegation is true, then it will signify the biggest subversion of the state since the RUF war.

It is therefore very important that we continue to appeal to those leaders in the APC and their partners within the state machinery to see reason and step back, for the good of the nation.

The people of Sierra Leone have already voted since March 7. All they expect is that the result reflects their votes. It will be foolhardy for anyone to expect that the citizens of this nation will accept anything other than their verdict.

As at press time, the Chairman of the National Electoral Commission (NEC) announced 25% of votes in the afternoon and a further 25% in the evening.

The SLPP has projected a 10% (+/-3% margin of error) in the elections. Some independent sources have put it at between 3% to 5% in favour of the SLPP. If this holds, then it will put a lot of pressure on the ruling party.

Whether they will concede or continue with the doomed effort to, in the words of their opponents, “win power at all cost”, remains another issue.