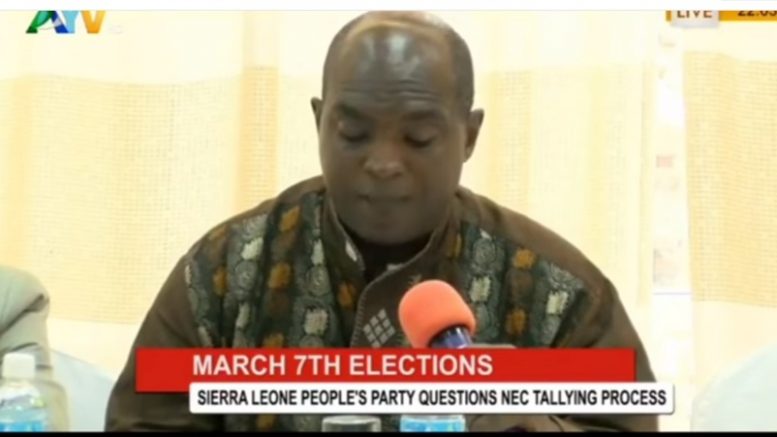 For us, this is a question of the survival and PROGRESS of a NATION that has consistently been classified as “the worst” in everything in the world even as we see the leadership being described as “the best” in the world!

SLPP National Campaign Chairman, Dr. Alie Kaba has gone on air and, on record, to substantiate severe attempts by the APC to subvert the results of the March 2018 elections in Sierra Leone.

Counting of the elections took place at the polling stations on March 7 by NEC officers.  It took place in the presence of all Party representatives.  The tallying of the ballots reflect a no runoff victory for SLPP.

APC is desperately trying to force the idea of a “run-off” by coercing NEC officials to tamper with the results of the elections.

A Facebook posting by Kortor Kamara explains where we are in the process.  Here is what he has to say:

#SierraLeonedecides: I’ve spent so much time explaining to people that NEC is not counting the ballots, which have already been counted at the various polling centers at the close of elections on Wednesday. All that the NEC Commissioner and staff need to do is to tally (input the raw voting data) the various already counted vote figures from throughout the country and declare a winner. Why this simple exercise is taking a whole life of its own and causing national anxiety in the country is incomprehensible.

All the political parties have access and or are in possession of the raw data and their tally centers should by now have the counted figures and winners known throughout the country.

NEC should stop this charade, and unnecessary tension in the country by releasing the official tallied results now!

The desire of the APC to stay in power for the sake of power, and their desperation to keep going even when the time is up is insulting to our people and is an attempt to undermine their rights.

Looking at the deplorable situation in the country at large, the shameless string of corruption scandals, the weight of horrible CALAMITIES inflicted on the suffering people of Sierra Leone; the APC knows very well that they had long lost the confidence of the people and they have no MORAL LEGITIMACY to continue to rule Sierra Leone.

That is the correct verdict that the people have given in this election, and it would be best if the APC LISTENS to the voice of the people instead of trying to drag out their departure with threats and tricks that WILL NOT WORK AGAIN!

Please do not listen to APC operatives who are out there conjuring up figures and trying to muddle the atmosphere with blatant self-crafted lies in the hope that they would be given another chance to force a “run off” on this country.

Why Is APC Always Scrambling For “More Time” Even When They Know They Have “No Time”?

“More Time” for what?

For more punishing “agendas” for the people and more “Mateus wine” cartons for them, like What-A-Man was drinking and bragging?

Dem been don di suffocate we country with them ALAKI, Leh dem nor try for confuse we with them JANFA!

For ten suffocating years, they have brought nothing for us except hunger and disease and death!

Now they have been told to leave in peace, and they are still trying to drag their feet by creating confusion where there is clarity.

They have been told to leave by the ballots, and they are testing the resolve of the people!

APC is only interested in themselves, not in the fate of the nation.

For them, this is a question of “survival”! Survival of their devilishly corrupt regime.

For us, this is a question of the survival and PROGRESS of a NATION that has consistently been classified as “the worst” in everything in the world even as we see the leadership being described as “the best” in the world!

This is a matter of bringing back sanity into governance and dignity to our people using a direction that is disciplined, fair and inclusive!

The desire of the APC to stay in power for the sake of power, and their desperation to keep going even when the time is up is insulting to our people and is an attempt to undermine their rights.

In spite of the concerted efforts mounted by the departing APC to provoke the situation by spreading falsity and creating doubt, we should just continue to stay calm and exercise more patience, while we quietly monitor the events as we await the final NEC pronouncements of the People’s verdict!

APC Over Votes In Over 600 Stations In The North.

According to Pastor Mohamed Sesay, APC has been caught red-handed for over voting by the NEC tallying machine at Wellington after the machine placed black flags instead of blue on almost all its results from Tonkolili, Bombali, Port Loko and Karene Districts.

We expect NEC to cancel all those results.

The expected cancellations will give the SLPP over 60% of the valid votes cast.

Meetings are now being held by top APC stalwarts who are discussing their unmanageable problem which they are blaming on overenthusiastic supporters.

In mounting suspicion of overt rigging by the APC in collaboration with some nefarious NEC members, police presence in Kenema has increased with the likelihood of intimidation should the result fail to reflect the genuine outcome of the elections.  The following report from BBC’s Umaru Fofana alludes to this scenario.

Here is what Umaru Fofana has to say:

“Police in eastern #SierraLeone say they’ve temporarily taken over the offices of the country’s three main political parties in Kenema ahead of the announcement of partial results later today. AIG Alfred Karrow-Kamara told me that his troops had ringed the offices of the APC, NGC, and SLPP on the grounds of security, to ward off any threat to the peace that could emanate from the gathering of party stalwarts.”