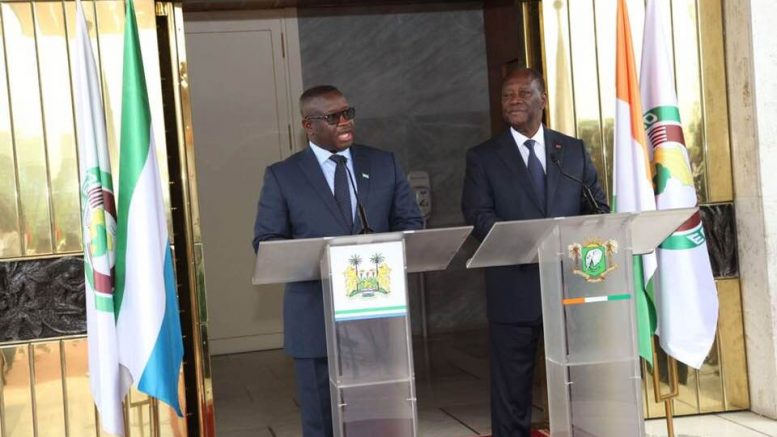 His Excellency President Julius Maada Bio and his Colleague Head of State, President Alassane Ouattara, have committed to deepening the bilateral cooperation between Sierra Leone and Cote d’Ivoire, during a meeting at the Presidential Palace in Abidjan on Friday, May 4, 2018. 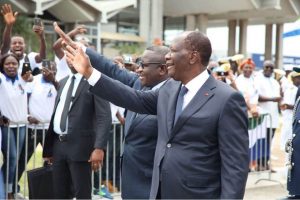 President Alassane Ouattara, who was hosting President Bio on a two-day visit, congratulated Bio on his election as President following an open, transparent and peaceful process, demonstrating the political maturity of the Sierra Leonean people.

President Ouattara said that both countries should step-up the bilateral cooperation, adding that agriculture should be a significant focus of that deepened cooperation.

President Ouattara also said that because of low trade value, both countries could improve on the import and export levels.

President Ouattara also shared with his counterpart his impressive economic growth performance which has been responsible for his country’s low inflation rate and high GDP figures. He assured President Bio that Cote d’Ivoire now enjoys political stability which will form a firm basis for bilateral engagement.

President Ouattara informed his visitor about an ongoing electricity project wherein Cote d’Ivoire supplies electricity to neighboring countries, adding that plans are on the way for expansion to the Mano River Union countries of which Sierra Leone is a member.

On his part, President Bio thanked President Ouattara for the warm welcome and hospitality as this was his second visit as President to the sub-region.

“I have received a huge mandate from the people. We have quite a lot to learn from Cote d’Ivoire, and one particular area is the agricultural sector to see how we can add value to our products and create employment for young people,”

President Bio told his counterpart. He also said that his new Government is determined to diversify the economy through agriculture, tourism, and marine resources. President Bio also indicated that his administration would improve on the governance of the mining sector so that the natural resources can benefit the people of Sierra Leone.

“This should be a new era for us to work together and have a great bilateral relationship,”  President Bio concluded.

Both Presidents later addressed the press at the Presidential Palace conveying similar sentiments and committing themselves to a deepened bilateral cooperation.

President Bio who is very fluent in French also held some of the informal discussions with his counterpart in the French language.