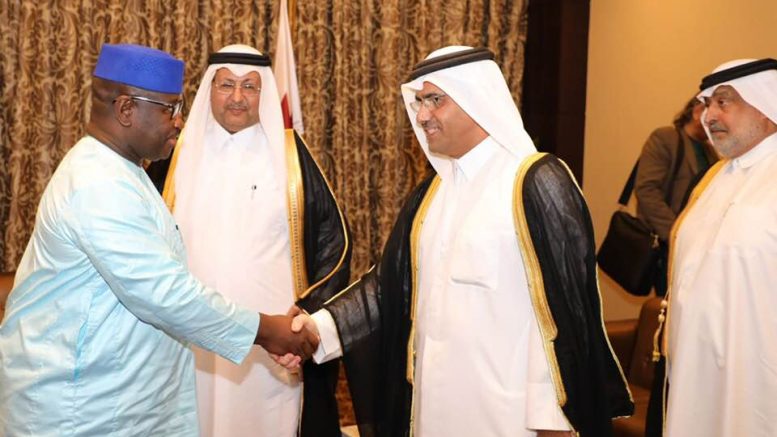 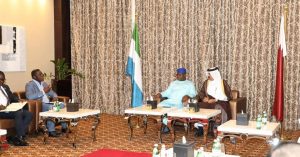 His Excellency President Julius Maada Bio has initiated the Sierra Leone-Qatar Business Council during a meeting with a high-powered delegation from the Qatar Chamber of Commerce and Industry in Doha on Saturday 21st April 2018 at the St. Regis.

During the meeting, His Excellency told members of the Chamber that Sierra Leone presented unique opportunities for private investment and that his new Government will create the appropriate environment where businesses have the confidence to invest in Sierra Leone.

As a very proactive President, His Excellency initiated the formation of the Sierra Leone-Qatar Business Council which will comprise members of the business community from both Sierra Leone and Qatar that will not only focus on different areas of investment but also enhance the economic cooperation between the two countries. However, His Excellency reiterated that Sierra Leone needs credible investors.

With his great passion for effective management of our mineral resources, President Bio also told the Chamber delegation that his visit would also be a learning process to know how Qatar has efficiently managed its natural resources for the benefit of the country and people. He used the occasion to thank the Chamber for the great hospitality accorded to him and his delegation so far.

In a short statement, the Chairman of the Governance Transition Team, Professor David J. Francis said that Qatar should take Sierra Leone as its strategic economic hub for West Africa because of its vast potentials. He also highlighted several areas including tourism, fisheries and the need for the operational airline to Sierra Leone that will be used to connect other African countries. Prof. Francis stated that as a new Government they would look at all recent agreements signed between the Qatari Government and the outgone Government to review.

The Qatari economy is one of the fastest growing economies in the Middle East and indeed the world. They have maintained high growth rates due to the high cost of hydrocarbons on the world’s commodities markets.