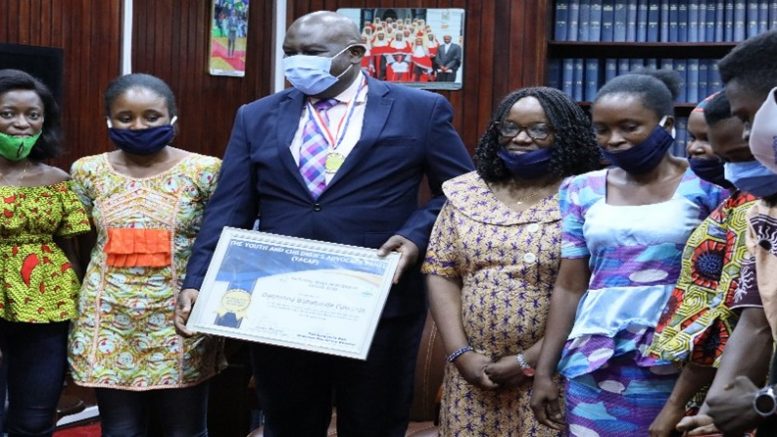 Judiciary of Sierra Leone Communications Unit, Office of the Chief Justice, Siaka Stevens Street, Freetown: Sierra Leone’s Chief Justice, His Lordship Desmond Babatunde Edwards has on Friday 23rd October, 2020 been crowned as He for She Ambassador for his unshakable fight to end rape and other related offences hindering the growth and development of children and youth.

Hon. Ambassador Justice Edwards was also given the National Girls Mentorship Award in recognition of his relentless and outstanding service to the women and girls empowerment in the country.

The Finance Director of Youth and Children’s Advocacy Panel, Yatta Jusu Jaka Ngobeh, said they were grateful for the commitment made by Hon. Amb. Justice Edwards through the establishment of the Sexual Offences Model Court.

“In our considered opinion, those strides cannot go unnoticed without awarding you,” she said, adding that “we should have given you this award during the celebration of the International Day of the Girls Child, 11th October, 2020 but it is still not late to award you in your office.”

On her part, Fatmata Jaria Bah, National Secretary General of Youth and Children’s Advocacy Panel, said their organization is not for profit making operating in Sierra Leone, Guinea, Liberia, Ghana and Gambia. She explained that the organization advocates for the right, protection and development of young people and for promoting the basic human rights of women and girls in Africa.

According to her, they also represent children in both national and international policy forum that has to do with their welfare and development. She said in three years, they have empowered over 3000 young people across the country.

Receiving the award, Amb. Justice Edwards said he was elated but short of words because the award came as a surprise. He said he believes action speaks louder than words and therefore commended the organization for recognizing his good work.

He thanked His Excellency President Julius Maada Bio for his commitment and support to bring tangible reforms at the Judiciary through the advancement of the rule of law, promoting justice, and guaranteeing human rights.

He assured that he will continue to give a new face and build public trust and confidence in the Judiciary.