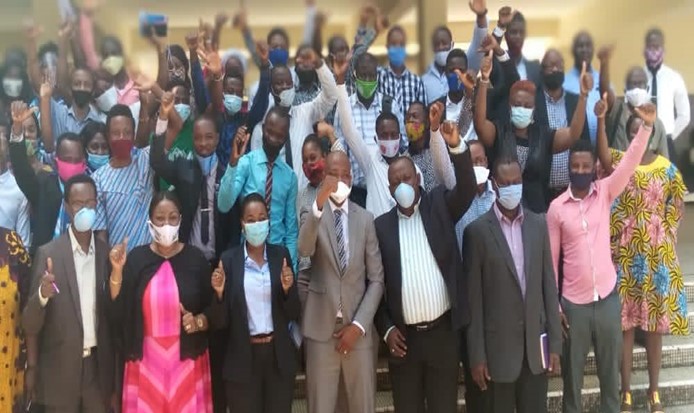 This unprecedented move by President Bio’s New Direction administration is in fulfilment of Cluster Six (6) page 148 of the National Medium Term Development Plan by prioritizing youth employment and empowerment to create better opportunities for the youth and make migration less attractive.

President Bio inherited the highest youth unemployment rate in the sub-region with many worrisome descriptions. Some international journalists even called it a ‘ticking time bomb’ that was ready to be exploded at any point in time if drastic action was not taken by the ‘new President.’ Frustrated with such deplorable situation, President Bio then placed youth empowerment and development at the nucleus of his administration.

Speaking to me after the passing out ceremony, Mohamed Kanu said he hailed from Binkolo, Northern Sierra Leone and was shortlisted for the job. Asked about the sustainability of the job, he said he is satisfied with the salary and other facilities expected to be provided to them.

“The job has security and I want to commend President Bio for providing jobs to some of us who aren’t university graduates,” Kanu said, adding that the process was free and fair considering the fact that I am not from the South-East but was fortunate to be shortlisted for the job.”

Last week again, the National Youth Commission headed by Thomas Ngolo Katta and Emerson Kamara organised an orientation training for the placement of Four Hundred and Forty-Five (445) young graduates across various institutions/organisations through the Graduate Internship Programme. They young graduates will not only be receiving monthly stipends but they will have sound experiences during their stay in the various offices.

Aside from the job creation, the Government has provided the platform for young people to see agriculture as an engine for socio-economic growth in the country, hence the birth of the Youth in Agriculture Project successfully supervised by the Deputy Minister of Youth Affairs, Hon. Lusine Kallon. This project, according to the Deputy Youth Minister, has been piloted across all the regions and jobs have been provided for those youths.

The Government of Sierra Leone’s new Medium-term National Development Plan (2019–2023) has been founded on a strong political commitment to deliver development results that would improve the welfare of Sierra Leone’s citizens. The plan charts a clear path towards 2023 en route to the goal of achieving middle-income status by 2039 through inclusive growth that is sustainable and leaves no one behind.