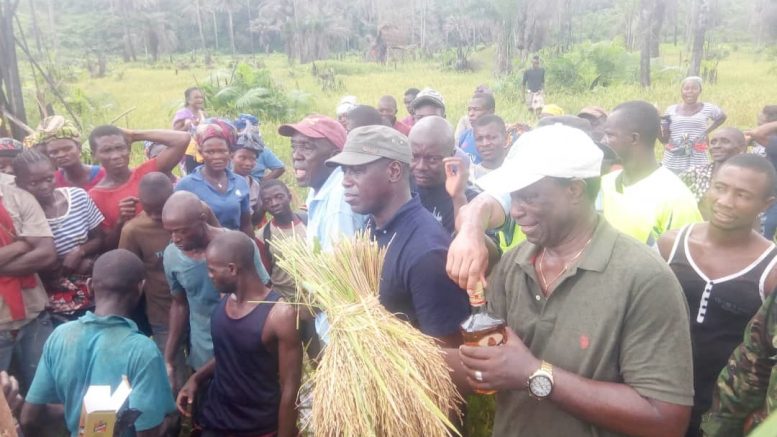 Agriculture is one of the Bio Government priorities in Sierra Leone. As a result, massive rice cultivation has been increasing under the New Direction Government.

The Chief Minister, David John Francis, is leading by example.

Francis’ visit to his 444 acres farm was to start the new rice harvest of the 3-months rapid yield hybrid nutritious variety. Under the brand name, ECO, the rice is now available in the market for the affordable price of Le200,000 for 50kg.

Addressing the local harvesters and other dignitaries at the farm site, Professor David Francis appealed to farmers to embark on agricultural production with all seriousness.

He said the government is ready to support them in making sure rice is affordable to all Sierra Leoneans.

Eventually, Professor Francis noted that this reduces the government’s burden to import rice at a substantial foreign exchange cost.

The Chief Minister also informed the people that were present that because of the massive rice plantation, the harvest on the farm will continue until February 2021.

In August last month, the Chief Minister officially launched the first batch of his ECO Rice product at the lowest price of Le200,000 for any 50kgs bag.

Professor Francis explained that ECO rice Stores will be opened in all District Headquarters Towns, starting with Bo. Kenema will be the national headquarters of ECO Rice Production Company.

“This is what the New Direction is all about. Credible and sincere politicians like the Chief Minister promote rice self-sufficiency and food security in Sierra Leone,” one notable stakeholder observed.

“If only other politicians can follow the example of Chief Minister, then President Bio will achieve his food security vision in Sierra Leone.”