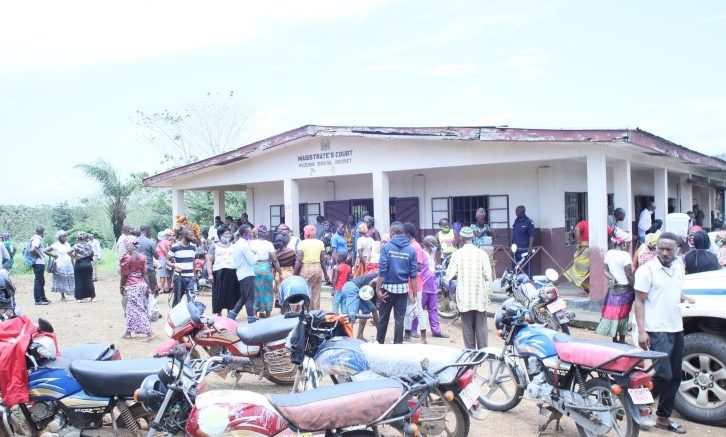 By Elkass Sannoh in Pujehun Town

Under His Lordship’s leadership, Justice Desmond Babatunde Edwards, the Judiciary of Sierra Leone, focuses on expeditious trials across the country.

Twenty-Seven out of the 43 cases to be heard are for sexual penetration – one for murder and drug trafficking.

The High Court Criminal Sessions, which is fully funded by the Judiciary of Sierra Leone, commenced in Pujehun, Port Loko, and Kailahun on 31st August and will end on 11th September 2020.

For Port Loko and Pujehun and Kailahun will end on 16th September.

The remaining cases are theft, conspiracy, wounding with intent, and burglary.

The sessions are being held in places where there are no sitting Judges.

On day one in Pujehun, three accused persons were sentenced to 8 years. One charged twenty-two years old Momoh Ngombu was acquitted and discharged after being remanded for two years and three months for theft.

The three convicts made a confessional statement and pleaded for mercy as first-time offenders.

The Deputy Chairman of Pujehun District Council, Councillor Mohamed Mansaray, commended the Honourable Chief Justice for funding the High Court Criminal Sessions. Mansaray said Justice Desmond Babatunde Edwards had brought many reforms in the justice sector to ease the suffering of the ordinary Sierra Leoneans. They have been deprived of justice for the wrong reason.

Mansaray thanked and prayed for the Chief Justice and his entire administration for the gesture to facilitate the transportation of witnesses to aid the speedy trials of accused persons and complainants.

Mansaray said that “this is leadership with a clear vision as envisioned by President Julius Maada Bio.” Adding that transportation has undermined expeditious trials and will often frustrate the complainant, including the accused persons.

The second time Criminal Sessions of the High Court are being held outside the regular jurisdictions of Freetown, Bo, Kenema, Makeni, and Kono. In areas such as Kailahun, Pujehun, Moyamba, Mattru Jong, Port Loko, and Kabala, the first from February to March this year.

As part of this second round of Criminal Sessions of the High Court in the provinces, Tonkolili-Magburaka will be holding Sessions for the first time. Like what happened with Mattru-Jong, Kabala, Pujehun, and Kailahun in February to March 2020.