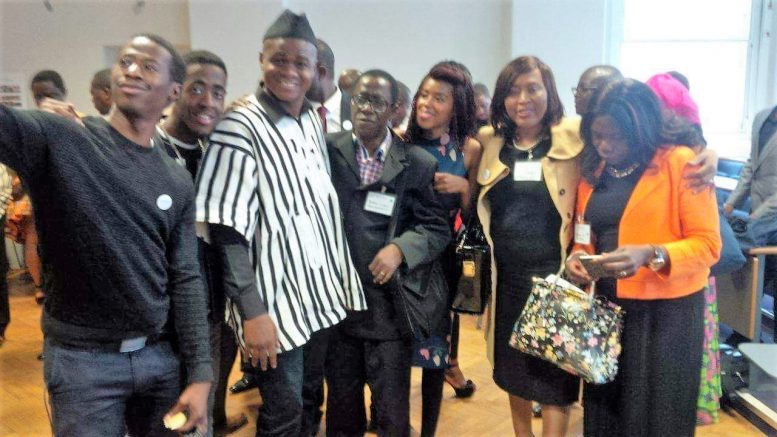 The Sorry Saga Of Mayor Emerson Lamina Striving In The Graveyard Of Good And Honest Men!

Those who prefer to ignore the lessons of history are bound to suffer the repeated ills of its consequences.

…And that is the problem right there for many Sierra Leoneans!

You don’t need to be an expat chronicler on the ravages of debauched democracy to understand that the APC party is a veritable cult built on blood and lies and flowering on coercion and deception.  CORRUPTION is just a beautiful garment for this collection of people who have continued to grow fat on the land while our nation sickens and dies.

The bizarre irony is planted in the NEEDLESSNESS of the endless suffering endured by the masses many of whom still seem to believe in the ghoulish quality of democracy being served to them in the form of baited political speeches painted with vain promises and laced with juicy lies.

To understand the roots of APC’s growing malfeasance, one needs to look no further than its founding father- Siaka Money Bandaylay Stevens- a manipulative megalomaniac machinery of a man who set the dark tone of calumny and erected the foundations for future scroungers in the APC to thrive on. BANDAYLAY lived on the mantra of MONEY (wusai dem tie COW……) and the shameless perpetuation of IGNORANCE (dem say, Bailor Barrie…..). It took him years of dedicated Machiavellian machination to dismantle an excellent educational system starting from our highest institution of learning down to the nascent vocational efforts that were beginning to sprout around our railway transportation. Then he surrounded himself with “COWS” which grazed on the country with disdain. He proceeded to slaughter good honest men who warned him off or challenged his excesses. Straight-talking patriots like Ibrahim Bash Taqi, Mohamed Sorie Fornah, and Governor Sam Bangura.

For their fervent forthrightness, many men were hanged, decapitated and acid-ed!

Decades following that ignoble era the APC has not changed color or direction. If Siaka Stevens killed scores by hanging, the criminal inefficiency and corruption that ballooned under successive APC governments resulted in tens of thousands of rebel massacres.  Thousands of Ebola deaths, including the loss of some of our best doctors and nurses, put a hole in the heart of a healthcare system that may take decades to recover.

The real tragedy is that all reasonable attempts to reverse this negative trend and install sanity in the system always meet with inexplicable resistance and outright barbarism by those who flourish on the death of our nation.

An Example On The List Of APC Criminalities Against Our Nation!

The unjustifiable sacking of Mayor Saa Emerson lamina, precisely one year ago today, is one of the greatest injustices committed against the Kono people by this corrupt APC cabal!

In 2012, Mayor Lamina was voted into office with a landslide majority, defeating the father of Diana Konomanyi, the long-serving town clerk of Koidu city council.  Saa Emerson Lamina scored 165 votes while Diana’s dad, F.D. Konomanyi, was whipped into touch with eight votes. It is hard to think of an electoral humiliation on such a cracking scale against someone who had everything to back him up.

When Diana became Minister, the Mayor became a target!  And the move to unseat the very popular “people’s mayor” was reported to have got the blessings of the president himself.

By depriving the Kono district (and indeed the Sierra Leone nation) of the services of such an intelligent, hardworking exemplary leader Diana Konomanyi and her APC caboodle inflicted one of the worst wounds against natural justice and national hope.

The only crime committed by this dynamic young man was to dare to dream high, stand up straight for his people and justice against an international mining conglomerate (OCTEA) that was bankrolling the APC operatives while impoverishing the Kono people and damaging their land.  When they failed to buy the Mayor’s honesty they hunted him down on the false allegations that they couldn’t prove, even with the crooked tools of their skewed system.

It is such a shame that ours is a country where good men like Mayor Lamina can be so unceremoniously kicked aside.  Individuals like Karamo Kabba, who go around insulting the mothers of the Kono people, are made to jump from ministry to ministry like one would skip a bowl of “sakpa” for “goat soup” at a friend’s birthday party.

And the crime of the people?

Speaking out against those who had made their city a no-go area by digging around it and flooding their homes.

It is a shame that such a promising young man as Mayor Lamina could receive treatment in such a criminal fashion without reason or merit.  It is such a head-lowering shame that our nation can stand aside and let this kind of thing happen as nothing happened.

It Is here, Where A Nation Begins To Die!

It is how The Future dies even before it is born!

It is how we destroy ourselves while we sit and blame God for not giving us the things we need!

There is a disabling odor of collective criminal complacency whenever good men are left to languish alone in the pursuit of national goals or ethical ends.

It is pathetic that the majority of us are yet to reach that level of consciousness that would prevent our rogue politicians from uprooting the healthy seedlings off our land and choking them out at will!
Have we not been always taught (from home to school to work) to be consistently honest and conscientious? Were we not told, a million times, that it is good to be right?

In a more conscious society, the DASTARDLY INJUSTICE inflicted upon Mayor Lamina would have been enough of a catalyst to send the perpetrators (and the government they represent) ignominiously crashing into political oblivion.

I hope that the people of Kono will understand the more significant implications of what the government has done to their elected Mayor and our elected Vice President, and take the right actions in the election booths!

And so should all Sierra Leoneans, for the countless evils that this government continues to hatch out in our nation.

millions of “kickback” dollars unaccounted for, in exchange for painted Chinese buses

the trashing of our revered FBC, leaving students to hop and crawl up and down that long meandering hill like starving forest frogs

spending hundreds of thousands of dollars to chatter a plane and fly to New York to dance like heartless clowns even when they were preaching “AUSTERITY” to us and imposing a “financial emergency” on us.

the stripping of Sierra Rutile of all “governmental shares” (zero cents) while the APC appointed MD has stuffed up so much money in his pockets that he is now traversing the country boasting of enough dollars to buy the presidential seat to house his buttocks.

the phony ANTI-CORRUPTION COMMISSION which is one of the worst camouflages in the history of kleptomaniac rule, with the head of that bogus body doing so “well” to protect his thieving clan that he was rewarded with the keys to a key ministry and christened to go ahead to campaign for the highest seat in the land.

Does anybody have the space to list the ills of this government that tries to fool us using “ROADS” as an excuse and piling up millions of dollars in debt for generations yet to come?

Don’t they realise that the people are beginning to understand that the so-called ROAD PROJECT is nothing but a convenient conduit for siphoning money into their private coffers?

HOW CAN A GOVERNMENT THIS STEEPED IN INJUSTICE AND LOOT ever stand the presence of an honest God-fearing man like Mayor Saa Emerson Lamina, the HOPE OF A FUTURE CLEAN NATION?

Mayor Saa Emerson Lamina,
THANK YOU for proving to all that not every Sierra Leonean is a bendable crook!
THANK YOU for refusing to sell our people, even when the price was hiked!
THANK YOU SO VERY MUCH for fearlessly standing up for fairness, at the worst of times!

IT IS BECAUSE OF MEN LIKE YOU THAT THE HOPE STILL LIVES ON!
AND WILL LIVE ON FOREVER!!!

For that, and even if only for that, I can never thank you enough, brother!