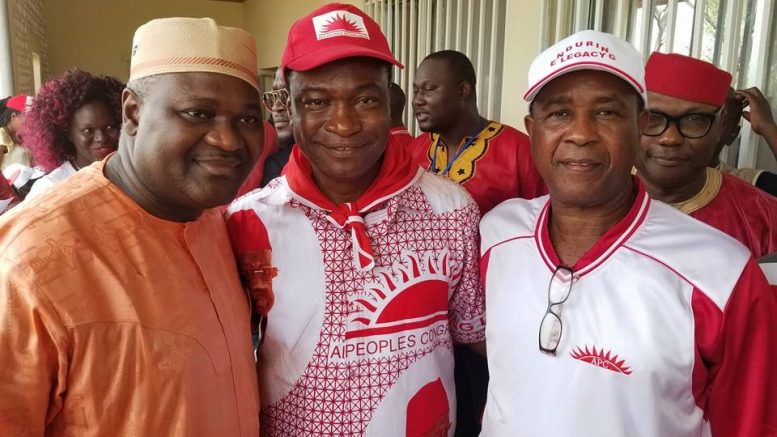 ELECTIONS: SHIP AHOY BUT MANY CAPTAINS

– The election ship is ready to take off, the horn has already been blown, the engine is revving but the captains are many and the crew uncertain about what is going on. Onlookers are certain that it is heading towards Port “March 2018” but cannot quite fathom who the Captain is that will dock it at the disembarkation port.

Now that the real date for the elections have been announced the flagbearer aspirants are in overdrive. Initially silent the APC seems to be stealing the limelight more lately. Flagbearers are coming out of the woodworks by the day- old guards, new guards, uncertain guards, etc.

Adviser to the President, Alpha Kanu who has described himself as “the apprentice” to President Koroma has made good on his past statement that he would throw his hat into the ring. The Port Loko party stalwart who has held the positions of Mines Minister, Information Minister and Presidential Affairs Minister and who has known President Koroma for a long time would on paper seem to be one of the frontrunners. He has however been dogged by his record and in an interview on Radio Democracy was extensively grilled on several dubious issues with which he would seem to have been associated including the “Abuja gave scandal” which left several pilgrims stranded in Abuja, problems with inflating the cost of air tickets and others. Ever the eloquent spokesman, he spoke with confidence, dissociating himself from these scandals and promising to further extricate himself by more fully addressing these issues in future. He mentioned that he was ” as clean as a whistle.” It has yet to be seen what support he would get from Port Loko especially from his Port Loko brothers like Hon Kemoh Sesay.

There is a new kid on the block- Alimamy Kamara, Ambassador to Iran and former Youth Affairs Minister who has been a strong pillar of the APC youth wing in the past.  Obviously, instigated newspaper reports describe  him thus:

“He is a reformer, an aggressive worker who is a ‘go-getter’ and he is perceived by many, as a “radical reformer”. A patriot and a unifier that loves his country, Sierra Leone. He is full of energy and most times, restless to see the success of a program that will positively impact the lives of humanity. He ardently believes that “the Republic of Sierra Leone does not belong to all tribes in Sierra Leone. The truth is, tribalism kills and destroys”. His stands on corruption make his political detractors misunderstand him. Until and useless one gets closer to him, you will not realize that he is one of the best Sierra Leone has.”

This is just a bit short of a declaration for sainthood!

Alpha Kanu’s resignation has ostensibly been followed by that of Keifala Marrah, the Bank Governor.

Then there is the Sierra Leonean Accountant from the USA Bassie Kamara, who says he will do “better” than President Koroma if elected-probably the only one with the testicular fortitude to say so-do better than Messie? He is quoted as saying:

“I want to continue where the President stopped and do better in areas where he failed,” He said his primary focus when elected will be to undertake large-scale commercial farming with a centralized database system and strategic initiative department. “I will flood Sierra Leone with investors from the United States of America where I have many business contacts.
He stated that the 2018 election is not about APC and SLPP but the destiny of Sierra Leone.”

These declarations follow on the heels of John Sesay’s, Joseph Kamara’s, Alimamy Petito Koroma’s, Lawyer Koloko’s and others which seem to be more muted.

Of particular interest is the fact that the APC Youth wing is doing all it can at the moment to stay clear of any trouble.The National Youth League President, Bai Mahmoud Bangura, has said that the pending National Youth Conference  is a youth conference and not for intending presidential candidates to campaign…..“I want to make it categorically clear that we will not tolerate any intending candidate to spoil our conference with their campaign rhetoric, because we still carry the Chairman and Leader’s agenda, and until the APC announces the new leader we will not support and encourage anyone in our conference to a campaign.”

Now that the gloves are off it is worth taking particular note of statements made. Alpha “clean as a whistle”  “apprentice” Kanu has been accused of “leaking” a wedding picture on social media showing him sitting behind his “driver” Ernest Koroma at his wedding. Ever his ebullient self, he denied he leaked it but freely admitted he was the groomsman, had known the President from “prehistoric days” and that the picture showed them to be distraught….. “We were really concerned at that time as Sia (first lady) was very late and we thought she was not coming- talk about being saved by the bell. Alpha Kanu warned those public officials who had an eye on the flag bearership but had not resigned to do so by midnight on March 7 or be disqualified. In what appeared like a dig against his opponents he reminded the audience that this list includes Ambassadors and Ministers. We are indeed living in interesting times.

The combative Alimamy Kamara thinks that there are many now vying for the flag bearship that had a covert relationship with the erstwhile SLPP government and had a questionable APC pedigree. He had served the party through thick and thin, and if anything his youthfulness was an asset. It would seem that apart from the rumour about Victor Foh, the current list of flag bearers is liberally spread across the North-Keifala Marrah from Koinadugu, Alimamy Kamara, Joseph Kamara and John Sesay from Bombali, Alimamy Petito Koroma and Sam Sesay from Kambia, Mr “Clean as a whistle” from Port Loko etc .

Not to be outdone the other parties are also readying their captains and it would seem the ruling party may be paying an interest in their races-perhaps too much interest. Mohamed Kamaraimba Mansaray, the Alliance Democratic Party, has been on the ropes recently with some dissent within the ranks and quite understandably he seems to be blaming it on outside interference by those who want to put paid to his ambition. Ibrahim Soummah, Deputy Chairman of the Alliance Democratic Party (ADP) described Mohamed Kamarainba Manasary, as “a fraudster, dictator, and corrupt leader.” He called for the resignation of the Party Leader and described the operation of the party as a one-man show run by the Leader. He stated that Kamarainba does not account for any transaction with regards to the funds he receives from the diaspora. Kamaimba has dismissed the accusations. He referred to the mandatory audit report submitted to the PPRC annually to authenticate his transparency in running the affairs of the Party. He added that such allegations lack proof. “Soummah cannot produce any evidence in supporting his claims,” Kamarainba said.

Even hitherto dormant parties are coming to life. The Vice-Chair of the National Progressive Democrat Party (NPDP),  a party formed in 2013 but registered by the PPRC in February 2017, Wadi Williams, said: “Our flag bearer will be the product of a process. During our convention, any member could contest as a flag bearer. Whoever wins will become the flag bearer of the Party”, process, indeed!

Before the ship could take off however Charles Margai of the PMDC decided to have an open fight with Dr. Sylvia Blyden, each bloodying the other.

Charles wrote in a press release: “I have read with disbelief Dr. Sylvia Blyden’s contribution to the ongoing discussion on the constitutionality or otherwise of the election date – 7th March 2018.I appreciate the fact that Dr. Blyden is neither a Lawyer nor does she posses the discipline to interrupt legal issues (complex or otherwise). In this regard, I make allowances for the lapses and naivety in her presentation. “

Lapses and naivety by Sylvia? Not one to disappoint Sylvia put on her gloves and starting with the Holy Bible she graduated to other books:

“The Holy Bible says: ‘Your works shall follow you’ and indeed your work in amending the constitution in 2001 is following you Sir into 2017……….My second question for you is that since we all agree that there was no breach of constitution by our president; can you tell me whether it is not appropriate for the president to seek redress under the 1965 Public Oder Act for your grossly seditious libel against him? “.

Undoubtedly this public spat will continue and the rest of us should not “set fire.”

But what about the main opposition party the SLPP?  Now that there is peace, one has to hold his tongue until we see things through. All I can say is that there is light at the end of the tunnel, but there is a train coming from the other side. If we work swiftly on the peace process, we might be able to jump out of the tunnel before the train rams in.

The ship is about to take off but the waters are turbulent, and the captains are still jockeying for the best position on the bridge. Some may be thrown overboard and may need life vests. Stay tuned.

Editor’s Note: A.Hoy – a call used to greet someone or draw attention to something from a distance.