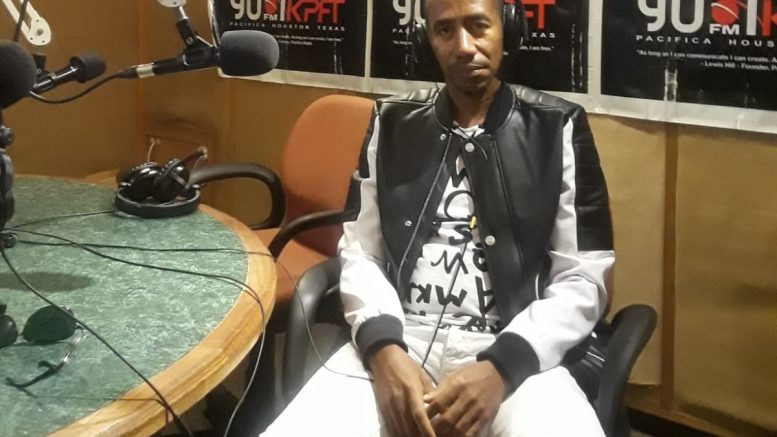 Veteran Kenema Journalist DJ Snowe In the USA On Business 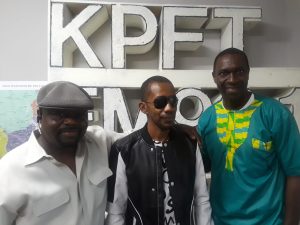 With five words, the Host of the World Music Express on Houston Public Radio KPFT 90.1, Harrison Kumi, welcomes Veteran Journalist and Popular Kenema DJ and business mogul, DJ Snowe, to the KPFT radio studio on Friday, June 23, 2018.  He was live on the 4 – 6 pm show.

His real name is Sidi Fofana.  He owns three radio stations in Sierra Leone.  One in Kenema, one in Kono and the other in Freetown.

DJ Snowe also owns one of the largest and most beautiful nightclubs in Sierra Leone, right there in Kenema.

An enterprising young man, DJ Snowe is about to expand his business empire into television. It is why he is visiting the United States.

Speaking about purchasing a television station to cover the Kenema District and beyond was the highlight of the KPFT interview.

DJ Snowe spoke about his desire to create jobs and will also assist in improving the media industry in the province as well as in Sierra Leone.  His visit to the KPFT studio was made possible by Mohamed Bah, the SLPP Young Generation Leader in North America.

I am here to purchase a brown new television station for live broadcast. I started as a low career DJ and had the inspiration to start the first community radio in my [Kenema] District.  All my life I have been a DJ with three radio stations and, one of the biggest nightclubs in the country.

Asked by Host Kumi Harrison how far he has gone with plans for the television purchase, DJ Snowe said he has been in the USA for three weeks now but could not make the investment in the America equipment because the system is all digital and not currently appropriate for Sierra Leone market.

DJ Snowe is, therefore, heading to Europe where they still manufacture analog television for the Africa market.

DJ Snowe plans to bring along the European engineers to install and train local youths to take over the upkeep of the television station.  He says, “We will work with them to train our engineers and our presenters.”

Kumi Harrison’s radio co-host appreciates the notion of investment in human capital as a new thing for Africa.  “The more we invest in human capital, the better for us Africans – and the world,” he quipped.

DJ Snowe was quick to mention that there is “no television station in our [Kenema] region.  No radio until we brought it to them.” According to a recent survey, he continued, “94 percent of people in Sierra Leone listen to the radio.”    “Adding a television is the next logical thing to do,” Snowe says.  “I have been working on this for a long time…I started with one radio station, and now I have three and a nightclub.”

According to Mohamed Bah, “for some us, people like Mr. Snowe is an asset to our country.  It is not an easy task to open a television station in any country.”

Radio Nogowa, owned and operated by DJ Snowe was the first radio station to announce the 2014 Ebola epidemic and continue its public service duty until the authorities contained the disease.

The station also played a pivotal role in the recently concluded general elections in Sierra Leone.

With 13 to 14 million listeners across the Houston Texas area and the surroundings, listeners were eager to hear what DJ Snow has to say.