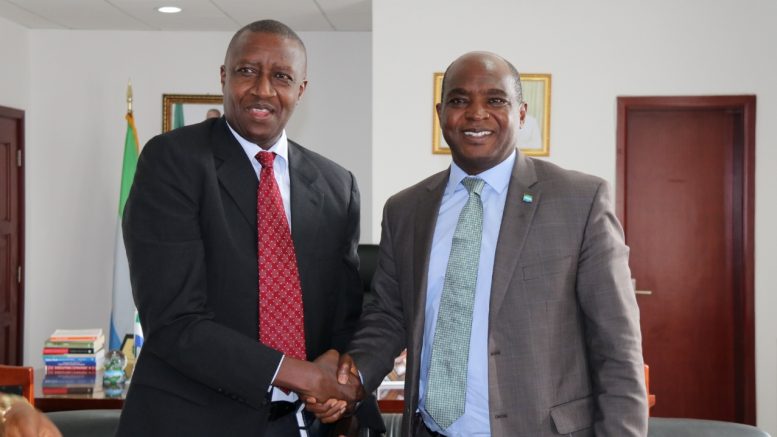 An ECOWAS delegation led by Dr. Gueye Abdou Lat, Director of the Regional Centre regarding the Early Warning and Response has paid a courtesy call on the Minister of Foreign Affairs and International Cooperation at his Tower Hill office in Freetown.

According to Dr. Lat, the objective of the visit was to inform the minister about ongoing developments in the ECOWAS Early Warning Mechanism, following the adoption of the system at the country level by Heads of States and Government during their 45th Ordinary Session held in Accra on 14 July 2o14. He also spoke on the respective Governments’ responsibility and role in the effective setting-up of structures that will provide a national institutional mechanism with support from strategic partners like the U.S. Government for the actualisation of the process.

The Director further stated that the German Government, along with the European Union, has pledged to support the process of establishment of the national centres and agencies in Togo, Guinea, The Gambia, and Sierra Leone. He added that this time around the emphasis was on ECOWAS of the people and not the state evaluation.

Dr. Alie Kabba, whilst welcoming the ECOWAS delegation to the Ministry on behalf of His Excellency, President Julius Maada Bio, extended profound thanks and appreciation regarding the visit. He remarked that the ECOWAS delegation was a testimony of excellent friendship and bilateral ties among its membership.

Dr. Kabba assured the ECOWAS delegation of the full support of the Ministry of Foreign Affairs both at bilateral and multilateral levels under the New Direction, stating that the Government was pleased to have the Centre in the country relating to Institutional Mechanism and the provision of technical training.

The Director thanked the Minister and staff for the warm reception accorded them and underlined their interest in intensifying collaboration in enabling to offer centres staffed with experts dealing with crises, security, elections, health, and issues of tackling food crisis, among others.