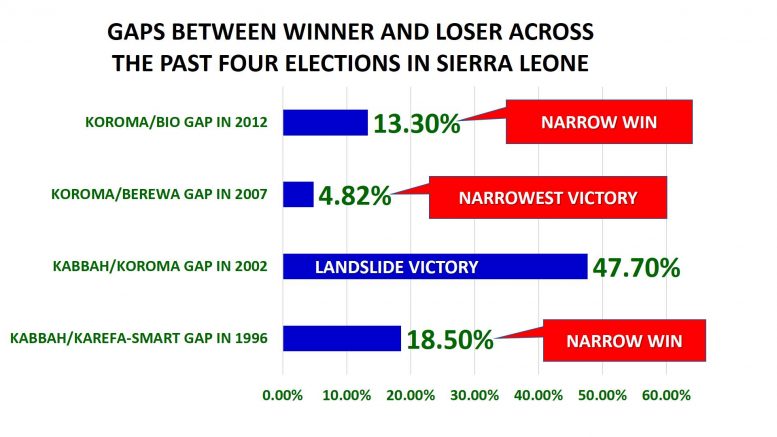 ACCORDING TO REPUTABLE ANALYSIS FROM SIDIE SHERIFF, ERNEST BAI KOROMA IS THE GREAT DIVIDER! 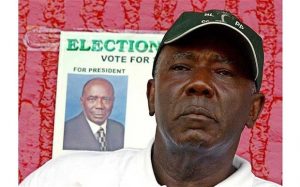 The WIDEST victory gap in a presidential election which Sierra Leone has experienced since multipartyism returned was in 2002 when Ahmed Tejan Kabbah led Ernest Bai Koroma by 47.7% of the votes.

The NARROWEST victory gap in a presidential election which Sierra Leone has experienced since multipartyism returned was in 2007 when Ernest Bai Koroma led Solomon Berewa by 4.82% of the votes.

Next in the NARROWNESS of victory gaps was in 2012 when Ernest Bai Koroma led Julius Maada Bio by 13.3% of the votes.

Next to the Koroma/Bio gap was the LESS NARROW Kabbah/Kerefa-Smart gap of 1996 which was an 18.5% lead by Kabbah over Smart.

Except if the election is rigged, the scenario in 2018 will be tripolar where almost all regions in the country will be divided among three or more candidates with an evenness that Sierra Leone has never seen before. In other words, 2018 will experience narrower victory margins that tend towards resulting into the “one third” effect – where all three first-round winners will each capture nearly ONE-THIRD of the votes, with pluses and minuses of course. I foresee single-digit victory margins in 2018’s first round polls for the president.

Editor’s Note:  This story is culled from the Facebook page of Sidie Sheriff, a reputable Social Scientist with a razor sharp mind for analyzing contemporary social and economic issues with stints of historical perspectives on social media.