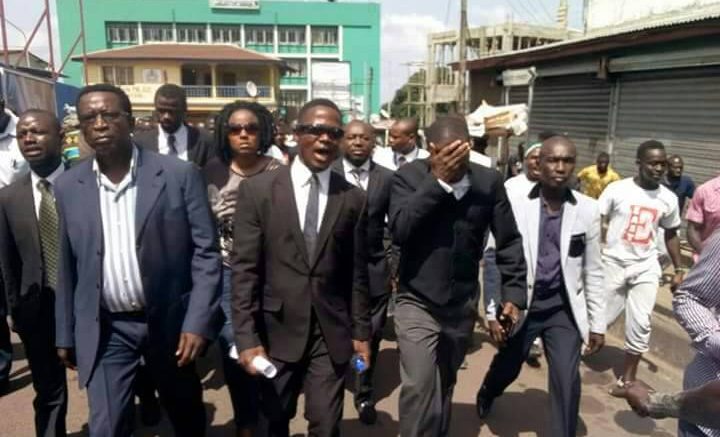 On December 17, 2010, 26-year-old Mohamed Bouazizi, fruits and vegetable street vendor set himself on fire in front of a government building in the rural town of Sidi Bouzid, Tunisia. This desperate act came in response to the continuous harassment and humiliation inflicted on him by municipality officers, resulting in confiscation of his goods on several occasions. Two weeks later, Bouazizi died from his wounds. In a spontaneous reaction to his death, public anger and violence erupted and quickly spread uncontrollably across Tunisia, leading to the then president Zine El Abidine Ben Ali stepping down about a month later. Bouaziz’s death emboldened many and marked the beginning of a popular revolution dubbed as the Arab Spring, which spread across the middle east, leaving many regimes ousted.

Many revolutions in history were started by a singular act.

Sierra Leoneans woke up this morning to a scene in a short breathtaking video of a young man throwing himself in front of a moving truck that was transporting Lahai Lawrence Leema, the publicity secretary of Sierra Leone’s main opposition, the Sierra Leone People’s Party (SLPP). Had the truck ran over the young man and killed him, no one would predict what public response would have been from the millions of sympathizers of Leema and supporters of the SLPP across the country. The act by the young man sends a warning that there are those that are close to their tolerance level in terms of what they can take from those in power. Helplessness can lead to unpredictable actions as evidenced in today’s video.

While Leema had no business storming into the Sierra Leone Broadcasting Corporation (SLBC) studio as alleged, such desperate act was caused by the continuous questionable show of biases by the SLBC, an institution that is funded by taxpayer money. Both sides apparently acted with some degree of recklessness and/or disregard. While one party took the law into his hands, the other’s action was an irresponsible and reckless disregard for the tenets of responsible journalism.

And to make matters worse, the police further politicized the issue by issuing a letter addressed to the Secretary-General of the SLPP, demanding the handover of Leema. It makes one wonder whether the police issues letters to organizations demanding the handover of each accused individual associated with them. There is no evidence to suggest that such a letter serves any purpose other than to create an atmosphere for unnecessary exchanges that have the tendency to build up tensions. The apportionment of blame and responsibility for the outcome of this incident can be judged on whether one’s focus is on the action of the individual or on that of the institutions involved.

Those charged with governance carry the greatest responsibility to maintain peace and protect lives and property. In the discharge of such a responsibility, actors are expected to demonstrate fairness in both facts and in appearance. And that includes the role of public institutions such as the SLBC, in providing a well-balanced and fair platform for all; and the police in administering of justice without contempt, fear or in favor of anyone at the detriment of others. As political tensions build up leading to the 2018 elections, sensitivity surrounding actions of state actors will come under increased scrutiny. How they handle situations has the tendency to move us forward or backward as a nation.