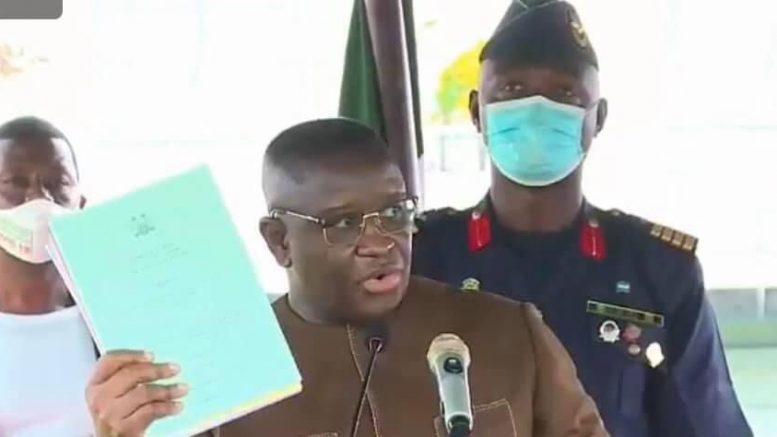 Before dwelling on the Commissions of Inquiry Reports and the Government White Paper, let me remind Sierra Leoneans that the Auditor General revealed that over 13 Million United States Dollars or about 12 Million British Pound got missing and was still not recovered by the then ruling All Peoples Congress (APC) Government.

According to the Auditor General, Madam Taylor Pearce, the money was not part of the donor aid provided to the Government/NERC under the leadership of the former Minister of Internal Affairs-Alfred Palo Conteh.

Also, the Ministry of Agriculture was a Corruption den with over sixty one Billion Leones (Le. 61,061,440.000.00) got missing under the leadership(s) of Dr. Sam Sesay and Prof. Monty Jones.

In one of his stunning findings, Justice Biobele George Will said the heads of EOC/NERC, Alfred Palo Conteh and Steve Gaojia were unable to produce 254 vehicles and motorbikes at the folding up of NERC.

During the two term of APC rule, no single institution was spared. Even private institutions connived to ransack the state. Today, those institutions have suddenly turned into ghost after bleeding the state at the suffering of the masses.

Investigations also revealed that the Government vehicles were converted to private vehicles to an extent that some Ministers took them to Guinea and Liberia for sale. Thanks to ACC for such discovery.

And just after the setting up of the COI by Constitutional Instrument No. 64 of 2018, those devils’ incarnate with tribal lens and backward political loyalty are sympathising with those “witches and wizards” that brought the country to its knees.

CORRUPTION IN THE DNA OF APC

Sierra Leone started experiencing day light robbery under the leadership of Siaka Probyn Stevens, one of the founders of the APC. Pa Sheki is popularly known for the Krio parlance: “Wusai Den Tai Cow Nar Dae e Dae Eat,” figuratively meaning a cow should graze wherever it is tied. This negative syndrome has become ingrained in the leadership structure of the APC to an extent that corruption has become “Legal.” Read Prof. Joe AD Ali’s *Sierra Leone Since Independence* to further broaden your knowledge on this.

The late APC President is remembered as the architect of corruption in Sierra Leone.  Utterances from public figures such as Presidents and politicians generally carry heavy weight; such utterances can even shape behaviours and create attitudes in citizens that may end up passing off as culture.

Over the years, corruption has become so pervasive in Sierra Leone that it has eroded the nation’s moral and ethical fabric.

Sierra Leone’s economy was a sham! Shamefully, before the APC was rudely voted out of political power the country relied on Over Draft before salaries were paid. Despite this debilitating situation, those backward Sierra Leoneans were celebrating because they were direct beneficiaries to corruption.

As long as we are willing to partake in it or not mind being its beneficiaries through our kith and kin, then corruption will remain endemic but President Bio said he is ready to sacrifice his life to end this trade.

We should not hesitate to label public officials and their private-sector collaborators as mass murderers, killing millions of people through inadequate public services compromised by corruption. Monies meant for drugs, roads, hospitals, schools and public security are siphoned away, making The Voiceless Sierra Leoneans vulnerable to premature death and the society more unsafe for human habitation.