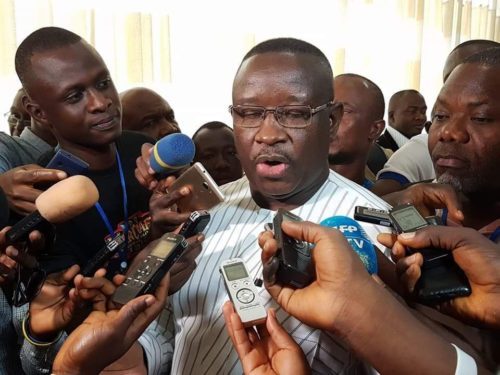 FOR EXHIBITING INTEGRITY TO FIGHT CORRUPTION

Following the recent publication of the Government White Paper and Commissions of Inquiry (COI) Reports, President Julius Maada Bio assured that he will fully implement the recommendations therein.

Today, Journalists especially some Editors of our renowned  media outlets showered praises on President Julius Maada Bio for reliving those Civil and Public Servants whose names were mentioned in the Government White Paper.

One among the many who commanded President Bio’s action is the Editor of Concord Times Newspaper, Alusine Sesay. The Editor said he was satisfied that President Bio took such timely decision to demonstrate his readiness to fighting corruption with integrity.

“Thank you Mr.President for doing us this favour,” said Editor Alusine Sesay.

Others wrote on their Facebook pages that indeed President Bio’s democratic credentials are in no doubt.

Another fastest growing Newspaper, Beyond Borders conducted a public perception survey. They submitted that majority of Sierra Leoneans called on President Bio to implement the COI recommendations to the letter.

Many people spoken to immediately after the release said President Bio’s landmark action to strike those public/civil servants has indeed sent a very strong message about his seriousness to eliminate corrupt officials in the country.

President Bio believes that his fight against corruption is above tribes, political alignment, religious beliefs, and social status in society. Even though one of the Justices, Biobele George will recommend that some of those corrupt officials should be banned from national politics or holding public offices, President Bio became very magnanimous that his fight is to retrieve Sierra Leoneans’ money. This genuine intention has received a standing ovation by the international community.