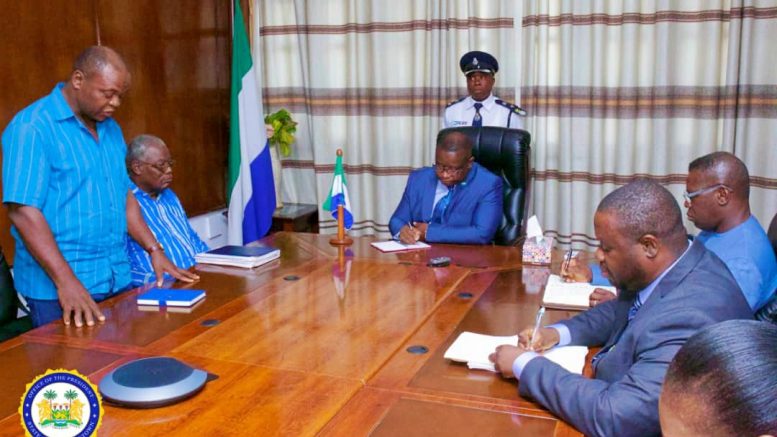 State House, Freetown, Tuesday 18 December 2018 – A high-level delegation from the Sierra Leone Labour Congress has called at State House to pledge their commitment to the Sierra Leone Peoples Party government and support the agenda of His Excellency President Julius Maada Bio.

Congress Secretary General, Max Conteh, said they were pleased to meet the President and commended him for his tremendous strides in improving the conditions of service for workers in the country since he assumed office in April this year, adding that the recent minimum pension increase was a case in point.

He noted that the Labour Congress had its own part to play in the development process of the country and assured of their commitment to supporting government in its priority programmes. He maintained that they were pleased so far with the new administration openness to consultations and engagements.

“We thank you for this opportunity because we believe as the fountain of honour, justice ends at your table. We also want to thank you for within your short time in office you have listened to our cries, one of which is the pension issues which we had battled for years before you came into office. You promised to take action on that and we are pleased that you have addressed that issue now.

“In our history, within the Labour Congress, this is the shortest time we have seen results from a government. Our demands and calls are being adhered to and we believe it is as a result of your concern that we are part of your governance structure. We want to pledge our commitment to working with you and will never allow you to fail. We believe in you and we want you to succeed,” he assured.

In his response, President Bio said that he was particularly delighted that there was a shared desire and commitment to move the nation forward, noting that he was ready to work with everyone in the best interest of the country.

President Bio noted that the country was not happy with the present impasse within the Labour Congress, particularly at a time when his government was busy rebranding the image of the county. He therefore called on the Congress not to allow politics to affect their usual operations.

“The development of this country requires the collective effort of us all. We are doing our own part of it and expect you to play your own. We are encouraged by how our reputation is being cleansed so far. Therefore, it bothers me when the reputation of our country is being tarnished. We need to work together and I will frown at anyone trying to involve politics in trade union issues,” he warned.