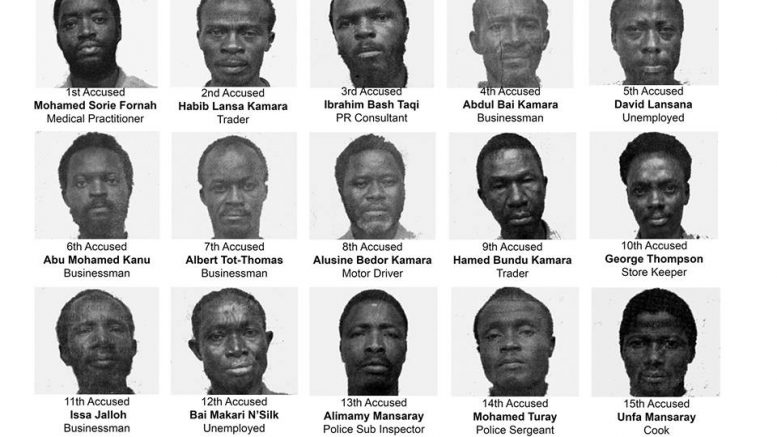 In 1967 Sir Albert brought this country to the brink of political and economic disaster. All right thinking people realised that Sir Albert’s insatiable desire for power and wealth spelt chaos and complete disruption of our social fabric.

What he wanted to impose upon this nation was a one-man dictatorship, shrouded by a fraudulent Republican Constitution that concentrated all powers in the hands of a single person.

In view of this menace to personal freedom and economic stability, I accepted the call to service, and, left what you knew to be a very lucrative medical practice to join the fight against that political monster.

As leader of the Opposition then you spearheaded the fight against this menace. All of us who followed you accepted your profession of a deep attachment to the tenets of democracy and the rule of law. As you also know, when the Military unwarrantedly usurped the machinery of Government and imposed a Military dictatorship on the people of this country, you found me more than willing to risk life and limb to restore Parliamentary democracy to this our beloved country.

It is nearly three years now since we assumed the reins of Government. Over this period I have had the opportunity of working closely with you. Many mistakes have been made during this period but till lately I had assumed that these were mistakes of the head and not of the heart. I now know that I was wrong.

You have revealed an uncanny dexterity at manipulating weak and untutored minds both at Cabinet and Party levels. Your conduct of state affairs is in line with your Trade Union experience, a mixture of trite jokes, cajolery and even violence.

The introduction or the continuation of cold and calculated violence into the politics of this country poses a major threat to the social and political unity of this country. You are fully aware of the events I refer to.

The shootings at the Freedom Press with the resultant death of an innocent child have never been investigated to the satisfaction of the thinking public. The wanton destruction of life and property at Ginger Hall during the Freetown City Council elections was as unprovoked as it was unnecessary. As usual the innocent, the very innocent children, were the sufferers. Again the nation has waited in vain for an explanation.

More recent, but no less serious, are the dastardly events at Port Loko. The heinous crimes committed there I put squarely at your door-step. I know, as you do, that you were the evil spirit behind them. I have spared no pains both in and out of Parliament to condemn the use of force and violence as a means to power. This is one fundamental area of disagreement between us.

A Constitutional Review Commission has been set up. It is now at work. In the interval, with you presiding, a so-called National Executive of the APC passed a resolution in favour of an Executive Presidency with all the powers of the state in the hands of one man. You yourself have never hidden your ambition to be such a President.

You set the ball rolling at the meeting I refer to. I vividly recall the continuous tussle between you and Protocol Officers about the playing of the National Anthem for you. His Excellency the Governor-General has on more than one occasion been subjected to serious embarrassment as to the use of the National Anthem when both of you attend the same functions.

This display of infantile vanity may appear trivial, but to me with a trained medical mind, they are the manifestations of a megalomaniac syndrome. It is the top of the iceberg submerged below a sea of personal shyness. This coupled with an insatiable thirst for power can only spell disaster to this country. I now realise that no method will be too mean for you to achieve this goal.

On my return from the USA and Britain I made my views on this matter very clear to you. I made it clear, that should you insist on this course of action and bring a bill to Parliament based on an Executive Presidency I will have no choice but to oppose it with all the forces at my command. As usual with you, the answer to a major issue was not enlightened discussion but the over-used joke.

I have noticed that our differences over financial policy have deepened with time. The Cabinet reshuffle of May this year was precipitated by the refusal of the then Minister of Works and myself to sanction the dumping of six million leones of the taxpayers money in the construction of a rock-filled road less than two miles long. This project, as I indicated in a letter to you, had neither economic merit nor did it stand to ease the traffic congestion which was the pretext for its conception.

Suppliers credit and pre-finance have a limited scope in the public finance of an under-developed country. Its misuse and abuse led to the near national bankruptcy of 1966-1968. You yourself have condemned the practice in your radio broadcast to the nation.

I have always maintained that pre-financing should be limited to a small area of projects which will contribute to the social well-being of our people. Among this category are the provision of clean pipe borne water and the expansion of our radio services.

In my discussions with World Bank and IMF officials I have indicated our general agreement with them not to engage in unnecessary pre-financing. You yourself have re-assured the World Bank along similar lines.

Recently I have noticed that rejected pre-finance schemes are being dusted and brought to Cabinet without my Ministry being given an adequate opportunity to make its comments on them. During my brief absence on a tour of duty you signed a contract against the advice of my officials for pre-financing the purchase of armored vehicles costing nearly Le700, 000.

At a time when soldiers are badly housed I wonder whether your priorities as Minister of Defence are in the right order. The Military were never given an opportunity to say yes or no to this scheme.

Recently you brought forward an elaborate scheme for police and army communication equipment. If accepted, it will cost this nation Le2.8 million. What I find curious is that the communication officers of both army and police put their requirements at Le300, 000, roughly a tenth of the cost of your Pye advisers.

The curious combination of an unrelenting drive to an Executive Presidency, armored vehicles to be manned by a specially selected troops primarily loyal to you, indicate that you intend to impose your will on the people of this country.

You have never failed to equate yourself with Sekou Toure, Kaunda or Nyerere. Sierra Leone is a different country Mr. Prime Minister and to be frank you are not a Kaunda or a Nyerere.

In other areas, policies are equally confused. We all know the repeated use of troops and police for the eviction of the stranger elements from Kono, but as the country knows this has become a cyclical exercise. You drive them with fanfare but quietly allow them to return for reasons that you alone can understand.

Your Kono exercise cost this nation Le600, 000 extra for the army and police in 1969. The bill for the latest exercise is still to come. In the meantime most of the Lebanese expelled by this exercise have now been allowed by you to return.

If our scanty resources cannot be used to create gainful employment for our people, then, as I have always pointed out to you Sir, we are now witnessing in the form of highway robbery. These are problems that will not be solved by armored vehicles or over-expensive communication equipment.

I have written at length so that the nation will understand. I am painfully aware that my resistance to these schemes has not gratified me to you. Yet I owe it to myself and to my country to do my duty as I see it. I had intended to attend the very important meetings of Commonwealth Finance Ministers at Nicosia and of World Bank and IMF at Copenhagen, but I am reliably informed of your intention to withdraw my accreditation to these conferences on your return.

The honour of this country is a matter of supreme importance to me and I would not allow you to ridicule this nation now as you have done in the recent past.

Finally, let me warn the nations of the World that should their citizens allow you to embark on a pre-finance spree in the terminal days of your regime this nation reserves the right to disallow these debts in the future.

With all these strains and fundamental differences on principles and policies I realise that my usefulness in this Government under you has reached a low ebb. I cannot sacrifice principles for position, but as I always say, let history be my judge. I therefore wish to tender my humble resignation as from today.

The preceding was culled from “Sierra Leone and its people,” a book by Bankole Kamara Taylor