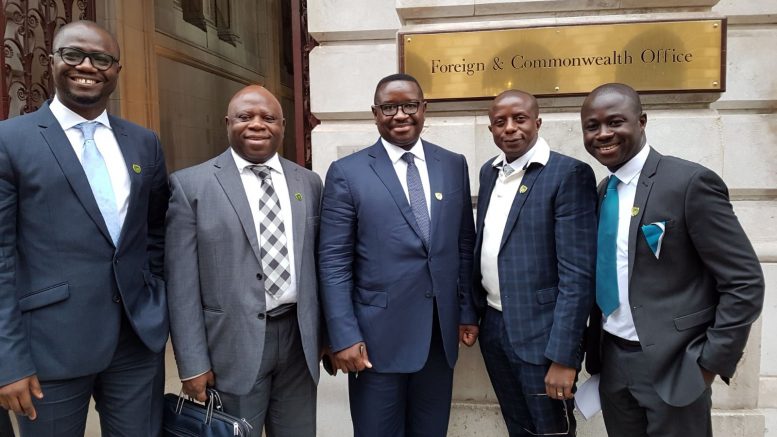 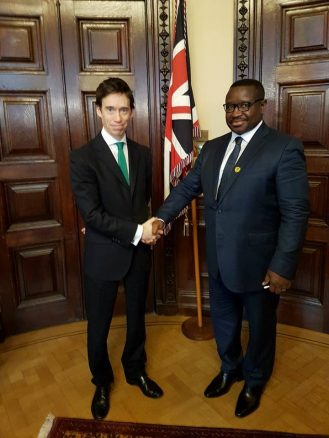 The United Kingdom trip of the SLPP Presidential Candidate, Rtd Brigadier Julius Maada Bio, continue to unfold as a significant international diplomatic success.  On Tuesday, December 5, 2017, the man widely acknowledged to be the Next President of the Republic of Sierra Leone paid a courtesy call on the United Kingdom Minister of State for International Development and Minister of State for Africa at the Foreign and Commonwealth Office, Rory Stewart OBE MP.

Rtd. Brigadier Julius Maada Bio who served as a former Head of State and very experienced in diplomatic relations used his courtesy call on the Minister to raise various concerns about the forthcoming elections and the threats to the country’s stability.

While Rtd. Brigadier Julius Maada Bio assured the Minister of his commitment and that of the SLPP to peaceful and non-violent elections, he also raised issues of the recent acts of political violence against the SLPP and its membership. Bio spoke about the recent killing of his supporter and stabbing of another; the recent attacks on SLPP members and the Party headquarters by the Police and APC supporters; the tearing of his posters as a conflict instigating action among others. He also told the Minister that as someone who laid the foundation for peace consolidation he would do everything he can to safeguard the peace and stability.

With the recent ruling of the ECOWAS Court, Rtd. Brigadier Julius Maada Bio also highlighted the sacking of the elected Vice President, His Excellency Hon. Sam Sumana to underscore the lack of independence of the Judiciary and that there is no confidence in the voters that the judiciary will arbitrate fairly and justly should there be a need for legal actions.

Bio recalled his 2012 experience with the Judiciary when his election petition against the rigged the election was thrown out by the Supreme Court. Bio stressed that the voters do not have trust in the court to dispense justice on election matters because of political compromise.

The National Secretary General of the SLPP, lawyer Umaru N. Koroma also cataloged many incidents of political violence and intimidation against party members.

The visit by Rtd. Brigadier Julius Maada Bio to the Minister of State for International Development and Minister of State for African Affairs in the Foreign and Commonwealth Office underscores Bio’s determination to continue to build on the bilateral relationship between Sierra Leone and the United Kingdom as President.