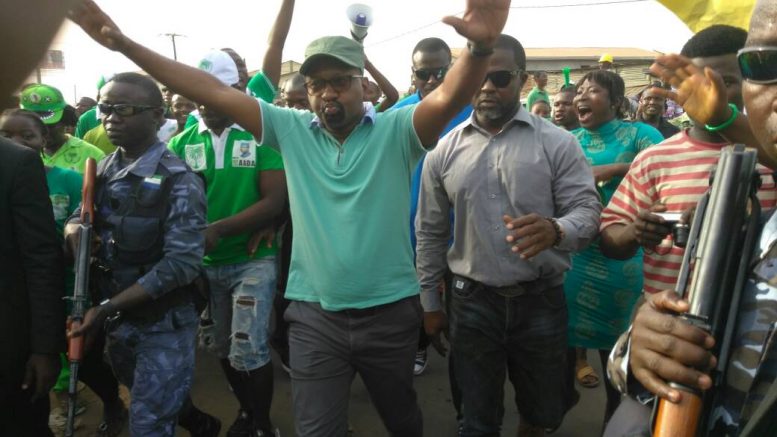 Dr. Mohamed Juldeh Jalloh shakes up Eastern Freetown.  His boss, Julius Maada Bio, is consolidating their Political gains in the Eastern Region.  What a perfect strategy! 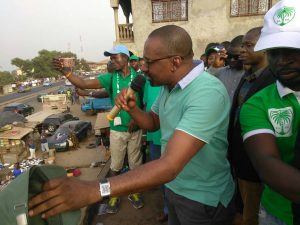 The campaign for the March 7 General Elections is officially in motion with a clear three-prong campaign strategy.  Credit for the idea goes to the National Campaign Chairman, Dr. Alie Kabbah.   The three-prong approach campaign strategy is a novelty in the SLPP and, to other Political Parties in the Country.

The innovative strategy took place on Tuesday, February 6.   So far, it is working well as results in Eastern Freetown indicates with the Vice Presidential nominee, Mohamed Juldeh Jalloh.  The VP candidate was terrific on the campaign trail.  He amazes SLPP members and supporters as well as the general public with his energetic and great campaign skills.

The crowd was expecting him to drive straight to the St Michel’s  football field.  That was where he was scheduled to speak to Party members and supporters. Instead, the former United Nations Diplomat, broking loosed from the crowd and his security details,  embarked on a door-to-door and shop-to-shop campaign,  meeting with the People and reinforcing the hope of the electorate in the SLPP.

To many observers, Dr. Mohamed Juldeh Jalloh’s approach was new.   Many confirmed it was the first time a VP candidate mobilized in such a manner.  The move generated huge dividends as more youths and women joined the campaign train.

These young men and women were perhaps mesmerized by the charm and friendliness of the youthful next Vice President.

The campaign train of the SLPP Vice Presidential nominee which as already stated started at Shell new road moved all the way to Rokupa on the same original highway and diverted to Brima Lane on the old road and finally ended at the St Michel’s football field.

On arrival at the ground, hundreds more of Party members and supporters were already seated and waited to receive Dr. Mohamed Juldeh Jalloh.

A FIELD FULL OF ENTHUSIASTIC SUPPORTERS AND ACTIVISTS

Addressing the very vast and jubilant crowd was the SLPP Vice Presidential hopeful.  He started by thanking members of the National Support Mobilization for Juldeh Jalloh. The organization is a consortium of many support groups.  Its head is M. B  Kallon aka The National Vovuzeler, a well-known contributor on radios.

Dr. Jalloh thanked them for organizing the great event which included the unveiling of many campaign billboards, accommodating the images of the SLPP Presidential and Vice Presidential nominees, Rtd Brig Julius Maada Bio and Dr. Mohamed Juldeh Jalloh respectively.

Dr. Jalloh in his statement reiterated the great governance policies his boss Brig Rtd Bio has promised to achieve when elected as President in March this year. Among the plans the  SLPP number mentioned were, free education, quality and affordable health care, sustainable energy and water supply at every home in Eastern Freetown and the Capital Freetown at large as well as for the whole country.

TRUE POLITICS IS HUMAN, AND POLITICIANS MUST HAVE ROOTS

According to the energetic next Vice President, it pains him to see little kids abandoning their home works for the sake of having a jerrican of water from old pipes.  He blames the APC government for the current poverty and sufferings Sierra Leoneans.   He implores his audience and the whole electorate to kick the APC out of power by voting the SLPP Presidential nominee, Rtd Brig Maada Bio, as the next President.

According to Dr. Mohamed Juldeh, the Former Head of State  Julius Maada Bio was the best Presidential candidate among all others, including Samura Kamara of the APC. He ended his statement by calling on every voter to vote Maada Bio and all other SLPP Candidates for Parliamentary and Local Council.

On his part, the head of Team in the office of the Vice Presidential nominee, Mr. Mohamed Massaqui who also doubles as Chairman of the occasion at St Michel’s, praised the organizers for hard work and commitment to the Party.

Massaquoi described Dr. Mohamed Juldeh Jalloh as the best Vice President Sierra Leone would be opportune to have after the March 7 voting. He encouraged the support groups to spread their efforts across Freetown.

During his welcome speech, Mr. Margai described Dr. Mohamed Juldeh Jalloh as a complete match to Mr. Maada Bio. He was therefore optimistic that the SLPP would win the election.

Meanwhile, report coming from Kenema in the Eastern Region has spoken of a huge welcome accorded to the Presidential nominee, Rtd Brig Julius Maada Bio. Bio, alongside the Vice Presidential nominee, Dr. Mohamed Juldeh Jalloh, departed Kabala town in the Koinadugu District after a well organized and hugely attended campaign in Koinadugu and Falaba Districts – in the Northern Region.

Editor’s Note: This story first appears on WhatsApp by Kanji Daramy in the Office of the  SLPP Vice Presidential nominee.