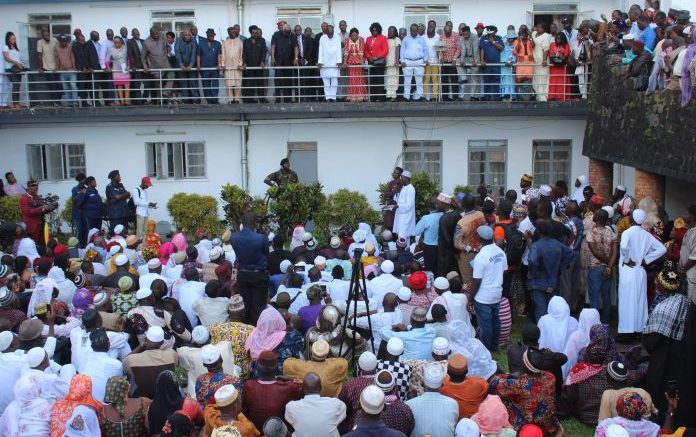 Muslims express their anger against tolongbo devil worshippers for stealing Hajj Kopor (MONEY).  The wicked APC devil worshippers are in big trouble with the Muslim Uma of Sierra Leone for using their positions to dip their dirty fingers into the Hajj coffers and steal monies meant for Sierra Leonean Muslims.

People who had said emotional farewells to their loved ones and gone through the rigors of “medicals” and secured their travel documents were turned back at the last minute because APC operatives had given the places meant for these  Muslims to their family members. They even sold some of the tickets to foreign nationals!

When news of the robbery broke out President EBK called the cheated Muslims to a hastily arranged “meeting”  in the courtyard of State House and (as usual) after cracking many stale jokes he promised “to get to the bottom of the issue” and punish the culprits accordingly.

Well, we know that EBK staged a similar stunt, in the wake of Ebola, promising to punish those who had stolen what he had referred to as “blood money.”

In both cases, it is needless to say that NOTHING came out of it!

In the case of the Ebola, the President knew that any “investigations” would necessarily have to start in the president’s office. It is the channel for receiving Ebola donations.

In fact, it was on President Koroma’s palms where the many billions of Leones and million dollar cheques landed.

As for the HAJJ ROBBERY, revelations point to the office of the Vice President as head by (of all people), one voucher-gate expert, Victor (High Barb) Foh.

In fact, intercepted telephone conversations between senior APC operatives at the time (posted on every Whatsapp forum) indicated that the entire scandal blew up when Victor Foh insisted on doubling his QUOTA figures. (The corrupt diction, is so disgusting).

How can you describe something provided by another country and meant for the poor people in your country as “my quota?”)

Some observers even suggested that the “doubling quota” request may have been because “the Pa” himself wanted a slice of the HARAM CAKE.

Otherwise, why was Victor Foh named by those who confessed in their recorded telephone conversations yet nothing happened to bring Foh to book even though president Koroma had promised “full investigations and serious consequences”?

APC has committed so many heinous crimes against the nation of Sierra Leone, but I would like to put these two as among the first five in the same category as when they sent a group of hoodlums to vandalize and demolish a church building perched on the edge of a 30-acre land sold to the Chinese.

Seeing the anguish of people who died in the most pathetic of circumstances, oozing blood and cut off from their people, AND YOU GUYS SIT AROUND AND SHARE THAT MONEY is something that is more than unbelievable!

Did you see the mothers who could not touch their children? Did you weigh the anguish of the fathers who were not allowed to bury their sons or the brother who had to stand aside and see his sisters die one after the other?

Did you feel the pain of the child who was wailing and running after the ambulance that was taking his parents away forever?

Do you know that that child and his siblings may now grow up unloved uncared for and with a lifelong trauma?

Do you know the weight of the crimes you have committed against the poor and the helpless?

The fact that no less a person than our former Vice President, Sam Sumana openly accuses EBK of sacking him because he Sam refused to sign up to the conspiracy of “silence” that was requested by the “scientists” who brought the Ebola disease to our country is a severe issue in itself.

After “signing” the papers (for only God knows how much dollars), you sit and watch our people die in their thousands, including our excellent doctors, and you swallow the money meant to fight the diseases!

Even a dog will not do that to another dog!

So President Koroma, if you insist that you are not responsible, then WHO IS?

These are some of the questions that you and your Tolongbo cohorts will someday be made to answer. Either here on God’s earth or before God himself!

APC you have stolen monies from the dead; you have taken monies meant for orphans, you stole payments intended for students, but this HAJJ KOPOR (money) was meant to be used to serve God.

You disgraced the Muslims by forcing them to stop their Life’s journey in the corridors of Youyi building (hence the name “Alhaji or Haja youyi”).

You will face your disgrace!

You provoked Allah by tampering with monies meant to be used to facilitate his worship,

Allah will surely deal with you!

Tolongbo thieves, you are a disgrace to our country!

You have no shame or empathy!

Your greed knows no limit or caution!

I feel sorry for those who dance for you, but more especially for anyone who votes for you because YOUR ACTIONS AGAINST OUR NATION IS THAT OF THE DEVIL’s.

May God save our country from the bundles of ALAKI that is loaded on your heads as you head for hell!