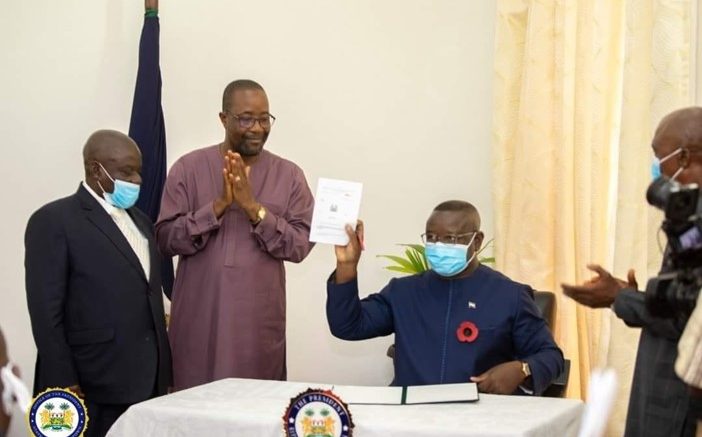 Olu Gordon, one of the fighters for Press Freedom is dead but he will be celebrating in his grave for the death of the obnoxious 1965 Public Order Act, especially Part 5.

Olu Gordon, one of the best critical political writers in the sub-region fought a fight for media freedom but he didn’t survive to see this day.  Our senior colleague fought a fight against the repressive act of our political leaders under the dictatorship regime of late President Siaka Probyn Stevens who muzzled and suppressed journalists because they never wanted to be accountable to the people.  When alive, he prayed for a sincere leader, a true democrat, a staunch advocate for democratic good governance. His much anticipated dream has been fulfilled and President Bio gave his Assent on Wednesday, 28th October, 2020 at State House in the presence of Journalists, Development Partners, Government officials and Human Rights Defenders.

Journalist Harry Yansaneh shed tears in his grave! He died in the brutal hands of wicked political thugs. Pa. Koker, my senior colleague at the Africa Young Voices Media Empire is no more but prayed for this day to come.

On this year’s World Press Freedom Day, Al Jazeera reported that nearly 350 Journalists were in detention across the world but Sierra Leone was/is an exception.

As the father of the country’s democracy, Julius Maada Bio campaigned that if elected President of Sierra Leone he will repeal the 1965 Public Order Act, especially part 5. This provision, in President Bio’s view is crippling the work of journalists and by extension undermining the growth of the media industry. In line with his campaign promise, the Ministry of Information and Communications in collaboration with the Sierra Leone Association of Journalists (SLAJ) lobbied our Parliament to repeal the 55 years old law.This law deals with Seditious Libel and Defamation. It criminalizes the work of Journalists and even deafening on truth as a defense.

Many Sierra Leoneans including President Bio are of the conviction that it undermines Section 25 (1), Act No. 6 of the 1991 Constitution.

During the tenure of former President Ernest Bai Koroma several attempts were made by SLAJ and other human rights groups but they headed for the rock. He campaigned to win the hearts and minds of all the journalists in order to win the 2007 elections. He stoutly assured that the law was a bad law and therefore should be expunged

EBK will be bowing in shame to witness this achievement.

In the words of former SLAJ President, Kelvin Lewis, being a Journalist is not a licence for reckless Journalism. Many colleague Journalists have faltered and therefore mortgaged the integrity of their profession for “brown envelopes.” Amidst this challenge, I have the unshakable belief that we still have the Amampos, The Richard Quests and the Anas in Sierra Leone.

Indeed journalists are always ready to pick a fight for the people but at the same time dying in silence whilst practicing.

The poorly paid Sierra Leoneans are Journalists. Their human rights are grossly being violated in the newsroom but couldn’t say anything no matter the cruelty of their situation. Even though the Government Minimum Wage is now Le. 600,000, Journalists are still being paid below Le. 300,000 as long as they have Identification Cards to go out and “Coast,” they are still okay.

The current SLAJ President, Ahmed Sahid Nasralla aka De Monk was my boss (Managing Director) at the Africa Young Voices Media Empire before the Ebola outbreak. He hardly hurts a fly let alone to disrespect his subordinates.

SLAJ’ Nasralla is challenged today as the President of our great Association but he is certain that he will use the new amended law to better the lives of Journalists and further sanitize the media industry.

Today, in as much as the media can serve as a channel for national cohesion and a weapon for social and political change, it has not been able to flee the visage of criticism. The media has been accused of compromising their ethical principles by showing awful disrespect for truth and neutrality.

One key challenge is that the ethical standards of Sierra Leone’s media or journalism found in the IMC’s Code of Ethics/Practice are being repudiated by quacks and some so-called professional journalists without any compunction. This is the challenge we are confronted with as a body.

The unanswered question is, what are we doing individually or collectively to address the challenge/s? We can defeat them and make the industry better by attracting quality investment.