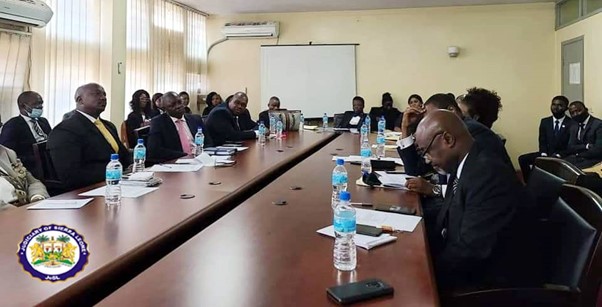 Speaking at the induction ceremony, the Honourable Chief Justice told the newly recruited State Counsel that it was a unique opportunity that they should cherish and jealously guard because they are coming to serve the people and the Government in particular.

The Attorney General and Minister of Justice, Anthony Y. Brewah Esq., whilst welcoming the thirty-one State Counsel said it was the first time the Law Officers Department is doing such huge recruitment, describing it as timely. He said the move was part of the Government’s commitment to improving access to justice and accelerating justice delivery.

According to him, the State Counsel will be deployed across the country to assist the Courts in the swift and timely dispensation of justice. He assured them of a productive career in serving the Government of Sierra Leone. He thanked President Julius Maada Bio for supporting judicial reforms in the country.

The ceremony was graced by the Deputy Minister of Justice, Napoleon Koroma; Supreme Court Judge-Hon. Justice Eku Roberts; the Chairman of Public Service Commission, Mr. K.O. Bah; the Permanent Secretary Madam J.C. Jones and all the heads Department-Office of the Attorney General and Minister of Justice.