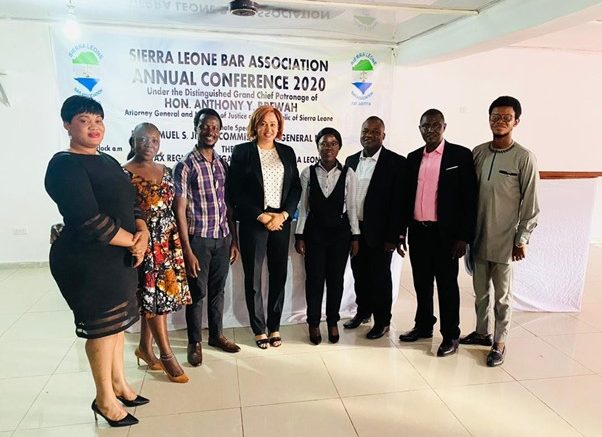 The newly elected Sierra Leone Bar Association (SLBA) President, Madam Michael Eddinia Swallow, was born in Freetown and started her early education at the Freetown Secondary School for Girls. In pursuit of higher education, she gained admission to study Law at Fourah Bay College, University of Sierra Leone. In 2006, she graduated with a Bachelor of Laws with Honours (LL.B. Hons.). She further enrolled at the Sierra Leone Law School in 2007 where she also graduated with the Bar Final Certificate (B.L), Utter Barrister.

As a multifaceted person, she also acquired a Diploma in Mass Communications at Fourah Bay College.

As a razor sharp litigator, she has diligently practiced for over ten successful years until she was elected in April 2019 as a member of the General Legal Council in Sierra Leone.

She is a Life Member of the International Federation of Women Lawyers (FIDA)and a staunch member of the Legal access through Women Yearning for Equality Rights and Social Justice (L.A.W.Y.E.R.S.) since October, 2007.

The current Bar Association President has participated in many local and international research works including the World Bank’s Doing Business Reports 2019: ‘Training for Reform’ and the Legal and Regulatory Framework of Labour Laws in Sierra Leone. As a researcher with in-depth analytical skills, she had conducted many research works including the  Legal Issues Arising out of Developing Oil and Gas Reserves in Developing Countries: Sierra Leone a Case Study.

She has won so many local and international awards such as 2017 Lawyer of the Year Award by Nexte Awards.

The SLBA elected President is a creative thinker with attention to detail and excellent communication skills which is essential for the success of the Sierra Leone Bar Association. She was elected in Kenema on Friday, 13 November 2020 at the Albertson Hotel in Nongowa Chiefdom.