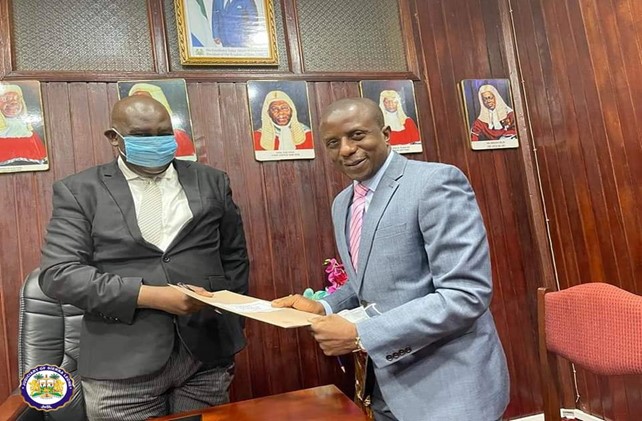 Notaries Public are officials appointed not only to deter fraud but to serve the public in non- contentious matters including witnessing the signing of documents and verifying various signatories, instruments that is, probate of wills, conveyances etc. They are also authorised to authenticate documents such as Estates, Deeds, Powers of Attorney, Affidavits, Licenses, Contracts and Loan documents.

“Your appointments demand that you should be persons of integrity because your job requires a lot including but not limited to authentication, certification, attestation of signatures with respect to documents to be used abroad,” said the Hon. Chief Justice, adding further that such a task requires people with integrity.

Hon. Chief Justice Edwards admonished them to be extremely vigilant in ensuring that they don’t affix their seals on any document that will bring disrepute to the country’s legal profession.

Reposing confidence in them, the Hon. Chief Justice said he has no doubt that the persons appointed will discharge their duties with integrity and probity because they are persons of unblemished characters in the Sierra Leone Bar Association.

Among them were the Permanent Ambassador to the United Nations Michael Imran Kanu; the Commissioner of the Anti-Corruption Commission (ACC) Francis Ben Kaifala; the Deputy Attorney General  and Minister of Justice-Umaru Napoleon Koroma; Ambassador Adekunle King; the President of the Sierra Leone Bar Association Madam Eddinia Michaela Swallow; Deputy Minister of Foreign Affairs and International Cooperation-Solomon Jamiru; Abdul Karim Kamara, the Deputy President of the Sierra Leone Bar Association among others with reputable characters.

Appreciating the Hon. Chief Justice on behalf of his colleagues, Lawyer Abdul Karim Kamara said they were gratified and extremely honoured for the confidence bestowed on them. He said many are looking for such an opportunity to serve. He therefore said it is an opportunity they should jealously guard and cherish.

“My Lord Chief Justice, there is no honour that is greater than this for us the recipients and for this we are grateful,” Lawyer Abdul Karim Kamara said.

In exercise of the authority vested in him, the Hon. Chief Justice has the power under Section 2 of the Notaries Public Act, Chapter 13 of the Laws of Sierra Leone, 1960 to appoint fit and proper person from the Sierra Leone Bar of over ten years standing as Notary Public and the same to perform the duties and exercise the functions of such office anywhere in country.