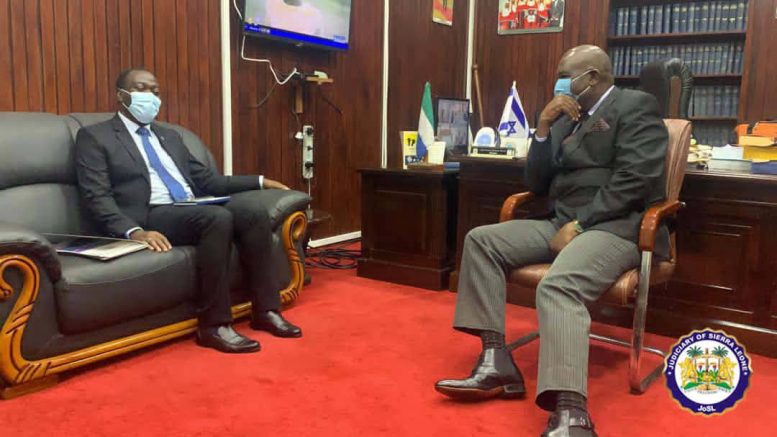 The United Nations Resident Coordinator, Dr. Babatunde Ahonsi, has told Sierra Leone’s Honourable Chief Justice, His Lordship Justice Desmond Babatunde Edwards that he was impressed with the huge reforms so far as the Judiciary is very fundamental in building a better Sierra Leone.

The UN Resident Coordinator said he arrived in the country on 25th September 2020 and resumed work on the 28th of September. He noticed that the UN has a longstanding relationship with the Judiciary, which he is ready to strengthen to achieve the Sustainable Development Goal (SDG), 16. The SDG, 16, aims to promote peaceful and inclusive societies for sustainable development, provide access to justice for all and build effective, accountable, and inclusive institutions at all levels.

He commended the current administration headed by Justice Edwards for progress made in protecting women and girls’ Human Rights. He assured of supporting the Judiciary to achieve their mandates.

Inspecting the Sexual Offences Model Court, the UN Resident Coordinator saluted the Chief Justice and said he was glad that Justice Edwards was accorded the opportunity to serve his country in such an enviable capacity. He also handed a copy of the UN magazine to Justice Edwards.

Simonette Rossi, the UN Peace and Development Adviser asked if there were any documented reports on the Death Penalty. She continued that they are also interested in progress reports to ascertain adherence to the moratorium.

Welcoming the UN team, the Hon. Chief Justice said there are two sides to the arguments for or against the Death Penalty. He however confirmed that since a moratorium was slammed that provision has not been effected.

He averred that to enhance access to justice, fair and expeditious trial, the Judiciary has cascaded the High Court Criminal Sessions across the country in places such as Kailahun, Kabala, Mattru Jong, Moyamba, Magburuka, Pujehun, Falaba Port Loko

According to the Hon. Chief Justice, seven new High Court Justices have just been appointed, three promoted to Court of Appeals and eleven Magistrates have also been appointed.

“To address the issue of decongestion, forty-five prisoners were released on ‘Habeas Corpus’ proceedings during the Judicial week, September 2019,” said Hon. Chief Justice, reiterating further that, “they were kept behind bars for a different number of years without trial and I think it was wrong and against the principles of natural justice.”

He said while his administration will no longer wait for aid before executing its functions, “we would still welcome those donors who will take it on themselves to partner with us. Together we can achieve the SDG 16.”