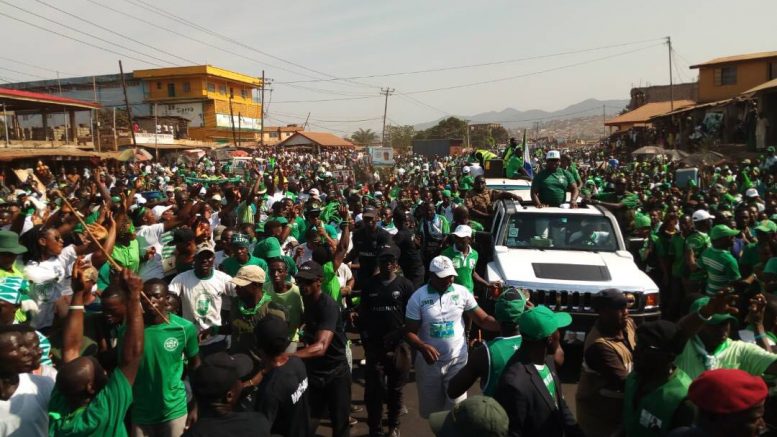 Freetown is colorfully green today, February 26, 2018.  What a day!  Monday, February 26 was the SLPP DAY Of GREEN.  Everywhere in Freetown, all one can see was a sea of Green.  Support for the Party’s in the battleground of Freetown has risen and, continue to expand as we get closer to March 7, which is the day of the elections.  Expectations are high and, rightly so.

It just goes to show that any outcome of the elections, other than a victory for the SLPP, is a rigged election.  With the February 26 rally, the SLPP appeal to a broader national consciousness hits right notes into the hearts and minds of the populace.

With elections scheduled for March 7, 2018, February 26 was a day for the Sierra Leone Peoples Party (SLPP) to showcase its popularity and strength in Freetown and by extension, across the country.

The outcome of the elections in Freetown will determine which party forms the next government.  The result of the February 26 SLPP rally points to a victory for Brigadier-General (rtd.) Julius Maada Bio and the SLPP.

The ultimate campaign ground was the Freetown national stadium. It was there that Bio delivered one of his final significant appeals to the nation for support from all Sierra Leoneans.  Bio’s message has been consistent.  He has been there before, knows what it takes and therefore, will hit the ground running.  The future of Sierra Leone is now, and this is not the moment for apprenticeship.

The stakes are high. The mood of the people was excitedly high giving Bio and his entourage a thunderous welcome.  The arrival team included Dr. Mohamed Juldeh Jalloh, the running mate,  the dynamic National Campaign Chairman, Alie Sanjan Kabba, the Deputy Chairman and Leader, Mr. Umaru Dumbuya, Secretary-General, Umaru Napoleon Koroma and other prominent party officials.  They headed straight to the stadium bowl in grand style.

The entry into the Freetown stadium bowl signifies the long and lengthy journey the SLPP has traveled over the course of this elections.  If anything, the sheer number of people that came out to support the party is proof that the party can survive all the negative energy that the ruling party has thrown into its membership using all nefarious and fraudulent methods to destroy its cohesiveness.

Furthermore, today’s Green Day rally is Freetown proves another thing.  The people love their SLPP. Unlike the APC which had to buy T-shirts and pay people to wear them, for the SLPP rally, People bought their T-shirts and party paraphernalia.

It just goes to show that any outcome of the elections, other than a victory for the SLPP, is a rigged the election.  With the February 26 rally, the SLPP appeal to a broader national consciousness hits right notes into the hearts and minds of the populace.

With Freetown Rally, APC Is Nervous

In an unrelated “BREAKING NEWS” making the rounds on social media, two government vehicles were apprehended by police in Eastern part of Freetown. They have been identified as a black Jeep with green number plates and, an ambulance without number plates.

Furthermore, according to the reports, the drivers were working under orders and directives of the APC Presidential Candidate, Dr. Samura Kamara.

The Minister of Internal Affairs, Major Ishmael Sengu Koroma is heard angrily rebuking and, threatening a Superintendent of Police with dismissal unless he immediately releases the vehicles. The audio of his unprofessional behavior is making the social media rounds.

The brave policeman, responding (on the same audio recording) is heard saying that he would only affect a release if ordered to do so by his Local Unit Commander (LUC).

Furthermore, no drivers are missing.  Samura Kamara’s presence at the police station is nothing but a deliberate cover-up and distraction.

For just the wrong reasons, in another breaking News development making the rounds on social media, and, allegedly confirmed by AYV Media, Dr. Samura Kamara’s convoy came under attack, and two of his men have gone missing.

We remember that on Tuesday, February 20, 2018, in Khamalo, the hometown of the APC Presidential Candidate, Dr. Samura Kamara, the APC candidate caused his supporters to inflict mayhem on Bio and members of his entourage in an attempt to assassinate the SLPP Flagbearer in the Karene District.

What Samura Kamara and his handlers are doing is creating a deceptive situation to deflect the Khamalo violence and present SLPP as similarly violent.  Nothing can be far from this.  SLPP has and will always remain a peaceful democratic political party.

The APC Candidate is on a misinformation mission in Kenema because it is the stronghold of Bio and the SLPP, making it look like it is a revenge reaction.

According to reliable reports from Kenema, the so-called attack by SLPP supporters on Samura Kamara and his men is a deceptive ploy by the candidate to get his government involved in disrupting the peaceful electioneering process in the SLPP stronghold of Kenema.

Furthermore, no drivers are missing.  Samura Kamara’s presence at the police station is nothing but a deliberate cover-up and distraction.

The APC had hoped that the opposition would not get a single vote from Freetown and in the northern territories.  They are in for a rude awakening.

With Freetown Rally, SLPP First Round Victory Now A Reality!

According to one social media observer, Freetown is up for grabs.  No, it is SLPP’s to Win!  The dividing line between SLPP and APC is glaringly apparent. The presence of other parties like ADP, NGC, and C4C make it difficult for APC to pull a 2007 or 2012 victory feat in Freetown.

The APC had hoped that the opposition would not get a single vote from Freetown and in the northern territories.  They are in for a rude awakening.

Even in their state of denial, it is now glaringly apparent that the combined opposition parties will capture somewhere between 65 and 70 percent of the votes in Freetown.

The chances for runoff are getting slimmer by the day and night.

The National SLPP Campaign Chairman, Dr. Alie Kabba, reiterated that same feeling at the February 26 rally at the National Stadium.

It is the SLPP goal to win the election first round.

By the look of things, it is now more possible than ever before to do so.  The reason being, people are joining and showing SLPP love by the leaps and bounds, every week.

Reports from our observers indicate March 7, 2018, Elections in Sierra Leone, West Africa,  will be more of a contest between two unequal Giants – with the SLPP more stronger.

On the one hand is the weak incumbent, All Peoples Congress (APC), led by former Finance Minister Mr. Samura Kamara.

Bio comes with a solid resume.  He is retired from the Republic of Sierra Leone Armed Forces and, being a former Head of State; he bears the unique title of Father of Democracy in Sierra Leone.

At the moment,  Brigadier-General (rtd) Julius Maada Bio is leading in the polls according to National Newspapers and main street local pollsters.

Observers are confident the elections will be mostly peaceful.  But with several APC perpetrated battles, this is a matter of wait and see.  As far as SLPP is concerned, it will never initiate violence.  APC  are the ones to watch. They are violent and indisciplined.  If there is any reason to be hopeful for an SLPP peaceful elections participation, look no further than the rallies that the Party has conducted over several periods.