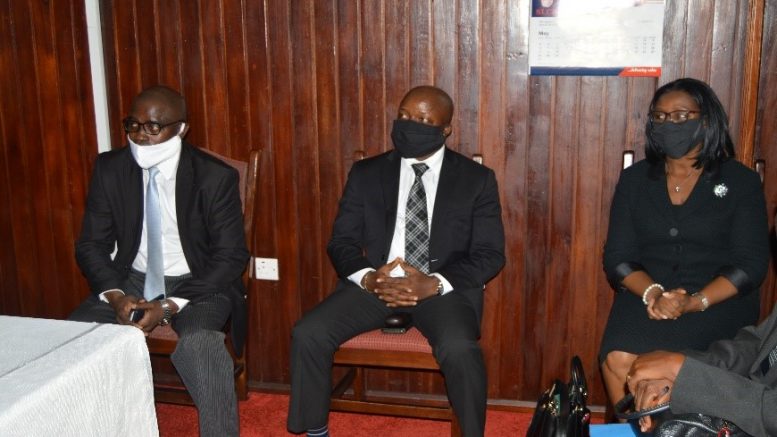 During the ceremony at the Chief Justice’s Chambers conference room, the newly appointed Judges were described as hardworking and committed to their work even during difficulties. The Chief Justice called on them to be more focused as they are not strangers in the Judiciary.

After administering the oath, His Lordship Justice Edwards said, “you have been promoted, but it is an onerous task so let me now congratulate you.” He added that “we want people that can improve the system in terms of quality service delivery.”

He said if the newly appointed Judges were not hardworking and up to the task, they would not have been promoted. He, therefore, assured the public that they will deliver justice impartially and independently whilst discharging their duties.

Justice Fatmata Bintu Aladi is a Barrister at Law of the Middle Temple in England and Wales. She was called to the Sierra Leone Bar in 2003 and started her practiced at the Chambers of the Wright and Co. In her quest of pursuing higher and quality education, she gained admission at the University of Liverpool in England where she graduated with LLM in International Finance and Banking Law.

She was appointed as High Court Judge 2015 and sat on many matters including Mining and trade contracts.

Justice Alhaji Mohamed Momoja Stevens attended the St. Edwards Secondary School in Freetown and later enrolled to study Law at Fourah Bay College, University of Sierra Leone. He graduated with Honours in 2003 and continued at the Sierra Leone Law School where he graduated with a BL in 2004.

A year later, Justice Stevens was appointed as a Magistrate. After his diligent service for eleven years, he was then appointed as High Court Judge in December 2015. As a Judge, he presided on cases in almost all Districts apart from Port Loko and Kambia. He had served as Judge Advocate for the Court Martial at Cockrill in January 2019.

Justice Komba Kamanda started his early education at the Holy Trinity Secondary School in Kenema and the Government Secondary School in Bo, the Bo School before enrolling to study Law at Fourah Bay College, University of Sierra Leone. He graduated in 2003 with an LLB Honours. He was called to the Bar in October 2004 shortly after his BL at the Sierra Leone Law School.

Commending the newly appointed Justices, Supreme Court Judge-Justice Alusine Sesay said they are not strangers in the Court of Appeal. He said much is expected of them as the Chief Justice never doubted them which was why he reposed confidence in them to be appointed.

They all expressed similar sentiments and thanked the President, His Excellency President Julius Maada Bio for the appointment. They also commended the Chief Justice for according them the opportunity to serve the Judiciary in this esteemed capacity.