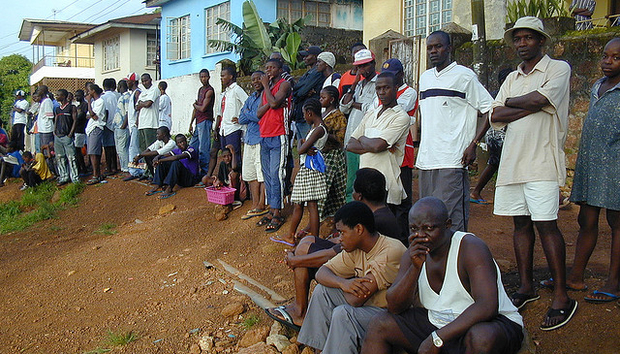 AFROBAROMETER SURVEY: THE PEOPLE HAVE SPOKEN!

The New Direction manifesto went to great lengths to indicate how the SLPP would improve the economy. To be fair, some of the promises have been implemented with relative success…Andrew Keili

The people have spoken! I recall an incident in the 2010/2011 campaign for the SLPP flagbearership in Kenema. All of us 19 aspirants were present at a gathering of our supporters and the general SLPP membership at the Holy Trinity hall. Our Chairman, John Oponjo Benjamin “summarised” his speech in one hour and only gave each one of the aspirants 5 minutes to make our sales pitch to the audience, advising us that ”brevity is the soul of wit”! The speaking sequence was balloted for and aspirants tried their hardest to appeal to people in the five allotted minutes, with the audience listening intently.

When it was Maada Bio’s turn -I think he was sixth, there was a sudden invasion of masked devils into the hall and on to the stage, led by a wily J.J. Saffa. A well-proportioned Bondo devil nearly knocked me over-I suspect I know who was under the mask! Gorbois, Gafa gortuis, Jobais and other Mende masked devils danced around Maada Bio, holding his hands high and Gorbois made their usual fun.

I recall Alpha Wurie, muttering underneath his breath- “Which kine nonsense dis? I laugh my head off anytime I recall this incident. Well, the people have spoken on the performance of this government.

The recent Afrobarometer report- “Di gron still dry’ Sierra Leoneans increasingly concerned about the economy” by the respected Institute of Governance Reforms (IGR) makes for an interesting read. Afrobarometer is a non-partisan, Pan-African research institution conducting public attitude surveys on democracy, governance, the economy and society in more than 30 countries. People were interviewed on various issues bordering on the performance of government.

Nobody can better IGR’s report; so I will only attempt to comment on some of the issues raised to bring some awareness on what people really think about the performance of government.

Issue 1-The country is not going in the right direction

Issue 2-The economic situation is bad and poverty is rife

Just one in 10 Sierra Leoneans (11%) describe the country’s economic condition as “fairly good” or “very good.” Negative assessments (84%) have almost doubled since 2012 (46%). The government receives lower approval ratings on its economic performance than on other issues. Fewer than two in 10 respondents say the government is doing a good job of handling the economy (19%), improving living standards of the poor (15%), narrowing income gaps (10%), creating jobs (10%), and keeping prices stable (7%). A preponderantly high proportion of people frequently went without cash income, experienced medical care shortages and shortages of clean water and food.

In an earlier study in IGC’s SIERRAPOL–“Stop the blame game: Take responsibility” the pooling seems to indicate that unemployment, shortage of food and rising prices of essential commodities are the greatest worry for a majority of citizens. Only ten percent of citizens believed the government was doing well in managing prices of goods. Similar low percentage were recorded for government’s ability in making food available (14.5 percent) and providing jobs (24.7 percent). These are alarming figures that bear out the poverty statistics. We simply cannot feed ourselves! Food prices have remained high. Our poverty statistics indicate households spend on average 63% of their total expenditure on food. It is ironical that our very own food producers-the farmers are the most food insecure. The incidence of poverty is highest in the agricultural sector, with about 79% of those engaged in the sector being poor.

The New Direction manifesto went to great lengths to indicate how the SLPP would improve the economy. To be fair, some of the promises have been implemented with relative success, but it is worth mentioning others which have been given short shrift. Apart from general macroeconomic policies outlined, the manifesto was bullish about introducing a partial guarantee scheme to provide loans to high potential private sector entities, in order to reduce the cost of finance for investment, revamping the mining and tourism sectors, rehabilitating existing laboratories for fish quality and support accreditation to certify fish and fisheries products for export to the EU and other foreign destination and establishing Special Economic Zones (SEZ) and Export Processing Zones (EPZ. Despite the rhetoric, many of our productive sectors are on life support and some suffer from self-inflicted wounds.

The promise was also made to tackle the issue of “uncontrolled wages and salaries caused by bloated public sector through presidential appointments and establishment of commissions that largely usurp the line Ministries’ functions, unregulated wage increases, double or triple dipping of salaries and pension as well as uncoordinated recruitment across the public sector”.
Undertakings were also made to control government waste like that relating to government vehicles- “Reducing this cost (of using government vehicles) by at least 50% will make Le3.3 trillion in 5 years. Concrete measures will include reducing spending on purchase of V8 vehicles, introducing pool vehicle system in the public sector; staff bus service for junior workers and vehicle loan system for certain categories of public sector workers”.

The New Direction manifesto made uplifting statements about “diversifying production of food, including crops and animals, on a scale sufficient enough to feed the growing population as well as providing gainful employment while maintaining the natural resource base”. Consideration would be given to “putting mechanisms in place for public and private partnership in tractor management and providing support for rehabilitation of existing plantations and establishment of new ones”. Promises were also made to “support Njala University and proven poultry farmers to establish and expand on hatcheries that will ensure the supply of adequate day old chicks to meet the growing demand in the country”.

All very good on paper.

The manifesto stated thus: “The New Direction SLPP Government will make every citizen of Sierra Leone to feel and believe they are an integral part of an inseparable and indivisible country. It will promote inclusive politics, inclusive governance and inclusive development as the only guarantor for enduring peace and security. The next SLPP Government will launch a Presidential Initiative that will be heralded by a national conference on diversity management and rebuilding of national cohesion.”

Recent incidences and persistent utterances by diverse groups would tend to bolster the perception that national cohesion at present remains a forlorn hope. The National Peace and Reconciliation initiative seems to have stalled.

Issue 4-So many problems to handle

While management of the economy ranks sixth among the most important problems that citizens want the government to address, food shortage/famine – which is also clearly related to economic management – is No. 1. Respondents were asked: “In your opinion, what are the most important problems facing this country that government should address?” (Respondents could give up to three answers). The results were Food shortages/famine 40 %, Education 38%, water supply 37%, Infrastructure / roads/ 37%, Health 34%, management of the economy 27%, electricity 21%, unemployment 17%, Farming/ Agriculture 7%, Loans/credit 7%. Sierra Leone’s problems are pervasive and spread across all sectors.

Issue 5-People are still hopeful for the future

While assessments of the present are gloomy, respondents are more hopeful about future economic prospects. Only a quarter (24%) say economic conditions are better now than a year ago, but four in 10 (42%) expect things to improve over the next 12 months. Optimism rose spectacularly in the Eastern and Southern regions (by 56 and 49 percentage points) with the change in government in 2018, but has declined in all four regions since then. It is lowest in the Northern region (31%).

There is a regional variation in the perceived direction of the country. Residents of the Southern and Eastern regions (the current ruling party’s strongholds) are more than three times as likely to express confidence that the country is moving in the right direction.

This report should be required reading and assimilation by anyone who wants this government to succeed. It is obvious that with only a third of people being satisfied with our direction as a country and with so many perceptions on various issues, bordering on the negative, it behoves the government to take another look at its performance. To understand why some countries are mired in poverty, it is necessary to look beyond broad macroeconomic policies, such as interest rates and budget deficits, and also consider the myriad laws, investment regulations, and other issues that hold back productivity of industries and thus the nation’s prosperity.

The private sector needs to grow. We are just not producing enough to have a vibrant economy that will address our myriad needs. Dissatisfaction with the direction of the country by two thirds of the populace is a serious issue. It is obvious that the statements made in our local parlance-“D gron dry” and “Man den nor gladi” are not vacuous statements. They really reflect the people’s views. The people have spoken and now the “talk and do” SLPP government must listen, talk less and do!