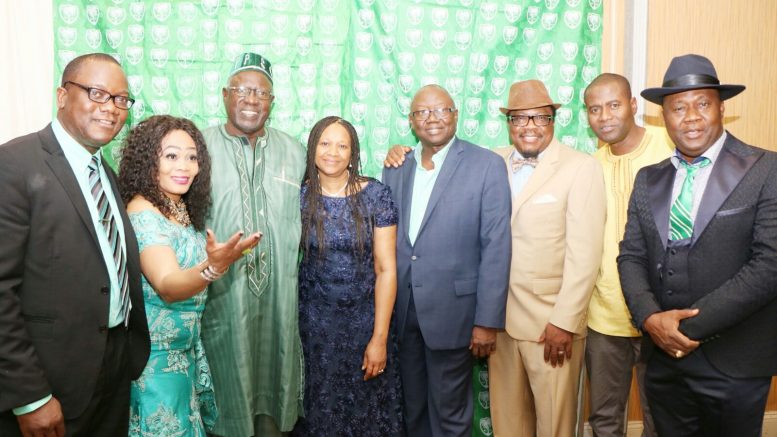 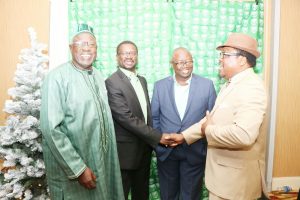 Alhaji Kanja Sesay is the SLPP Chairman for Bo District.  He is back home now in Sierra Leone after a brief hiatus in the United States.  The Deputy National SLPP Chairman and Leader is Umaru Dumbuya.  He is still in the US working the phones to leave a more unified SLPPNA when he leaves for Sierra Leone in January.  Both gentlemen have done an impressive job bringing the nearly disintegrating SLPP North America region together after the notorious KKY fiasco.

Resolving the SLPPNA issues in a crunch time has never been an easy task.  However, with abundant patience and several consultative meetings, with much welcome help from the National Campaign Chairman, Alie Kabba, Kanja Sesay, and Umaru Dumbuya contributed immensely to getting 45,000 dollars remittance to the SLPP National Campaign coffers from North America.

BETRAYAL AND NEAR REGIONAL DISINTEGRATION BY KKY MOVEMENT

Remnants of former frustrated Usu Boie and APC supporters swelled the regional SLPPNA Party ranks, vying for strategic positions with funds from dubious sources.   The sole purpose of such strategy was to dominate and weaken the loyal SLPP members and, to skew the delegate’s roster to favor the KKY Flagbearer candidacy.

In the ensuing competitions at various regional positions, most diehard regional Party members with leadership ambitions metamorphosed into the KKY Movement.  Emerging from this new alliance for most people was an opportunity for leadership in the SLPPNA and its Chapter levels.

There may have been a genuine embrace of KKY as an SLLP by most of the faithful SLPP members.  But, they were acting in the minority.  When their designated Flagbearer aspirant finally quit the SLPP, creating his NGC, the wave went along with him, leaving the few SLPP diehards with the KKY Movement under the constant spell of suspicion by the SLPP members.

The KKY betrayal of regional SLPP NA members brought party activities to a standstill.  Distrust and anger have taken over the region.  The local leadership came under rigorous scrutiny.  Even some Chapter members felt the angst of the broader membership.

In this stalemate, enters Alhajie Kanja Sesay and Umaru Dumbuya. 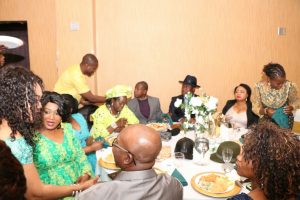 It began in New Jersey.  At a well-attended and beautifully orchestrated inaugural dance and fundraiser, both Umaru Dumbuya and Kanja Sesay were the guests of honor.  Umaru Dumbuya delivered the Keynote Address, while Kanja Sesay narrated the challenges facing the Party and the need for funds to match the competition.

The following day, a brief meeting between Kanja and Umaru with some select members of the New Jersey Chapter led to a more prominent Chapter Party meeting at the house of one of the local members.  Once all grievances were addressed, the New Jersey Chapter, having fulfilled all their obligations to the region voted to release 10 thousand dollars for remittance to the Party in Sierra Leone.

This single leadership move, coupled with prior cooperation with the region and the National Secretariat, makes New Jersey the current SLPP Gem in North America.

Dr. Lawrence Sandi is the SLPP North America Chairman.  It is the custom for the SLPP Regional Chairman to inaugurate incoming Chapter heads.  Dr. Sandi did that for the SLPP Washington DC Chapter.  But he was a no-show at the New Jersey Chapter leadership inauguration.   Whatever the reason, is irrelevant now.  The New Jersey meeting was instructive in engaging Chairman Sandy.

Dr. Sandi first became SLPP NA regional Chairman due to a different type of discontent in the region under Jerry George.  By the time he got into his second term, a new challenge has emerged on the horizon.  Whether the KKY infusion posed any problem, only Chairman Sandi can explain.  But it did provide an opportunity for him to secure a second term.

In SLPPNA, as in Sierra Leone, Elections by themselves have their disintegrating dynamics.  Before the wounds of the second term elections could heal, the KKY saga burst onto the scene, and the once vibrant and dynamic region fizzled into a state apparition of its former self.

The explaining, resignations, accusations, and suspicions became the order of the day, and the entire Sandy executive became suspect closeted KKYs.

The Regional Secretary-General confessed that he was once KKY, but with KKY’s  departure from the Party, he ceases from being a member.  People want to hear that open proclamation from Chairman Sandi, but it is yet to happen.

What has happened is that Chairman Sandi has actively supported the transmission of 35 thousand dollars of the SLPPNA funds to Sierra Leone.  He promotes active fundraising.  Time will tell and heal any existing wounds.  For now, it is Party time and, no looking back.

The quiet diplomacy by Umaru Dumbuya and Kanja Sesay might better explain why dealing with these issues at all levels, employing different strategies, could give us back our Party, allowing KKY sympathizers to save face and rekindle the active regional desire to raise funds and support the Party at home.

BEYOND THE DOUBTS, THE SUSPICIONS AND RECALIBRATING FOR SUCCESS

Chairman Sandi has officially updated the region, emphasizing that the Party Conference approved the approval to remit 35 thousand dollars by the Executive to Sierra Leone.  This constitutional reference is essential.  It reflects a functioning system that is capable of strengthening itself.

Democratic institutions can face moments of distractions but are capable of interior renewal which guarantees sustainability.  Moments of glory will phase out moments of doubts.

The SLPP NA region is embarking on fundraising.  There are ongoing fundraising discussions, and the outcome of this debate can only be positive when trust can return.  That is what is happening right now, and credit can go to all the movers and shakers, especially the diplomatic efforts of Bo District Chairman, Kanja Sesay and, National Deputy Chairman and Leader, Umaru Dumbuya.

*Is there a newsworthy incident or event happening in the SLPP that you want SLPP TODAY to cover? Tell us what is happening by Joining this group, and have it published.*

DEATH IN THE SLPP HOUSTON CHAPTER

Legacy Of Kabbah In Farewell Speech to Parliament