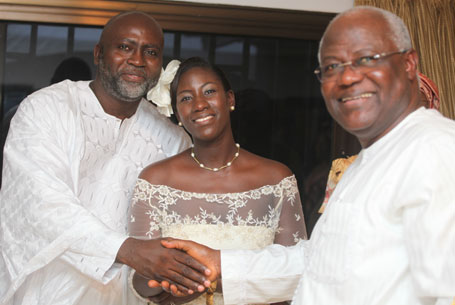 A despicable APC Alejo, more readily known by his nom de guerre What-A-Man is seen here piggishly insulting Sierra Leoneans by chanting the insinuation that the APC has sold the land to their Chinese godfathers and that there is nothing anyone can do about that.

What-A-Man whose real name is Sylvanus Koroma is the younger brother of President Ernest Bai Koroma.

Here is a man whose day job was pumping petrol in cars at the NP fuel station by Freetown cotton tree (and gagging for 2,000 leones tips) before his elder brother’s ascension to the Sierra Leonean presidency in 2007.

Fast forward, Sylvanus Koroma, like most members of the Koroma clan, is now heavily a-washed with more cash than the brain cells stuck in his skull.

Sylvanus is now a shareholder in most of the companies in the country in addition to being the sole importer of Sierra Leone’s staple food, rice, the price of which keeps shooting up at killer rates way beyond the buying reaches of many a hungry citizen.

“Dem say when a notorious CABAL wan for Alaki, Satan go mislead dem for dae provoke dae people dem wae dem dae oppress“ meaning, when the criminal is about to fall, they provoke their oppressed victims.

History is unforgivingly replete with the horrific outcomes of such sorry stunts.

The French Revolution was sparked off by the king’s wife, Marie Antoinette who carelessly dismissed the hungry French masses who were crying that there was no food. The sentence: “let them eat bread” led to a revolution and her death as well as the demise of her family at the hands of the irate mob.

In neighboring Guinea, after the death of Sekou Turay, his younger brother, Ishmael Turay, thought that the then Prime Minister, Lansana Beavogui, was not fit to lead the country.

In the ensuing negotiations for succession, Ishmael is reported to have slapped Beavogui.

That dispute resulted in a coup by Diara and Conteh which later led to the mass slaughter of the Sekou Turay family, including Ishmael, Siaka, and Amara.

All over the world, we have seen powerful  Dictators physically chased out of power. In West Africa we have had our fair share of this UN-LEARNABLE LESSON: From Blaise Campaore in Burkina Faso to Laurent Gbagbo in Ivory Coast, megalomaniacs and their families never learn from the harrowing experiences of their irreverent kind.

May God help all innocent Sierra Leoneans and perish those who are arrogantly oppressing the people and getting drunk on their mischief, even as they drive us into the disgusting ditch of their infamy!