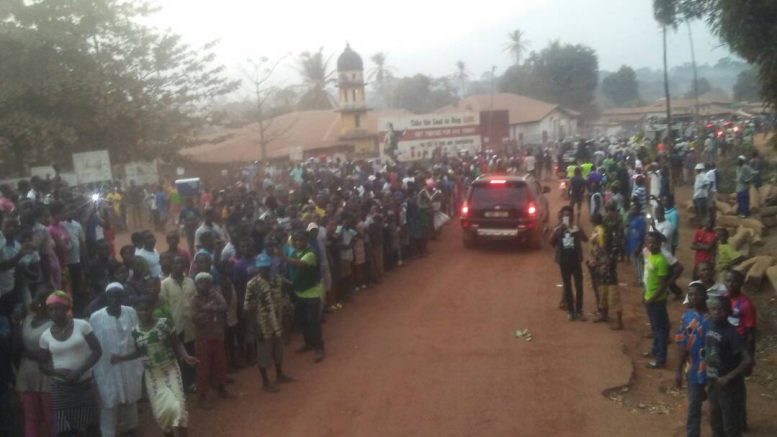 Just In Case You Were Wondering Where Alpha Timbo Is… 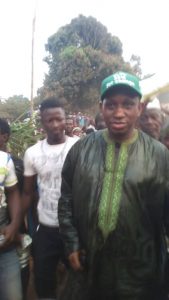 This is one of our senior Stakeholders, the indefatigable Lawyer, our very own honorable Alpha Timbo.

He is right in the midst of things (as you can see him here in the greenest of green colors right in the center of Kamakwie) doing more than his fair share of the heavy lifting!

This is a solidly constructed train with strong wise men and women who are capable of “full frontal assault”, as well as “delicate mopping up operations” at every stage of the journey to State House.

If I were to tell you where brother JJ Saffa is right now (for example), or what he is doing, I would be leading the APC to scramble spies to copy whatever he is doing to ensure that they mess up our clean road to success, because that is the only  thing the APC is good at.

So please ask not where anyone is at any point in time because we would not want to teach our rivals how to WIN GENUINELY.

We want to enter State House (through the main door) long before they can find the key to the exit door at the back!

Just be rest assured that this is the best-organized campaign outfit that has hit the ground running and is determined to make sure that the cry of the people is heard everywhere and is ultimately realized in State House:

So we are ORGANISED, we are PLANNED, we are SOLID and we are very, very and very FOCUSED!

ONE COUNTRY, ONE PEOPLE

Trying to chase out a few but a highly determined bunch of crooks who have held our country to ransom and are doing everything to empty it completely and tear it to pieces!

To that we are saying: 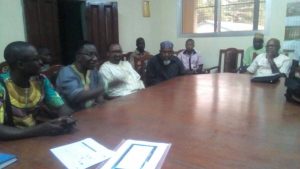 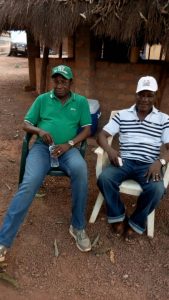 And guess who went ahead of the team to “smoothen” the road through the “traditional greetings” of elders?

Well, you can see him seated right here in the most relaxed mood with the Paramount Chief of Kamakwie.

Our leader and chairman, Dr. Prince Harding, was busy mapping out the Ataya bases in Kamakwie long before the Green train arrived in town!

SO YES, this is a very strong very united PARTY running a highly organized campaign with so many moving parts that even if the APC continue to study our footsteps they wouldn’t be able to know what is coming next and how.

We are on top of their “99 tactics” and they may not even know it, or know what to do about it because our goal is to SCORE THE GOAL against a shivering goalkeeper who is so heavily weighed down with so much loot and sin it doesn’t know which way to look!

By Abdulai Brima – a London-based Sierra Leonean Social Media  Commentator on current issues dealing with Social, Political and Cultural events as they unfold by the hour.