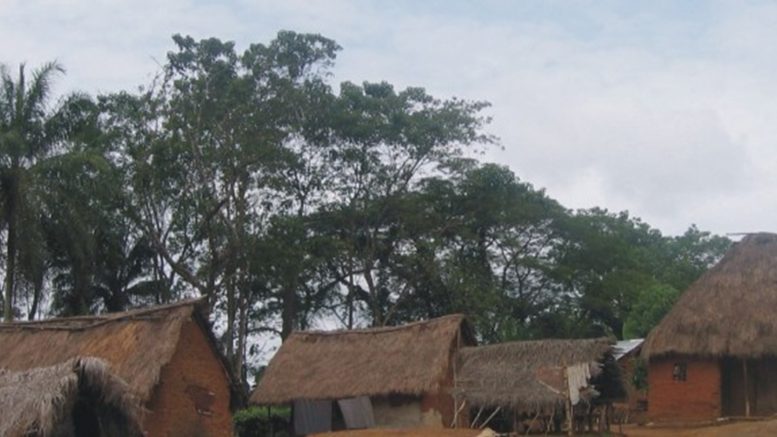 In November 2011, I was one of those investigative journalists (writing for The Reporter Magazine based in Ethiopia) that visited Yenga, a village in Kissi Teng Chiefdom, Kailahun District, Eastern province of Sierra Leone.

My article was widely published in some local newspapers especially the Concord Times Newspaper and All Africa News online:

Even though Yenga is originally inhabited by the Kissi people, the village itself has attracted more Guineans because of several benefits including illegal smuggling, mining, farming and business related activities. Yenga borders with the Moa/Makona river, which separates the Republic of Guinea and Republic of Sierra Leone.

Before Sierra Leone’s civil war, Yenga was prominently known for its fishing and agricultural activities not until the Revolutionary United Front (RUF) rebels occupied the place and religiously engaged in alluvial diamonds. Thereafter, mining and agriculture became the major economic activity of the people.

During that war, ECOMOG troops led by the Nigerian army came to help end the country’s civil war. Guinean forces also trooped in the country and some were deployed into Yenga to help repel the RUF rebel.

On Friday, 27th July 2012 Sierra Leone and Guinea declared the demilitarization of the Yenga. This came after series of meetings between former President Ernest Bai Koroma and President Alpha Conde which led to the withdrawal of Guinean troops and their military artilleries. Unfortunately, Sierra Leone troops weren’t allowed access.

In the Communiqué bearing signatories of Sierra Leone’s Minister of Foreign Affairs and International Cooperation, Joseph Bandabla Dauda and his Guinean counterpart, Minister of Foreign Affairs, Dr. Edouard Niankoye Lama, the governments of the two sister Mano River Union states registered their commitments towards protecting, promoting and safeguarding their common heritage of co-existence in the spirit of mutual respect for their identical customs and traditions.

Nigeria and Cameroon had their own experience over the Bakasi peninsula, just as Ethiopia and Eritrea. Sierra Leone has also not been spared from this regional challenge.

Seeking international arbitration by President Julius Maada Bio is also timely and helpful, but the most practical and timely intervention involving the regional bodies is very diplomatic in conflict resolution. This will also be difficult if possible pressures are not mounted to induce the political will in ensuring that the Guinean President adheres to the signed Communiqué by the two countries.  It was reemphasised that Yenga belongs to Sierra Leone.

FAILURE OF OUR PAST GOVERNMENT

The Government woefully failed to fully reclaim Yenga because they allowed the Guinean occupancy contrary to the 2012 Communiqué and 2005 Declaration. I expected the Sierra Leone Government to include Yenga as one of the country’s military Brigades for deployment.

During that withdrawal on the part of the Guinean military, I expected the Sierra Leone Government to create a Police Division headed by a Local Unit Commander with full police presence rather than a Police post with few police personnel. The LUC in Kailahun is not well capacitated to cover Koindu and Yenga because of the distance and other logistical incapacity. There is need to create another police Division in Yenga or Koindu.

I see Yenga to be more useful to Guineans than Sierra Leoneans. Yes, because we have abandoned our people in Yenga to be maltreated by the Guinean military. When I visited Yenga in 2011, I noticed that almost all local languages spoken in Guinea are prominently spoken in Yenga. I also noticed that the medium of transaction is the Guinean Franc instead of the Leones currency.

Yenga is strategically a conduit for illegal border trade, smuggling of drugs such as cannabi sativa (Djamba) and a ‘safe haven for criminals’ from both end.  Among the many benefits, Sierra Leone is at the losing end. I have now been tempted to say that this could be the reason why late President Lansana Conteh was very recalcitrant to withdraw his men.

As a peace and conflict expert, President Julius Maada Bio has positioned himself to the admiration of the international community. He has proved his detractors wrong. He extended his Presidential Clemency to the All Peoples Congress (APC) Minister of Internal Affairs, Rtd. Major Alfred Palo Conteh to demonstrate that he is an Ambassador of Peace.

He has made a compelling submission to the ECOWAS demanding for their intervention to settle the Yenga problem between the two sister countries. President Bio has also communicated that he is sending a high-powered delegation to engage the Guinean Government and also remind them about the Communiqué that was signed between the two countries.

Indeed diplomacy will work successfully. The use of diplomacy, coupled with the readiness on the part of the Guinean leadership must be recognized.

President Conde should be compelled to stick to the Communiqué and the 2005 Declaration to return Yenga to Sierra Leone. This is the best way to save both countries and allow peace over violence. Now, it is President Bio Versus President Conde! Follow me on LinkedIn or superilsannoh5@gmail.com