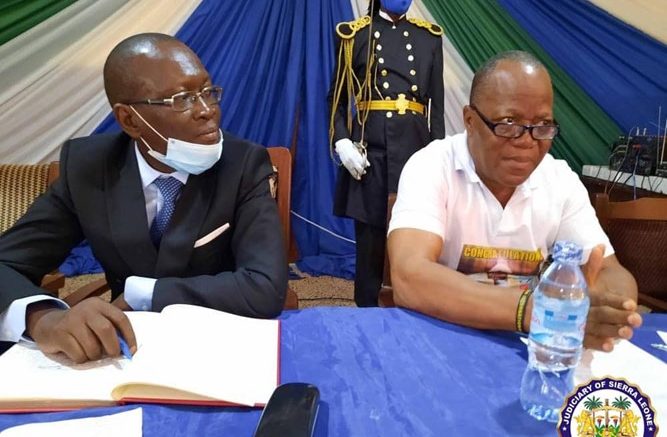 The Paramount Chief of Luawa Chiefdom, Hon. PC Mohamed Sama Kailondo Banya IV said today is a memorable day and the commencement of true freedom for the people of Kailahun. He described the day as “a day for an equitable Justice, one we have been deprived of for decades.”

He said Justice has indeed been brought to Kailahun with the first Resident Judge’s appointment since independence.

He used the occasion to thank His Excellency President Julius Maada Bio for being prudent in appointing ‘the best Chief Justice in the Judiciary history.’

According to him, there was no justice in Kailahun District, and therefore now is the time to support Justice Banks-Kamara to succeed.

Presenting the Resident Judge on behalf of the Chief Justice, Hon. Justice Sengu Koroma JSC said this is the first time a Resident Judge for Kailahun District has been appointed.

“This is a great honour for us as a District,” he said, adding that Kailahun District has now become a force to reckon with in the administration of justice.

Until his appointment, Justice Francis Banks-Kamara J was the acting Master and Registrar, Judiciary of Sierra Leone. He is a British trained Sierra Leonean Lawyer. He holds a Master of Laws in International and Comparative Business Law from the London Guildhall University. His thirst for quality education compelled him to gain admission into the Lumumba University, Moscow, former USSR, where he obtained his International Law Diploma.

The ceremony brought together fifteen (15) Paramount Chiefs from the District.